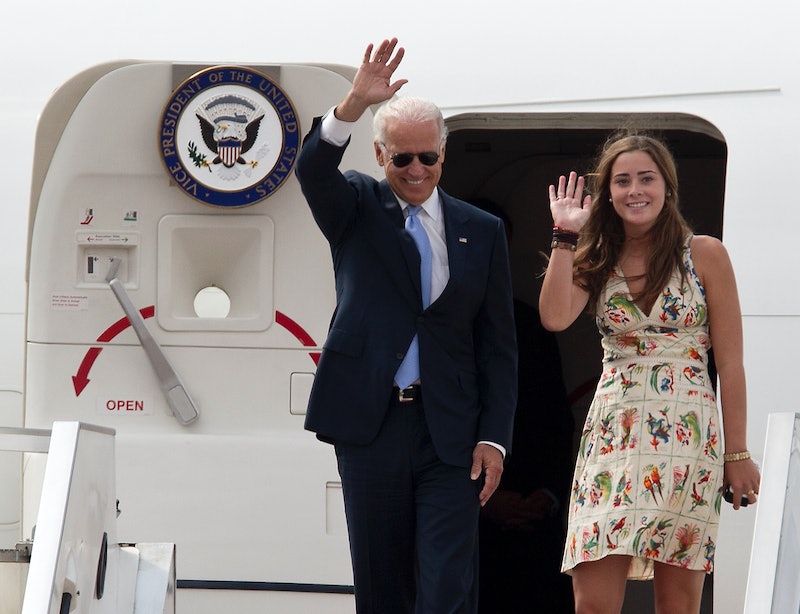 At first glance, Naomi Biden’s social distancing habits follow national trends: Hunter Biden’s eldest daughter is baking with her two sisters via Zoom, confusing her grandparents with the platform's virtual backgrounds, streaming Homeland, learning embroidery, and succumbing to MasterClass advertisements. (She highly recommends Billy Collins’ poetry lesson.) From there, though, her habits diverge — she and her boyfriend, Peter Neal, have also spent their time coding a fully functioning website to help those financially impacted by the coronavirus outbreak.

In March, the couple, both law students, decamped to her family’s waterfront property in Rehoboth Beach, Delaware. They were taking classes remotely — Naomi, 26, through Columbia University, from which she’ll graduate this month; and Neal, 23, from the University of Pennsylvania, where he’s in his first year. They brought Naomi’s dog Charlie, a mini Australian Shepherd, from New York City and settled in.

Meanwhile, Neal's parents’ business was struggling out west in Jackson Hole, Wyoming. As orthopedic surgeons, their practice’s procedures had been drastically reduced during the coronavirus pandemic. They worried about filing payroll. It was destabilizing to watch his parents worry, says Neal, so he and Naomi got to work brainstorming solutions.

“My grandfather has a mantra,” says Naomi, referring to Vice President Joe Biden. “Anytime I complain to him, he'll say, ‘Don't tell me how bad it is. Change it.’ That’s the perspective we approached this with — what can we do, as young people?”

After President Trump signed the Coronavirus Aid, Relief, and Economic Security Act (CARES Act) on March 27, Naomi and Neal planned a marathon study session. “We decided to sit down — originally for our own self-interest, and also out of curiosity — [to see] if we’d qualify for the individual program,” Neal says. In less than 48 hours, they read the 335-page stimulus package. “We started pulling out all sorts of eligibility situations,” adds Neal, who met Naomi in 2018 through a mutual friend with whom he worked on Hillary Clinton’s 2016 campaign. (He’d coincidentally already met the vice president, in passing, during a collegiate internship in the Obama White House.)

“If you don't have time or an understanding of legal jargon, it would be nearly impossible to figure out what you qualify for,” says Neal of the $2.2 trillion relief package, the largest in American history. With phone-call assistance from Naomi’s undergrad friend Will Fry, they coded the website www.MyCARESActBenefits.com, which offers a free quiz to the public. Questions about tax return filing status and salary ranges allow users to quickly ascertain what they, or their small businesses, are eligible for under the CARES Act. (They will be updating the site if new legislation is passed.) Ultimately, they plan to connect users to lawyers offering pro-bono help.

They’ve already had over 10,000 users, including Neal's parents, who received a check in mid-April. His mom was astounded by his competence, Neal jokes. “She called and was like, ‘Peter, I cannot believe this. You and Naomi actually did this.’”

As the presumptive Democratic presidential nominee, the vice president has had to shift his campaigning online during the pandemic, which has provided its fair share of speed bumps. He has also been criticized for his delayed response to an allegation of sexual assault. How does Naomi respond to criticism of her family? “It’s been really hard. It’s painful, but it’s not personal. I know who they are,” she says of family members. “Everybody who knows them knows who they are. It’s easy to tune out.”

Of her grandfather’s relationship with Neal, she adds, “Peter and I have been dating for two years, and he started by saying, ‘Naomi’s friend,’ then ‘friend that’s a boy,’ then, ‘they’re going together,’ and now he says 'boyfriend.'”

Creating www.MyCARESActBenefits.com has solidified how she wants to use her law career. “I’ve become confident that I want to be engaged — and I want Peter and all my friends to be engaged — in rebuilding the country after this is over,” she says. “It's important that young people don't come out of this feeling jaded.”

More like this
What Is Megan Thee Stallion’s Net Worth? The Traumazine Hitmaker Isn’t Worried About A Budget
By Hugh McIntyre
Gemma Collins' Net Worth Is Only Going Up
By Catharina Cheung
What Is Brad Pitt’s Net Worth? The Bullet Train Star Now Makes 8 Figures Per Film
By Hugh McIntyre
A Political Thriller Inspired By The Munich Massacre Is Coming Soon
By Darshita Goyal
Get Even More From Bustle — Sign Up For The Newsletter