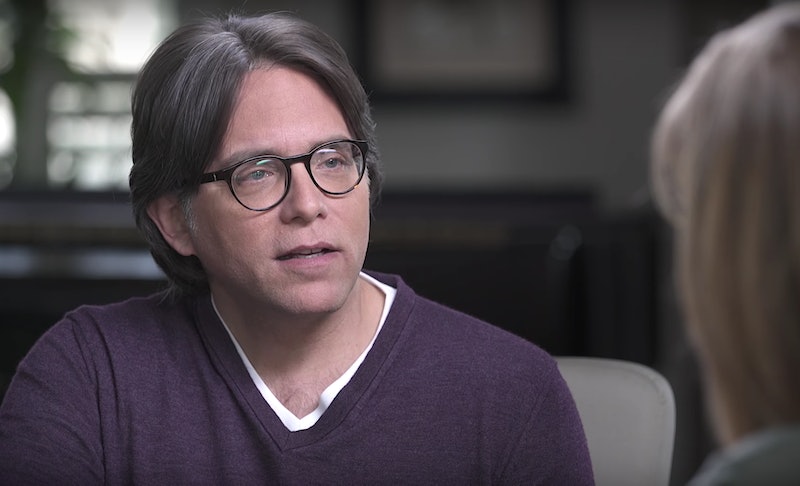 A leader of a secretive "self-help" group based in upstate New York was arrested by the FBI in Mexico and charged with sex trafficking earlier this week. Details of Nxivm, Keith Raniere's cult-like group, allegedly treated women publicly surfaced last year, prompting its leader to flea the country. Raniere is now expected to spend at least 15 years behind bars.

Nxivm's website (pronounced like Nexium, the heartburn relief drug) describes the group as a "community guided by humanitarian principles that seek to empower people and answer important questions about what it means to be human." USA Today reffered to Nxivm as a "cult-like self-help group," and The Times Union of Albany wrote a series on Nxivm comparing it to a cult. Raniere allegedly established a more secretive group within Nxivm called Dominus Obsequious Sororium (DOS), latin for "master over the slave women."

Federal prosecutors believe women in DOS were part of a "slave and master" system, which Raniere has denied (it's not clear whether he's retained a lawyer yet). The women were allegedly expected to have sex with Raniere — who the group refers to as "The Vanguard" — and no one else, according to a criminal complaint. Prosecutors also allege that the women had to attend "ceremonies" during which their pubic areas were branded with Raniere's initials while other group members filmed the ritual.

In a 2017 New York Times report, women who previously belonged to Nxivm said they were required to hand over compromising photos of themselves in order to join. They also claimed they were warned that the photos would be released if they ever talked publicly about the secret group. One of the women, Sarah Edmondson, said she was then required to ask a male Nxivm official: "Master, please brand me, it would be an honor." Edmondson believed she would get a tattoo, but instead a symbol was seared into her skin right below her hip.

“I wept the whole time,” Edmondson told The Times. “I disassociated out of my body.”

When rumors of DOS' existence started circling within Nxivm, The Times reported that members portrayed "a group spinning more deeply into disturbing practices. Many members said they feared that confessions about indiscretions would be used to blackmail them."

It wasn't until a year later that the FBI raided Raniere's New York home and arrested him in Mexico. Prosecutors told the BCC that the women he was staying with in Mexico "chased the car in which the defendant was being transported in their own car at high speed" after the arrest.

On Monday, federal prosecutors sent a letter to the judge overseeing Raniere's case arguing that he "has access to vast resources, [and] poses a significant risk of flight." The letter continued: "In addition, his long-standing history of systematically exploiting women through coercive practices for his own financial and sexual benefit demonstrates that, if released, he would pose a danger to the community." He's currently being held without bail, and could spend a minimum of 15 years in prison if found guilty of sex trafficking.

Brock Wilbur, who spent the last nine months investigating Raniere for a podcast, wrote in a Facebook post that "this isn't finished." Raniere may be locked up, but Wilbur points out that "there's a bunch of people in Nxivm facilities all over the world who think their Brilliant God Leader was just taken by the Evil Empire." He called for some type of support system to be established to help Nxivm members move past the cult-like group.