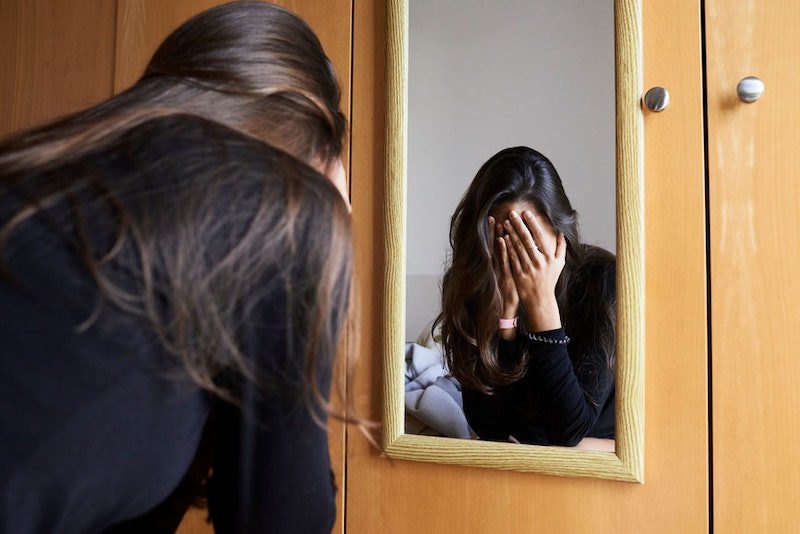 Monday, May 13 marks the start of Mental Health Awareness Week — a seven-day campaign with different themes each year. Body image is the focus of the 2019 week, leading the Mental Health Foundation to commission a large survey on the issue. Just over 4,500 people took part in the poll. The findings have revealed that it's not just young people that are affected by images of "perfection" hawked by advertising and on social media. According to the survey, older ages feel a similar impact. In fact, it found that just over one in eight UK adults have suicidal thoughts about their body image.

One in five respondents said social media had caused them to worry about their body image, reports the Guardian. This statistic rose to almost half in 18- to 24-year-olds. Participants were also asked about specific feelings related to body image. One in three admitted to feeling anxious or depressed. Almost one in five said they had felt "disgusted" about their body image with 20 percent experiencing feelings of "shame".

There was a notable difference between women and men. One in 10 women reported that their body image had caused them to "deliberately hurt themselves." The same experience was relayed by one in 25 men. However, high numbers of men are still affected. A quarter of male respondents said they felt depressed when thinking about their body image.

In a statement, Mark Rowland, chief executive of the Mental Health Foundation, noted: "Women, and particularly young women, are showing the highest rates of distress. Significant numbers have felt feelings of disgust and shame or changed their behaviour to avoid situations that make them reflect negatively about their bodies." But he also stressed that "body image issues can affect anyone and at any stage in life."

The organisation is calling on the government, social media companies, and regulatory bodies to take a stand against potentially damaging imagery. "The majority of respondents felt the government needed to take more action," said Rowland, adding: "This social harm has been allowed to develop largely unchecked. While there have been some positive initiatives, social media companies have frequently been unwilling to take the necessary steps to protect their users from harmful content."

In a separate body image report, the Mental Health Foundation lists out a number of recommendations companies and individuals can take to lessen the impact. Via an independent regulator which has already been proposed, the government can enforce stricter rules on social media platforms. These could include ensuring that diverse body types are represented and that posted content does not result in negative emotions.

It is also asking the Advertising Standards Authority (ASA) to step things up a notch by pre-vetting broadcast adverts from companies advertising things like weight loss and cosmetic surgery. Education could also play an important role, according to the foundation, if body image lessons were compulsory in schools.

The average person can also help both themselves and others. If you feel like social media is impacting the way you feel about your body, be mindful of who you are following. Don't be afraid to hit the unfollow button on any accounts that promote an unhealthy or idealistic way of life.

In everyday conversations, try and speak about all bodies in a positive way to avoid reinforcing damaging stereotypes. And last but not least, complain to the ASA if you see an advert in print, online, or on TV that "presents an unhealthy body image as aspirational."

If you or someone you know is experiencing suicidal thoughts, call the Samaritans on 116 123 or email jo@samaritans.org. You can also call mental health charity Mind on 0300 123 3393.