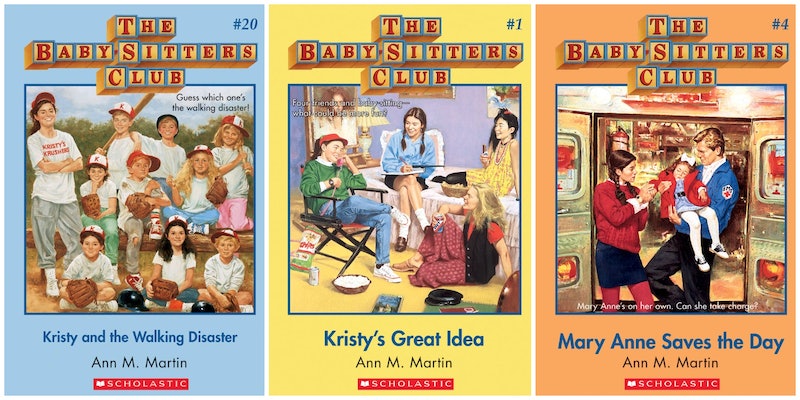 For an untold number of girls who came of age in the '80s and '90s, the initials "B.S.C." bring to mind one, iconic book series: the Baby-sitters Club. Created by Ann M. Martin in 1986, the Baby-Sitters Club books followed a crew of friends through the trials and tribulations of owning a business. But we gained more than just an understanding of independent entrepreneurship. Here are ten feminist lessons I learned from the Baby-sitters Club series.

A group of girls, on the cusp of their teenage years, identified a need in their fictional hometown of Stoneybrook - babysitters! - and created their own business to fill that void. That premise alone - middle-schoolers in charge and killin' it - was in itself a revolutionary concept for many young readers. I personally started dozens of businesses, inspired by the success and the tenacity of Kristy (President!), Claudia (Vice President!), Stacey (Treasurer!) and Mary Anne (Secretary!) and their crew of babysitting professionals. I learned from them the importance of creative problem solving and building your own solutions when no one else's seem to do the trick.

In a 2016 interview in The New Yorker, Martin revealed that while the Baby-sitters Club wasn't written with an explicitly feminist "agenda," she personally identifies as a feminist, and consciously created a group of friends who embodied a host of narratives. Her girls had economic diversity, family diversity and, though this was certainly improved upon later in the series, a certain amount of racial diversity.

Hundreds of BSC books have hit the shelves in the 20+ years since Kristy's Great Idea came out. A 1995 film adaptation solidified the popularity of the BSC for a newer generation (mine!). And the books have continued to succeed to such an extent that they've entered yet another round of printing, complete with a cover redesign and digital presence.