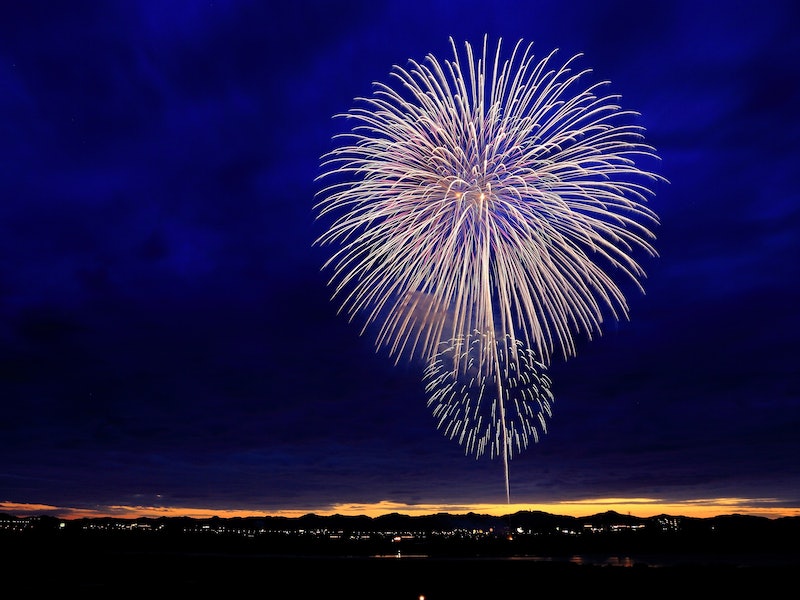 When it comes to the Fourth of July, it's the fireworks that steal the show. Sure, the barbecues are great and it's fun to dress in red, white, and blue, but as these fireworks quotes for the Fourth of July point out, neither can compare with the beauty that these magical explosives have once they begin to fill the sky. Seriously though, whoever invented these beauties has my eternal gratitude, and probably most of America's as well.

Glimmering and bright in color, fireworks manage to make their spectators feel something deep inside. I mean, who can watch an entire fireworks show and not be impressed? They can remind us of the wonder that fills this country, and perhaps most importantly on July Fourth, the freedom that we have to experience it.

While no words can really do the beauty of fireworks justice, these quotes come pretty darn close. In fact, just researching them left me feeling elated and ready for the Fourth. However, while fireworks may be primarily a visual experience, I think the following authors do a pretty good job at making them a literary one as well. If you can't make it out to a fireworks show this year, these quotes will suffice... and maybe a quick three minutes watching Katy Perry's "Fireworks" video. Promise.

1. "The evening of the Third of July we would go around the neighborhood and look at the fireworks others had bought, taking them out of the brown paper sack and handling them cautiously as if they were precious stones." — Paul Engle

2. "We shall go wild with fireworks... and they will plunge into the sky and shatter the darkness." — Natsuki Takaya

3. "My early childhood memories center around this typical American country store and life in a small American town, including Fourth of July celebrations marked by fireworks and patriotic music played from a pavilion bandstand." — Frederick Reines

4. "Don't look to the sky for fireworks when you can watch them light up in the eyes of all the people passing by." — Tyler Kent

5. "July 4th fireworks exhale over the Hudson sadly. It is beautiful that they have to disappear." — Frederick Seidel

6. "The fireworks went on for nearly half an hour, great pulsing strobes, fiery dandelions and starbursts of light brightening both sky and water." — Sol Luckman

7. "What was important wasn't the fireworks, it was that we were together this evening, together in this place, looking up into the sky at the same time." — Banana Yoshimoto

8. "Because beautiful things never last. Not roses nor snow… And not fireworks, either." — Jennifer Donnelly

9. "I always have the most fun on the Fourth of July. You don't have to exchange any gifts. You just go to the beach and watch fireworks. It's always fun." — James Lafferty

10. "I ignite the wick, and the firework takes flight. In that moment, I wish my existence were as simple as being set on fire and exploding in the sky." — Adam Silvera

This article was originally published on July 3, 2016