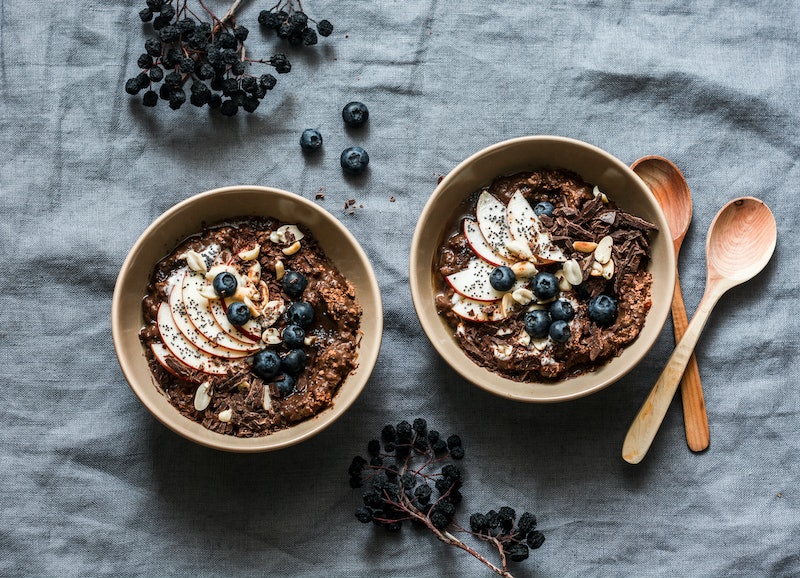 Food is one of the greatest joys in life, but as all of us have experienced at one time or another, eating certain foods can bring discomfort. This is especially true if you're sensitive to certain ingredients, textures or flavors, or have a tendency to eat super quickly. A food-related discomfort that's particularly annoying (and can be painful) is acid reflux, or heartburn, which arises (ahem) when food isn't digested well. Eating foods and drinks that prevent acid reflux can help decrease the chances of heartburn, indigestion, pain, nausea, and increase the chances you get the most out of what you eat.

"Acid reflux occurs when there is a weakening in the sphincter between your esophagus and stomach," Samantha Cochrane, a registered dietitian at The Ohio State University Wexner Medical Center, tells Bustle. "As the sphincter weakens, pressure changes cause the acidic contents of the stomach to come up into the esophagus." Things like hormonal changes, smoking, certain medications, and particular foods can lead to acid reflux, Cochrane says. Working low-acid drinks and food into your diet can help you get ahead of any potential reflux situations.

As a certified health coach, I work with clients on having healthy digestion, and with this, we usually discuss eating slower in order to be more mindful and to ease the digestive process, without overwhelming the body with large amounts of protein, acid, and other substances that your digestive system then has to pass. Such overwhelm can delay the digestive process and cause symptoms of acid reflux, such as heartburn and indigestion, as well as a bad taste in the mouth, trouble breathing, and scratchiness.

While avoiding foods that cause acid reflux isn't always possible — imagine Sunday dinners without spaghetti and meatballs, for instance — it's worth keeping this list in the back of your mind for times you *especially* want to avoid acid reflux.

Here are 10 foods and drinks that can help prevent acid reflux.

In general, the name of the game in terms of eating to avoid acid reflux will be to eat low-acid food and drinks — and that includes fruit. Avoiding citrus or other acidic fruit can help prevent acid reflux, according to the Cleveland Clinic. Bananas and melons, by contrast, are lower in acid, meaning that they are less likely to trigger acid reflux symptoms, according to Dr. Jamie Koufman, who recommended these fruits to The New York Times.

Other great, low-acid snacks? Toss some bananas in your oatmeal. The classic breakfast cereal has a pH of 7.2, says The New York Times, making it a very neutral addition to your day (no pun intended). Oatmeal can go down real easy and keep you full for hours to come. It can also help with other digestive processes, with one 2005 study finding that oatmeal helped babies with acid reflux poop better. The more you know!

Chewing gum can help manage acid reflux in a surprising way; it encourages saliva production, and saliva, which is low in acid, helps soothe your irritated esophagus, according to Harvard Health. Spearmint or peppermint, though, can lead trigger acid reflux, Cochrane says, so it's better to stick to fruit-flavored gum or another more neutral flavor.

Ginger has been used as a folk remedy for acid reflux, GERD, and heartburn for centuries, according to Harvard Health. The science on it's effects on heartburn are so-so: a 2019 review of ginger's effects on digestion found that while ginger had a net positive effect on nausea, one of its few, rare side effects was actually heartburn. Regardless, the study concluded that "ginger could be considered a harmless and possibly effective alternative option" for nausea and other digestive issues, and that more research is needed, so if ginger helps you, more power to you. Eat plain or toss into a veggie dish with a meal. You can also toss some in a juice, water, or smoothie, and take a few sips after eating.

According to Robynne Chutkan, a gastroenterologist in Washington, DC, and author of Gutbliss in interview with Prevention, drinking almond milk can get rid of acid reflux and help prevent it from occurring due to its key nutrients and ability to alkalinize the body and allow it to thrive in a proper state.

"Sometimes cow's milk can contribute to reflux, so almond milk is a great substitution," Beth Warren, MS, RDN, CDN, told Bustle for a previous article on acid reflux. "Almond milk is alkaline — the opposite of acidic — helping to combat acid reflux." Drink plain or add to smoothies after a meal.

Greek yogurt, skyr, or kefir which have strains of healthy gut promoting bacteria and probiotic properties, have been shown to help prevent acid reflux.

"Foods with healthy bacteria [such as yogurt] may help improve digestion and reduce the frequency of acid reflux," nutritionist Lisa Hugh previously told Bustle. Have a yogurt for breakfast or snack. It's also packed with other vital nutrients and protein!

Similar to ginger, licorice is a long-touted herbal remedy for heartburn. A 2014 review of case reports found that deglycyrrhizinated licorice helped children manage acid reflux as a part of a broader integrative treatment. (Deglycyrrhizinated means that a compound linked to high blood pressure has been removed.) You can pick this up in tablet form at your pharmacy.

If you don't like the taste of licorice, you probably won't like the taste of fennel, either, but know that both of these bitterly sweet herbs can help with acid reflux, according to Providence St. Joseph's Health. Fennel has powerful abilities to help soothe the stomach and digestive process and to reduce acid. Consume fennel as part of a salad or after a meal for the best results.

While food that has a higher fat content isn't necessarily "bad" for you — avocados, for example, are chock-full of it — fat can exacerbate acid reflux. "Choosing lean protein sources such as lean meats, fish, beans, legumes, and low-fat dairy can help prevent reflux when substituted for proteins higher in fat," Cochrane says.

You might think of aloe vera as a gel you use to treat sunburn, but the anti-inflammatory effects that make it a soothing post-vacation skin treatment also make the plant effective at managing acid reflux. A randomized control trial published in 2015 found that it was "safe and well tolerated and reduced the frequencies of all the assessed GERD symptoms." You can pick it up as a juice from most supermarkets.

If you notice acid reflux symptoms, it might be a good idea to change up your food choices so that you can feel better and more comfortable after a delicious meal. Cochrane suggests eating slowly, eating smaller, more frequent meals throughout the day, and waiting at least three hours after eating before lying down. But ultimately, if acid reflux is getting in the way of living your life, you should speak to your doctor about ways you can manage it.

"If you notice that any home remedies have to be used more and more frequently to manage symptoms of reflux, it’s time to talk to a doctor about what you can do to better manage those symptoms," Cochrane says. "Uncontrolled reflux can cause damage to the esophagus and increase risk of further health problems over time."

This article was originally published on Oct. 5, 2016