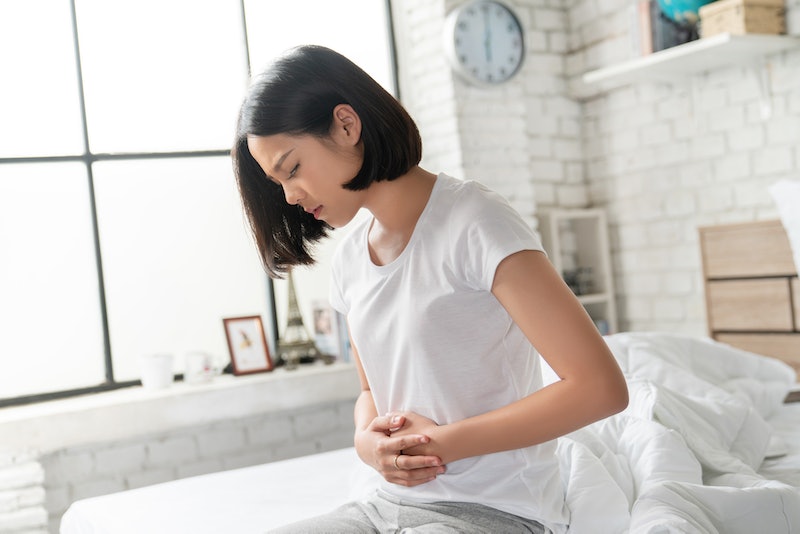 Feeling like you're bloated isn't a great feeling. Not only does it often appear without rhyme or reason, but it also can cause physical discomfort when your clothes feel too tight, or you just feel way too full — like you do after a big meal — to function like a human. Bloating can be caused by a myriad of factors ranging from water retention to simply having eaten a food that produces too much gas in your digestive tract — but whatever its cause, it's not a fun thing to deal with. Luckily, however, there are some ways to counteract the discomfort: For starters, there are some foods that can reduce bloating.

Much of the time, bloating is caused by the processes that occur during digestion and characterized by the accumulation of gas in the intestine. But here's the funny thing: Despite the fact that eating and drinking certain foods can lead to bloating, consuming other foods can actually reduce the feeling, or make it go away entirely.

It won't be an immediate relief sort of situation, but incorporating some or all of these foods into your diet will definitely offer a noticeable difference over time. Here are a few of the foods that can help relieve that gassy, full feeling — or prevent it.

Because water retention can lead to bloating, it might seem counteractive to drink more water. You're already retaining water, wouldn't more just add to it? Wrong: As SF Gate reports, retaining water is the body's way of holding on to fluid so that you do not become dehydrated. So it's especially important when you are bloated to push fluids through your body, not eliminate them. That way, your body is no longer is in fear of dehydration and will let go of the excess water it's storing.

And while you're at it, do yourself one better and add a lemon to that glass of water: lemons, being a natural diuretic and a gentle laxative, can reduce the amount of salt retained in your body. Add lemon juice to warm water for maximum effect.

According to Livestrong, the vitamins that reside in the stalks of this vegetable have been known to decrease fluid retention. That's one of the reasons celery is commonly used as a digestive aid to regulate bowel movements and control intestinal gas. But, keep in mind that when you're bloated, it's best to lean toward cooked veggies over raw, as the fiber structure is broken down when vegetables are cooked, making them more easily digestible. So, cook the celery into a soup, and get eating!

Almost all melons are beneficial to your health in some way, but watermelon is by far the juiciest: it consists of 92 percent water, which, again, is instrumental in reducing that bloated feeling. According to Good Housekeeping, watermelon also has natural diuretic properties, which will help you pass more liquids in a shorter timeframe, thus reducing your bloating quicker.

According to the Penn State Hershey Medical Center, rosemary has been traditionally used to treat all kinds of ailments, including muscle pain, spasms, and alopecia. But did you know that the herb is also used to treat indigestion that can lead to bloating? Consuming a sprig on its own would be a little weird, so steeping some in your next cup of tea or combining it with some celery to make a broth is a good way to get what you need from it.

Taking in too much sodium and not enough potassium and fiber can keep you suffering from bloating on a regular basis, so lowering your sodium intake and amping up your potassium levels can be the fastest way to reduce bloating. Dietary fiber-rich lentils are an excellent choice for aiding your digestion when bloated, and potassium-packed beans, like white beans, soybeans, and lima beans are actually the highest-fiber vegetables you can get. And the gravy on top of those beans? They are naturally high in both estrogen and protein and can assist in relieving period-induced bloating.

Now that all sounds great, but I know you're still thinking, "How can beans truly help me with bloating if they are known to make you gassy?" And you'd be totally right. They do make you gassy. Initially.

You see, if you aren't used to eating beans on a regular basis, they can give you a gassy feeling. But if you slowly work them into your diet, your body will adjust to the compounds that cause the gas. And then you will only see the benefits of the bean.

Certain foods, especially some carbohydrates, are either completely indigestible or can only be partially digested in your stomach. These foods are to blame for gas buildup and therefore contribute to bloating. According to the American College of Gastroenterology, rice and rice flour are a good substitute for starches like like wheat, oats, corn, and potatoes, as rice is fully digested in the small intestines, giving it the least chance of forming gases in your gut.

If you want to try using yogurt to fight bloating, you first need to make sure you know what you're looking for in that yogurt: active cultures. According to Doctor Oz, this is because consuming yogurt that contains active cultures on a regular basis increases your levels of lactobacillus and bifidobacterium — known as “good" bacteria — in your digestive tract. Doing this will keep things moving in your digestive tract, and prevent your belly bloat. Your best bet is plain yogurt, but you can mix a little fruit into it too.

Though we've talked about gas playing a big part in bloating, sodium is also a cause. According to the CDC, because there is so much sodium in processed foods, it is much easier to consume large amounts without knowing it. That sodium dehydrates you, which thus causes your body to retain water. Potassium, however, counters those effects. Keeping an eye on your overall potassium-sodium level is important for water balance in the body. If you suspect today's bloat is a result of last night's salty dinner, add a potassium-rich sliced banana to your diet to bring back the balance.

Inside of this tropical fruit is a substance called papain, which, according to Livestrong, is a proteolytic enzyme that promotes digestion. Now, I know it may not be the most popular fruit or easy to find in your standard grocery store, but the papaya is still worth considering, especially as you can easily pop some slices into a breakfast smoothie.

While bloating can feel uncomfortable, working one of these foods into your diet for a day or two will help alleviate the feeling — and it doesn't hurt that all of the options taste pretty good, too.

More like this
This TikTok Hard Seltzer Hack Involves A Milk Frother
By Alexis Morillo
The 9 Best Easy-To-Use Coffee Makers
By Vanessa Spilios
On TikTok, Orange Wine Is The Varietal Of The Summer
By Madeleine Aggeler
Is The Insta-Famous Always Pan Actually Worth It?
By Jessica Goodman
Get Even More From Bustle — Sign Up For The Newsletter

This article was originally published on June 19, 2014