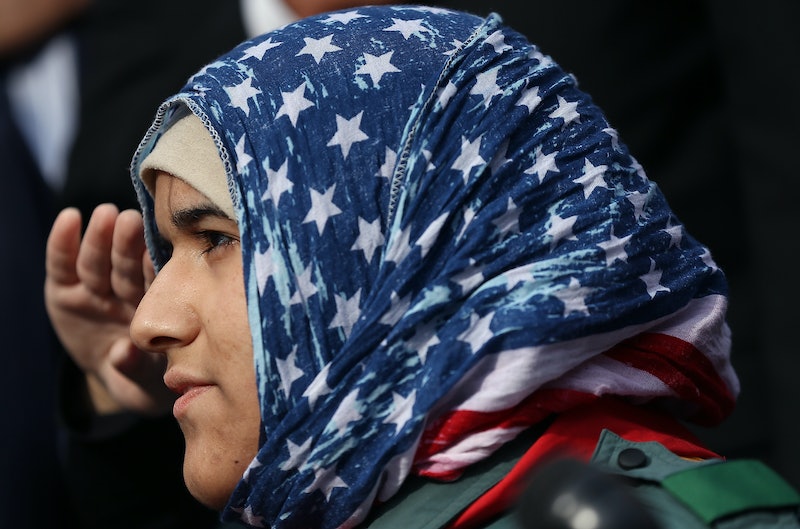 The word "ally" has been around for a long time, but ever since the 2016 presidential campaign, the word has taken on a different meaning and position in American society. For various reasons, individuals from marginalized identities, such as LGTBQ people and religious or racial minorities fear for their safety under the current political administration. Among them are Muslims who feel unsafe in the United States in spite of many of them being born and raised here. Muslim women, especially, feel vulnerable. But there are ways to be an ally to Muslim women in these difficult times.

Here's the thing about being an ally: Solidarity doesn't necessarily have to take the form of starting a campaign or raising funds. Solidarity is often about the small yet meaningful things you do in everyday life while you're hanging out with friends, taking the public transit system, or attending classes. In these contexts, solidarity means being alert and on the lookout for potential incidents of bigotry or discrimination. It means not remaining complacent when you see someone exhibiting hostility to a minority. It means using whatever resources on your person to keep that individual out of harm's way. It's a moral obligation ethical citizens owe each other.

Muslim women are especially susceptible to Islamophobic harrassment or attacks due to frequently wearing physical markers, like head coverings. For instance, right after the London Bridge attacks, Muslim women reported being verbally assaulted in public. Still, there's hope. With simple steps, you can be an ally to Muslim women in the most effective manner.

When there are attacks against Muslim women, sometimes people are stunned into silence. Such a lack of response can be interpreted as acceptance by the attacker. If you see someone behaving violently toward a Muslim woman, don't just stand there and watch.

2. Intervene By Speaking To Muslim Women

In the event of an attack against a Muslim woman, you can help by intervening. In this case, you should speak directly to her and avoid any interaction with the attacker. This thwarts the attacker by simply engaging the woman and completely ignoring the former.

With the pervasiveness of smartphones, it's easy to simply pull out your phone and begin recording an incident of bigotry. This is especially helpful if you are not able to physically intervene or engage with the Muslim woman. By recording the incident, you are being helpful in providing a witness account and delineating the attacker's intention. It's often needed later on to file reports of anti-Muslim hate crimes.

Sometimes a small gesture of kindness goes a long, long way. If you see someone looking overwhelmed or simply bogged down, it doesn't hurt to reach out and ask if they are alright. A simple "How are you?" reminds people they are not alone.

5. Be An Ally Even When Muslim Women Aren't Around

Solidarity is constant work. Even when Muslim women aren't around, you can be an effective ally by dispelling myths and stereotypes surrounding Muslim women. If you hear your friends spreading unsubstantiated rumors about Muslims and Muslim women, you can intervene and educate them.

It's absolutely natural to feel curious about other people and their cultural practices. This curiosity can be seen as a great way to learn about people and their lives. Instead of going through fear-mongering websites that push stereotypical images of Muslim women, you can be a good ally by learning what actual Muslim women have to say about themselves. Knowledge is, after all, power.

Just like the adherents of any other faith, Islam has a rich and diverse base of followers. Due to this diversity, different Muslims face different kinds of Islamophobia. Black Muslim women are often exposed to the dual threats of anti-black racism and Islamophobia. Because of this complex nature, it is important to remember how anti-Muslim animus intersects with other forms of discrimination.

Many Muslim women wear the hijab, and many don't. Different schools of thought, sects, cultural influences, and social practices show that Muslim women are not a monolith. A good ally remembers this, and avoids brushing people off with generalizations.

9. Correct People When They Expect Muslim Women To Apologize For Their Faith

Just like Christians shouldn't have to apologize for extremist deeds committed in the name of Christianity, Muslim women should not be expected to roll apologies out in the name of their faith. It's a dangerous expectation to make of a minority group, and allies can work on that by correcting people who demand such a vocalization.

Perhaps the best thing an ally can do is actively listen to Muslim women and their perspectives. Instead of speaking over them, lending a listening ear is one of the most effective ways to show solidarity with a group of people constantly spoken over.

These strategies aren't the only ones you can adopt to be an ally to Muslim women. But they're surely a good point to start from. With the current political climate where anti-Muslim rhetoric is frequently heard, your alliance can mean the world to someone.