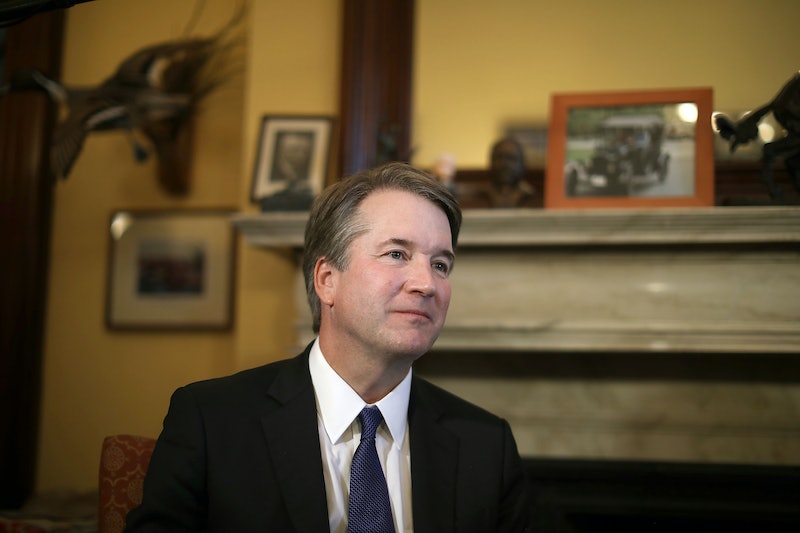 Just days before Brett Kavanaugh's Supreme Court confirmation hearings are slated to begin, the Trump administration is withholding 100,000 pages of Kavanaugh's records on the basis of presidential privilege. According to the Associated Press, administration officials informed the Senate Judiciary Committee of their decision to withhold the documents on Friday. Bustle has reached out to the White House for comment.

The documents, which pertain to Kavanaugh's work in the early 2000s for George W. Bush's administration, have been a key source of tension between Congressional Democrats and Republicans. Republicans are eager to confirm Kavanaugh to the Supreme Court before the court starts its new term in October. Democrats, however, are concerned that the confirmation hearings will be premature, given that the Senate Judiciary Committee won't be able to access a significant portion of Kavanaugh's records.

BuzzFeed reported that a total of 27,100 documents, or 101,921 pages, will not be provided to senators prior to Kavanaugh's confirmation hearing. In a letter sent to Senate Judiciary Committee Chairman Chuck Grassley on Friday, William Burck — an attorney for Bush who has been leading a review of the documents — informed the committee's senators that many of the documents being withheld "reflect functions within the Executive Office of the President the confidentiality of which has traditionally been considered at the core of a President’s constitutional privileges."

In the letter, Burck explained that he had given the committee "every reviewable" document that he received, excluding those that were "protected by constitutional privilege," and said of the excluded documents that "the White House, after consultation with the Department of Justice, has directed that we not provide these documents for this reason."

Burck also wrote that the Presidential Records Act gives the Trump administration the authority to withhold documents, citing the confidentiality of these documents as "critical to any President’s ability to carry out this core constitutional executive function."

The Trump administration's decision to withhold so many documents has already prompted backlash from Democrats like Senate Minority Leader Chuck Schumer. Schumer took to Twitter on Saturday to condemn the decision as a "Friday night document massacre."

"President Trump’s decision to step in at the last moment and hide 100k pages of Judge Kavanaugh’s records from the American public is not only unprecedented in the history of SCOTUS noms, it has all the makings of a cover up," Schumer tweeted. "Republicans in the Senate and the President of the United States are colluding to keep Judge Kavanaugh’s records secret, and trying to hide their actions from the American people by doing it on the Friday night of a holiday weekend. What are they trying so desperately to hide?"

Kavanaugh's confirmation hearings are scheduled to begin on Sept. 4, and Grassley has previously said that he expects the hearings to last no longer than four days.