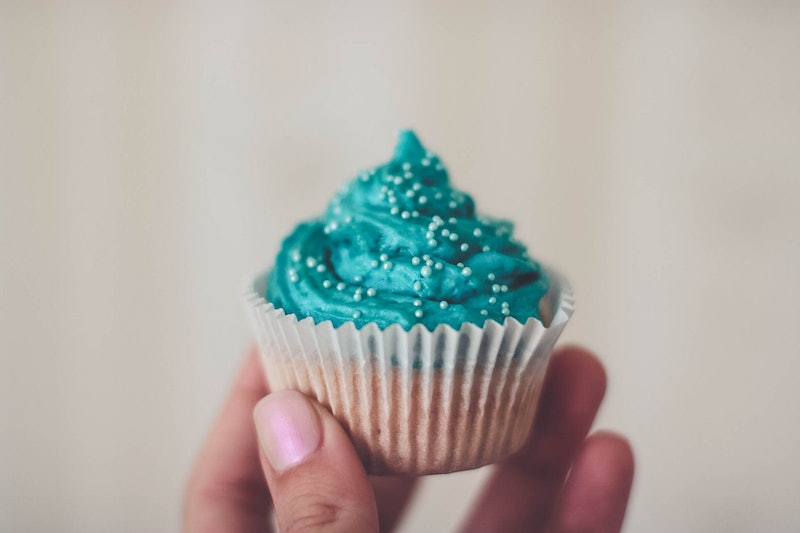 Those 3 p.m. munchies at the office might happen every now and then, but if you're getting some serious sugar cravings regularly, it could mean that something's off in your body. Luckily, there are a few ways to cut sugar cravings based on Eastern medicine, or Traditional Chinese Medicine (TCM) principles. Plus, this type of thinking can promote a healthier lifestyle overall, so you won't just squash sugar cravings, but you'll also feel more in control of your lifestyle, sleep, and other aspects that make a big difference in your day.

As a certified health coach, I work with clients on feeling healthy and balanced, where they are eating and craving foods that are uplifting, energizing, and just plain good for them. It's also worth noting that sugar has addictive qualities, meaning the more you eat it, the more you'll crave it. So, if you're eating more and more, it can become a nasty cycle.

"Sugar cravings in traditional Chinese medicine come from weak digestion of what we call the spleen," Dr. Elizabeth Trattner tells Bustle. "In TCM the spleen likes to be warm and dry and sugar makes it cold and damp." This can throw off proper digestion, making you feel not-so-great after downing that sugar, too. By following these Eastern medicine principles, though, you can break free of the pattern and feel healthier overall.

Ginger is the hottest and one of the best herbs for digestion, which also helps with cravings, says Trattner. "I like ginger with Turmeric, lemon, and either room temperature water or warm water (stay away from cold). Ginger also is a strong antioxidant, is antimicrobial, which kills bacteria, and contains anti-inflammatory agents, which help eliminate congestion," says Trattner.

"My other trick is to eat yellow or orange root vegetables that build digestion according to Chinese dietary therapy. This can be sweet potatoes, squash, and pumpkin," says Trattner. Eating these as a snack first instead of binging on sugar will help squash those cravings, as these root veggies are naturally sweet, as well.

Foods that are high in fiber can help balance blood sugar, says Trattner. This means bran, green and cruciferous vegetables, fruits that are high in pectin like apples or pears, and ancient grains, which have fiber and complex carbs, are all great options. Try and eat fibrous foods throughout the day for better digestion and to stay fuller longer.

"You should also take note of the amount of animal proteins that you consume, if you eat them on a regular basis. Old Eastern medicine claims that meat and sugar have a similar effect on our body. When we eat too much meat, we push our body into a ‘contracted state’ which then forces our body to crave the opposite, which is expansion (think obesity, diabetes, cholesterol etc.)," Caleb Backe for Maple Holistics tells Bustle. "So by cutting down on the meat as well as the sugar, you allow your body to balance itself out more naturally."

Apparently drinking mineral water can help, too. "It’s important for you to ensure that you drink a lot of fresh mineral water to help you flush out any toxins from your system and keep you feeling light. This will help to increase the amount of energy your body has in store as well," says Backe.

6. Cut Back On Caffeine

In Eastern medicine, soda and caffeinated, sugary beverages are a no-go. "It’s important to cut down on caffeine, caffeinated products, soda’s, fruit juice blends with added sugars and all the other sweet drinks we enjoy so much," says Backe. These types tend to contain the highest amounts of sugar and should be avoided, in favor of say herbal teas and more digestive-promoting elixirs.

Here's more reason to add cinnamon to coffee or morning oatmeal. It can improve blood sugar and slash sugar cravings. "Cinnamon in western medicine has demonstrated efficacy with stabilizing blood sugar. In Chinese medicine cinnamon, or Gui Zhi/Rou Gui, warms the center of the body and moves energy," says Trattner. Plus, it tastes great.

8. Eat An Apple For A Snack

"Apples contain pectin and western medicine studies have demonstrated that pectin helps coat the lining of the stomach," says Trattner. "In Chinese Medicine, apples are naturally sweet, but eat them in the form of cooked, like baked apples or applesauce." This improves digestion and doesn't make the spleen damp, says Trattner.

9. Use Orange Peel In Tea

"Orange peel or bitter orange peel (chen pi , zhi shi, or ju pi) can be made into a tea and helps drain dampness," says Trattner. And, the pectin found in orange peels will also eliminate this dampness.

"I make a compote with ginger, cinnamon, orange peels, and apples. This compote is building and helps my sweet cravings. I do not get bloated either, but feel good, full and don’t want to rip through the pantry looking for junk. Baked apples can be made this way as well," says Trattner.

"According to Eastern medicine, foods like cold vegetables, fried foods and dairy are hard on the spleen — just like sugar. Avoid these foods to give your spleen a bit of a break," says Maggie Rouen, a dietician in NYC, tells Bustle. Instead, stick with warming foods, like soups and stews, and look for healthier cooking methods, like baking, roasting, or grilling, instead.

Eastern culture is all about savoring food and eating mindfully, whereas in Western culture people just devour their food in a matter of seconds. "Focus on the tastes and textures of the foods your eating. Put your fork down between bites. Enjoy eating while focusing on just your meal," says Rouen. "Reduce the distractions surrounding your meal so that you can be truly mindful about what you're eating, how it's making you feel and when you're beginning to feel the sensations of fullness."

If you're looking to ditch those sugar cravings and feel more balanced, these Eastern medicine tips might be just what you need. Looking into a different culture's positive habits gives a new perspective to spark change.

More like this
Young People Are Still Experiencing Period Poverty In UK Schools
By Sophie McEvoy
I Tried The $20 TikTok Viral Oishii Strawberries — Here's What I Thought
By Sophie Hanson
Trust Me, Pickle Martinis Are The New It Drink Of The Season
By Emma Carey
On TikTok, A ‘Snackle Box’ Is The Best Way To Pack Charcuterie On-The-Go
By Meguire Hennes
Get Even More From Bustle — Sign Up For The Newsletter