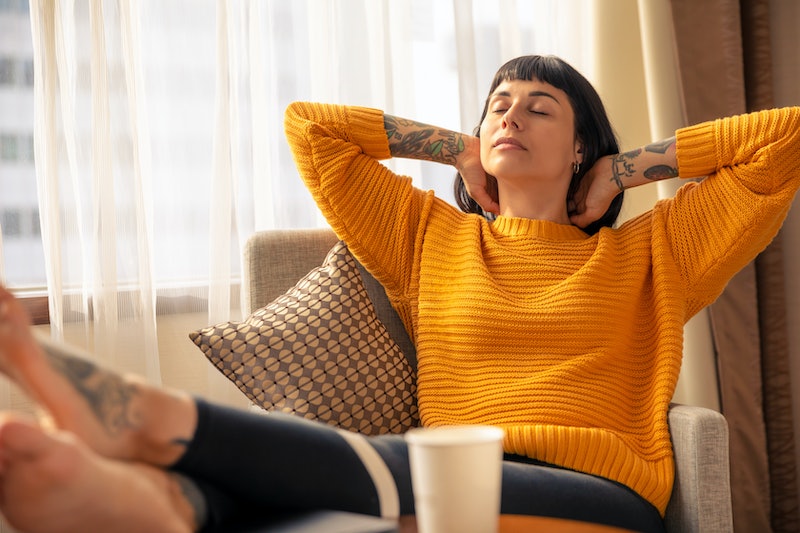 You might have the occasional slip up and misplace your keys. While trekking downstairs to grab a set and prying open your door might be a hassle, it's pretty trivial. However, signs of early dementia are on a totally different scale, and it's best to seek advice from a physician if you find your mental awareness to be less sharp than usual. "Dementia is actually a blanket term for a group of diseases that affect the brain. People with dementia may have problems with daily activities, lose their ability to problem solve or have difficulty controlling their emotions," advises Dr. Matt Kuchan, PHD of Abbott over email with Bustle.

As a certified health coach, I work with clients on keeping their brains active and mind ready. While it's one thing to feel sluggish and mentally drained on a given day at work (especially if you're under stress or didn't sleep well the night before), it's quite another issue to find that you're missing deadlines, forgetting to do tasks, and are unable to concentrate on a regular basis. These signs can signify a mental condition, such as dementia, where your brain isn't working as effectively as it should. Here are 11 symptoms of early dementia that can affect anyone.

According to Maggie Moon, MS, RDN, author of The MIND Diet, over email with Bustle, "emerging research from the Religious Orders Study (a large Alzheimer’s disease study) found that participants with mild cognitive impairment also had more trouble moving their legs and feet. This mild cognitive impairment, plus lots of trouble moving their legs and feet, was associated with them being more than twice as likely to develop Alzheimer’s disease." Moon adds, "researchers think it’s a sign of damage to the part of the brain in charge of motor function."

Moon also explains that a poor sense of smell can indicate early onset of dementia. "In a different early study, researchers found an interesting link between not being able to smell and cognitive problems or dementia," says Moon. Try smelling foods and scents with a powerful odor, and if you can't grasp anything, consider seeing a doctor.

3. Forgetting How To Do Routinely Activities

"Occasionally forgetting things is not out of the ordinary. It’s when it becomes unusual and disruptive to daily life that red flags should go up," says Moon, as well as experts at Healthline, regarding a loss in ability to do mundane tasks. Moon lists the following as an example: "You forget how to do everyday things you’re used to knowing how to do, such as make dinner, hang a painting, or putting away laundry."

4. Getting Lost In Speech

Moon says that if you "ask for the same information" or "ask the same question multiple times," it might show that you're not retaining information properly. Likewise, if you "repeat the same story verbatim multiple times," it might also signify a sense of disassociation in speech and cognition. Furthermore, Dr. Brendan Kelley, a neurologist at The Ohio State University Wexner Medical Center who specializes in treating patient with memory problems, dementia, and Alzheimer’s, adds that "memory complaints may manifest as repeating questions or forgetting details from conversations," over email with Bustle.

Forgetting where you put your keys, and they're on the kitchen table, seems normal at times. However, if you put objects in random, nonsensical place, it could be a sign of a greater problem. If "you misplace things around the house especially in odd places such as putting your cell phone in the freezer or your car keys in the bathroom cabinet," it might be a sign of early dementia, advises Moon.

If you have sharp, inconsistent changes in mood, it could be a warning sign of early dementia, advises Moon, as well as did experts at WebMD. You might experience a "strong uncharacteristic change in mood or personality, such as being suddenly very confused or very suspicious, depressed or fearful," explains Moon.

7. Not Knowing Where You Are

If you find yourself getting "lost in routine places you’ve been before," "lose track of the seasons and passage of time," or find yourself "being in a place and not realizing how you got there," says Moon, it could show a cognitive decline and disassociation related to early dementia.

"Many times a spouse will report subjective observations such as, they have lost their 'zest' for things, or that the spouse is more commonly depending on them to make decisions they would have previously made on their own," says Kelley. "Depression symptoms have been described as occurring in the months prior to onset of dementia," adds Kelley.

While there are often problems with remembering conversation points and questions, there's also a tendency to lose the ability to create words effectively, advised experts at Alzheimer's Association. "Many people developing early Alzheimer's disease report increased difficulties with finding words. Language symptoms in prodromal Alzheimer's disease are more widespread and may interfere with their ability to communicate," says Kelley. "The differentiating factor is that people who have dementia experience severe problems with two or more brain functions, such as memory and language retention," advises Kuchan.

"Broadly speaking, neuropsychiatric symptoms such as depression, anxiety, sleep disturbance, irritability, or agitation are associated with a higher risk of subsequent cognitive decline and dementia," advises Kelley. If you notice yourself feeling more agitated than usual, it's worth speaking to a doctor.

If you find yourself feeling too anxious to get a good night's rest, those lost hours will catch up to you, and your brain, advises Dr. Stephen Graef, Sport Psychologist, The Ohio State University Wexner Medical Center over email with Bustle. Graef says "That's the mind play land where it integrates information from the day into your memory and restores the body," regarding time spent sleeping.

If you notice any of these symptoms, it's helpful to make a lifestyle change. Kuchan recommends eating well to boost brain power, and he recommends getting in lutein (found in leafy greens), DHA (found in fish oil), quercetin (found in apples and onions), and vitamin E (found in nuts, seeds, and seafood).

More like this
Ashamed Of Your Screen Time Stats? Here's How To Change That
By Alexis Morillo
The 3 Most Organized Zodiac Signs, According To An Astrologer
By Kristine Fellizar
An Expert Weighs In On The Viral Raw Carrot Salad Trend
By Alexis Morillo
These 3 Signs Are The Master Chefs Of The Zodiac
By Kristine Fellizar
Get Even More From Bustle — Sign Up For The Newsletter
From hair trends to relationship advice, our daily newsletter has everything you need to sound like a person who’s on TikTok, even if you aren’t.