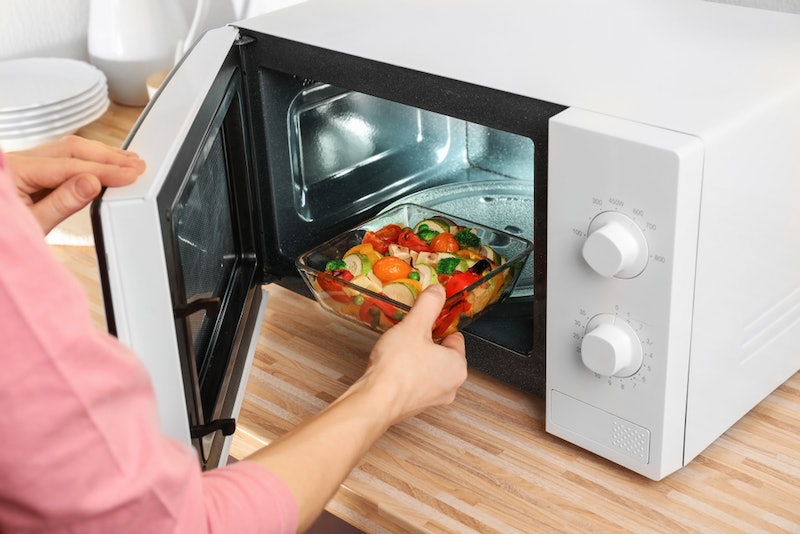 It's great to have food left when you go out to eat or when you cook at home, and most of us just stick it in the microwave without much thought. There are a number of foods that you should never reheat in the microwave, as they could actually end up making you sick. Even if you've managed to be fine thus far, it's helpful to know for the future so you don't end up struggling over the toilet.

“Eating leftovers can be a healthy and cost effective way to make the most of your food,” says Brigitte Zeitlin, RD over email. “But there are some foods that can be dangerous to reheat, especially if they weren’t stored properly (in an airtight container and at the right temperatures) beforehand.”

For many of these foods, it's not just the microwave that poses problems, but the changes in temperature that happens when you leave them out and then consequently reheat it. Either way, you're better safe than sorry. Next time you want to eat what's left in your fridge, you might want to be careful and avoid reheating these 11 foods in the microwave, as they could be harmful to your health or your microwave.

“Potatoes can lead to food poising when being reheated if they were initially left to cool at room temperature after being cooked the first time,” says Zeitlin. “By letting them cool at room temperature, a bacteria called botulism can grow, so it is best to refrigerate your potatoes directly after cooking them if you do not intend on consuming immediately.” However, reheating them after they have been cooled in the refrigerator will help to avoid those issues.

It's OK to reheat chicken once if it has been cold, but be wary of putting it in the microwave, unless you're certain it can cook evenly all the way through. “The inside should be piping hot,” says Zeitlin. Microwaves can sometimes cook food unevenly, which means there could still be bacteria remaining on the chicken if it's not thoroughly cooked. This is also true for microwaving most meats like pork or beef.

If your rice is left standing at room temperature, it can contain spores of bacteria that can multiply and cause food poisoning, according to the National Health Service (NHS). Microwaving it won't kill the bacteria, so you're best eating your bowl of rice in one sitting. However, like most foods, if you refrigerate your rice immediately after cooking it, it'll be safer to reheat later.

“Mushrooms are another vegetable not to reheat” says Zeitlin. “Mushrooms can cause stomach upset when reheated do to the micronutrients in them, so again, it is best to finish your mushrooms the first time around.” Like other produce, bacteria can grow on mushrooms if they're left out at room temperature. After you've sautéed your shrooms, make sure to stick them in the fridge so it'll be safer if you need to reheat them later.

All oils can withstand varying levels of heat, but if that level is exceeded, it produces toxic fumes and hazardous substances called free radicals that can cause issues such as cancer, according to Livestrong. Additionally, oils lack the polarity of water making oil hard or dangerous to microwave. It's best to avoid reheating oily foods in the microwave, as they could get too hot and burn.

If you have a baby, avoid reheating any breast milk in the microwave, as studies have shown that microwaves heat baby's milk and food unevenly. This may result in “hot spots” that can burn your baby's mouth and throat, according to the FDA. “Err on the safe side and heat any 'milk' you are feeding your infant in a hot water bath on the stove,” says Susie Garcia, RDN over email.

If you were hoping that microwaving grapes could somehow produce raisins, you’ll end up with something significantly less edible. In 2014, Australian physicist Stephen Bosi showed how you could produce plasma from a microwaved grape. However, this could ruin your microwave. When you run your microwave while empty or almost empty, the unabsorbed radiation could cause damage.

If you’ve heard urban legends about “exploding” water in the microwave, there is a hint of truth (albeit exaggerated) to the tale. As Samsung states on its product FAQs, water can “superheat” in the microwave. If you microwave water in a smooth vessel, like a glass, it doesn’t give the bubbles created from the water molecule friction a place to form. So, the water could heat past the point of boiling, also known as superheating. To safely heat up a cup of water in the microwave, add a wooden skewer or bamboo chopstick in the water, so it gives the bubbles a place to adhere to.

Seafood food safety is a bit more finicky than other foods. According to the FDA, if your hot seafood is left out at room temperature for more than two hours, harmful bacteria can form and cause food poisoning. If you choose to microwave your leftover seafood, you’ll want to make sure it reheats thoroughly and hasn’t been sitting out for too long to avoid contamination.

While the peppers themselves will stay intact, microwaving hot peppers can release capsaicin, the active component that makes peppers spicy. When you open your microwave door, this released capsaicin could cause your eyes, nose, and throat to burn. If you’ve ever used hot water to wash a plate that has hot sauce, you know that familiar feeling of the spicy vapors stinging your nose.

If you’ve ever tried to make kale chips in the microwave, you might have noticed it start to spark or make your microwave shut down entirely. This sparking, as the USDA explains, is called “arcing.” This usually happens when you put metal in the microwave. However, with vegetables like kale and carrots, the minerals in the soil in which they were grown may cause a slight spark. So long as you catch it quickly, arcing won’t damage your microwave or render your food completely inedible.

In general, when heating or reheating foods, make sure they cook at high temperatures, and don't eat any leftovers older than three days to help make sure the food is still safe to eat and no bacteria or mold has grown on them.