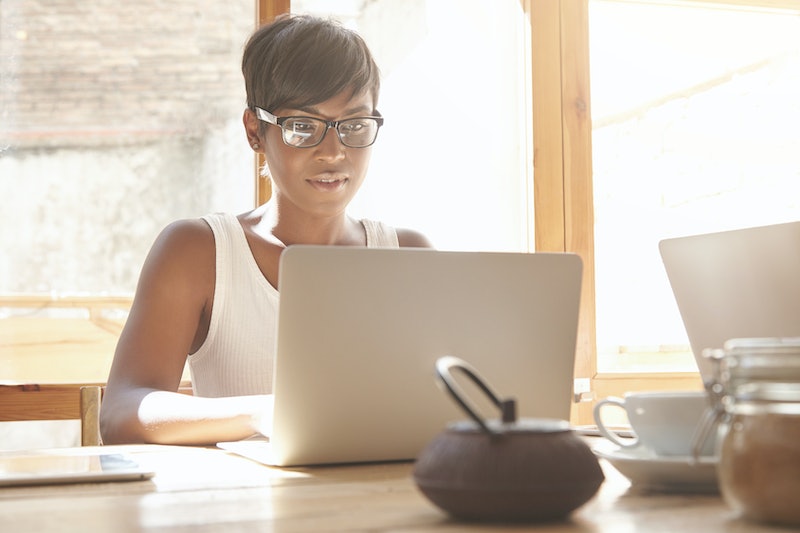 It's officially the start of 2018, which means if you're anything like me, you're itching to start making those little life improvements that you've been putting off for who knows how long now. It's a new year, so no better time to start practicing some new habits, right? These "life improvements" can really be anything really, from figuring out how to stay better organized to learning how to say no to things you don't want to do more often — the bottom line is, they have to make you happier in the long run. If one of your goals for 2018 was to get more organized, you're in luck: there are tons of little life upgrades that will instantly make you more productive, and also so much happier in general.

If you're unsure about where or how to start, the first thing you need to do is really evaluate how it is you normally spend your time. "Your time is valuable. It’s a limited, finite resource that, once used, can never be reclaimed," Lifehack.org wrote in an article about increasing productivity. "By getting a full understanding of how your time is spent and spending the time to ensure you understand your priorities, you will be able to stop wasting time and live a more meaningful, full life."

Whatever your goals may be for 2018, if you're looking for a little life inspo, you've come to the right place. From investing in a bullet journal to surrounding yourself with nature and spending more time outside, here are a few life upgrades you can make that will instantly make you more productive.

Get A Bullet Journal

Bullet journals are having a major moment right now, and for good reason — they're like lists, but better. If you haven't heard of them, there's no need to sweat bullets at the idea of starting one: These nifty little notebooks are equal parts list, organizer, and journal. The idea behind them is to help you become productive in your daily tasks, as well as set goals for the future and track your progress while you move through the year. You can read more about bullet journals here, including how to make one yourself.

This is a super simple goal to make, but it's often easier said than done. Nonetheless, saying no when someone asks if you want to go out, or work on a new project can feel awkward at times, but the benefit is unparalleled: When you say no to things you don't want to do, you're prioritizing and valuing your time above all else, and making a move to spend it how you want to. Don't want to go out on Saturday night, for instance? Don't. You'll be much happier in the long run. According to Lifehack.org, "helping others is a great thing, but stop pleasing people at the expense of your own productive time. Ensure that your lists and tasks get done before helping others. By focusing on staying productive in the tasks that you do, you will find you will have much more time to help others without cutting into your productivity."

According to an article in Reader's Digest, "researchers say that when you skip out on the recommended seven to nine hours of sleep, exhaustion can create a wide array of negative impacts on the brain, including depression, anxiety, and other mood disorders." The article continued to report that research has shown that sleep is "essential for helping people solve complex problems, too. Simply put, setting back your bedtime by just one hour could give you a competitive advantage and make you more successful at your job." So, more sleep equals more productivity — and you'll feel way less exhausted throughout the day, which is always good.

Don't Consume Caffeine Too Close To Your Bedtime

Like many people, I legit can't function without at least one cup of coffee in the morning. Of course, this is fine — I would never recommend someone not drink coffee or consume caffeine if that's something they want to do. Do you, everyone! Be happy! That said, one step toward increasing productivity and getting more sleep (which will, in turn, increase productivity because you'll be way less tired throughout the day) is just making sure you're not consuming too much caffeine close to your bedtime. And by close, I mean eight hours: While coffee consumption is shown to improve memory and cognitive function, according to SleepFoundation.org, "the effects of caffeine last for several hours so consuming coffee even within eight hours of bedtime can interfere with your ability to sleep that night." We already know that less sleep can lead to decreased productivity, so maybe instead of quitting cold turkey, you set a rule for yourself — no caffeine after 3 p.m., maybe?

Don't Look At Your Phone When You're Trying To Sleep

Speaking of better sleep, one small change you can easily make is to stop scrolling through your phone when you're trying to sleep. According to author and nutrition expert, DavidWolfe.com, "light regulates the body’s sleep-wake cycle, referred to as the circadian rhythm. The blue light from cell phone screens confuses the brain into thinking its daytime, even if you’re staring at your phone at two in the morning. The brain responds to the light by secreting hormones that make you feel more awake, so staring at your phone late at night is one of the worst things you can do for your sleep cycle."

Get Rid Of Clutter

According to the website Lifehack.org, "excessive clutter is often a symptom and a cause of stress and can affect every facet of your life, from the time it takes you to do things to your finances and your overall enjoyment of life. Clutter can distract you, weigh you down, and in general it invites chaos into your life." Nobody wants chaos. So one easy thing you can do to eliminate this stress is to simply declutter. Whether that means donating some of your old clothes or getting rid of things that you don't use or need, less is more — and this one simple life hack could make the world of difference in your day to day life.

According to an article by Fast Company that studied the habits of highly productive people, those with a consistent morning routine found it easier to maintain some sense of productivity throughout the day. "Consistency and routine are helpful for starting the day in a proactive mode. While the tasks vary, productive people have found a set of activities and order that works for them."

Surround Yourself With Plants

According to an article on Wired.com, little changes as simple as surrounding yourself with plants have been proven to increase productivity by up to 15 percent. "Its worth investing in them because they add more to an office than a decorative touch," the article said. Like, life. I'm already feeling more upbeat just thinking about plants.

Get Outside As Often As You Can

According to BusinessInsider.com, "nature offers one of the most reliable boosts to your mental and physical well-being," both of which lead to more productivity. Whether it's a walk in the park, taking your exercise outdoors (weather permitting), or taking your lunch break outside, you'll find your productivity levels will likely increase with a higher dose of natural Vitamin D.

No, I'm not talking about the Nike slogan. I'm talking about just doing whatever you've been procrastinating on, or just saving for later. Of course we've all been guilty of procrastinating, but by making yourself stop procrastinating and just do what you need to do, you can save a lot of time and heartache. According to an article by Harvard Business Review: "We can look and feel busy, while artfully avoiding the tasks that really matter. And when we look at those rolling, long-untouched items at the bottom of our to-do list, we can’t help but feel a little disappointed in ourselves." The solution? "The reward for doing a pestering task needs to feel larger than the immediate pain of tackling it." In other words stop dwelling on it and just do it!

According to an article by Slate, "more than half of Americans spend at least 40 minutes in their round-trip commute; the national average is 50 minutes." That's a lot of time spent traveling to and from work each week — not to mention an incredible amount of time spent each year. While nobody loves to commute, one easy way to make this time feel a little less cumbersome is to spend it getting organized. "Public-transit commuters who can read documents the old-fashioned way should do themselves a favor and download Mendeley or Papers. Both organize your papers and make them searchable by author, year, journal, or topic. They also allow you to create tags and collections of papers, so you can find them more easily later, and sync with desktop apps," Slate wrote.

More like this
Black Women's Equal Pay Day Highlights An Upsetting Problem
By Brandi Neal
This Psychological Effect Might Be Keeping You From Hitting Your Goals
By Lexi Inks
The 53 Cheapest, Most Clever Home Upgrades On Amazon
By Laura Harper
Constance Wu On Self-Doubt, Family Drama, & Her Sister's Unwavering Support
By Constance Wu
Get Even More From Bustle — Sign Up For The Newsletter