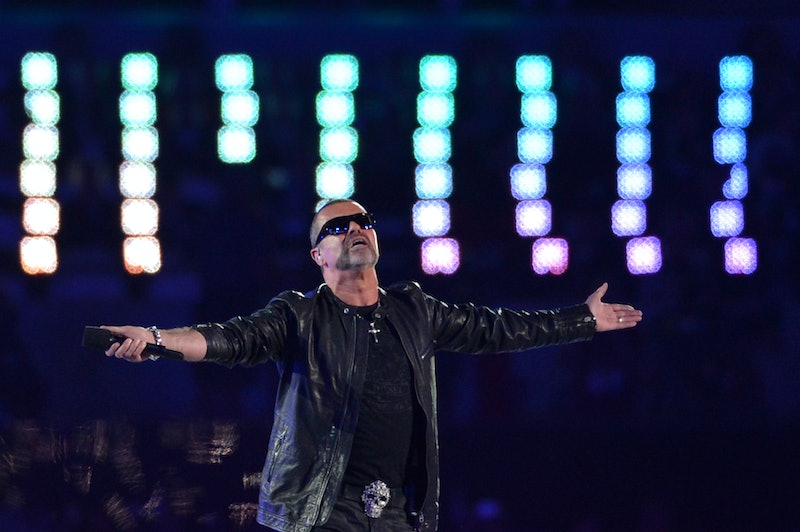 As you may have heard by now, legendary singer George Michael died on Christmas Day at age 53. His publicist and longtime manager confirmed his passing due to heart failure on Dec. 25, according to The Hollywood Reporter. There is no doubt how devastating this loss is, since the British artist was an influential figure in pop culture through the years in the music industry and even in movie scenes with George Michael songs.

His publicist Connie Filippello issued the following statement to USA Today: "It is with great sadness that we can confirm our beloved son, brother and friend George passed away peacefully at home over the Christmas period. The family would ask that their privacy be respected at this difficult and emotional time. There will be no further comment at this stage."

The British singer became a music superstar in the '80s thanks to pop duo Wham!, which he was apart of with childhood friend Andrew Ridgeley. With Wham!, Michael made hits like "Wake Me Up Before You Go-Go," "Everything She Wants," "Last Christmas," and even "Careless Whisper," which was co-written with Ridgeley. Michael embarked on a wildly successful solo career with his 1987 album Faith, which boasted enduring hit songs such as the title track, "Monkey," "One More Try," "Father Figure," and "I Want Your Sex." His other famous tracks include "Freedom '90" and the dance tune "Fastlove" from 1996.

And while Michael's popularity may have mostly been in the '80s and '90s, his influence has endured in pop culture since — especially in movies. Here are some film scenes that would mean nothing without George Michael's music.

More like this
Rita Ora Celebrates Finding Her "Fairytale" Ending With Taika Waititi
By Sophie McEvoy and Catharina Cheung
Is Dua Lipa Dating Trevor Noah? New Photos Show Them Kissing & Hugging
By Brian Anthony Hernandez and Martha Sorren
Everything To Know About Taylor Swift’s 10th Studio Album, 'Midnights'
By Grace Wehniainen and Jake Viswanath
Wallows Want Their Own Epic “Lizzo Flute Moment”
By Jake Viswanath
Get Even More From Bustle — Sign Up For The Newsletter