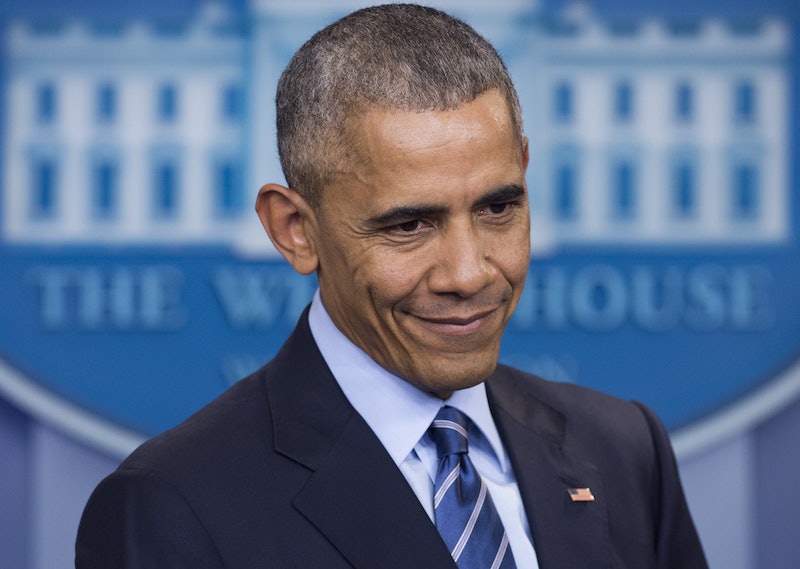 The presidency of Barack Obama is nearly at an end, with less than three weeks remaining until the inauguration of Donald Trump. It's a dark reality that'll surely be gloomy for Democrats, progressives, and really, anyone who's opposed to Trump's policies, personal offenses, and his likely style of governance. To say nothing of the people who'll simply miss President Obama's policy instincts, cool-headed temperament, charisma, and of course, his soaring rhetoric. And in that spirit, why not take a look back? Here are 11 of Obama's greatest speeches over the last eight years, because his is an oratory style you're not going to see in the White House for a while.

Make no mistake: there's certainly no shortage of great Obama speeches through the years, both as a candidate and as commander-in-chief. And if you're looking for a sharp contrast with the current President-elect, it really couldn't be any starker.

Here are 11 of the very best addresses he's given throughout that time. If you're an ardent Obama supporter, why not give them a second look? After all, it's never too early to start remembering his best moments as POTUS:

During the 2008 election, beset by controversy following the revelation of deeply inflammatory remarks by his longtime pastor Jeremiah Wright, Obama delivered what's still remembered as one of his most direct speeches on race and its place in American history.

The 2008 DNC was notable, and not just for Obama's acceptance and his rousing address ― First Lady Michelle Obama got her big introduction to a national audience, too. But he was undeniably the history-laden headliner, becoming the first African American to ever be nominated for president by a major party. And, of course, you know how that story ends.

No look back at Obama's rhetorical history is complete without noting his moment of ultimate triumph, a high that even his reelection in 2012 didn't quite rival ― when he spoke before a roaring throng at Grant Park in his hometown of Chicago, appearing in public as president-elect for the very first time. This was the moment when America first knew Obama would be at the helm.

In 2011, in the aftermath of the attempted murder of Arizona representative Gabby Giffords that gravely wounded her and killed six others, Obama headed to Tucson to speak at the memorial. This was the first of Obama's truly major, high-profile speeches that intersected with that crackling third-rail of American gun politics. And although he's far more explicit about the need for reforms to the country's gun laws in future addresses ― in the aftermath of the Sandy Hook shooting in particular ― this nonetheless stands out as a heartbreaking yet essential moment of Obama's first term.

It's no surprise that moments of profound grief tend to draw out brilliant and moving speeches from Obama ― the American presidency does demand that people be both technical and analytical about political realities, while also marshaling passion, emotion, and sometimes, a sense of soothing comfort and reflection when things go bad. Such was the case in the aftermath of the horrifying Sandy Hook Elementary School shooting in late 2012, which left 20 children and six adults dead.

In 2012, on the night of his reelection, Obama returned to his hometown of Chicago, Illinois to give the second presidential victory speech of his career, and it was a celebratory affair, to say the least. It's also notable for the different tone he struck. After all, being a freshly minted young president-elect is altogether different from being, in effect, the establishment, and Obama's victories under both circumstances speak to a broad level of political skill.

7. The Eulogy In Charleston

Perhaps the most emotional and evocative speech of Obama's political life, his eulogy for pastor and state senator Clementa Pinckney of Charleston, South Carolina ― which ultimately became a eulogy for the eight parishoners who were killed alongside him, as well, gunned down in a racially motivated massacre ― looms large.

In January of 2016, Obama gave an expansive and strikingly emotional speech about the spate of gun violence incidents and mass shootings that have occurred throughout his two terms in office, including the Charleston massacre, the terrorist-inspired killings in San Bernardino, the Sandy Hook Elementary School shooting, and the other approximately 30,000 Americans per year who are killed by guns.

On the 50th anniversary of the civil rights movement's march at Selma, Alabama, Obama himself walked across the Edmund Pettus bridge ― the site of the infamously violent crackdown by the city's racist law enforcement ― and reflected on the history of the civil rights struggle, including his own place in its history as the first black president of the United States. He also spoke admiringly of civil rights hero and icon John Lewis, the Georgia representative who braved vicious assault to walk across the bridge all those decades ago.

Back in July, Obama delivered his final DNC address ― at least, as a public official ― and it had a crackling energy to it. Make no mistake, he really wanted to help propel Hillary Clinton across the finish line and into the White House, as his reflective and impassioned speech demonstrated clearly. That things didn't happen that way likely make this a sad one for Democrats and Obama supporters, but that doesn't mean it should be lost in the sands of time. To the contrary, his last, biggest address to a national audience stands out as a quintessential Obama moment.

Ok, so this is slightly cheating, but it bears extra reminder for anyone who's feeling distraught at the impending end of the Obama era ― he's got one more chance to add a high-profile speech to this list, and it's coming on Jan. 10, 2017, just ten days prior to Trump taking office. If you're hoping to hear Obama at his most reflective and forward-looking, and to hear what tone he'll strike as he approaches becoming a private citizen for the first time in eight years, you won't want to miss it. You shouldn't get ahead of yourself, obviously, but if history is any judge, whatever he says could end up richly deserving the final spot on this list.

These 11 speeches are just a small sample of some of his greatest work throughout the past eight years. Suffice to say, I'll miss the guy.

More like this
Buckingham Palace Aide Resigns Over “Unacceptable” Comments To A Black Guest
By Shahed Ezaydi
Matt Hancock Broke a Major Rule With I’m A Celeb
By El Hunt
What To Know About Martin Bashir After Watching 'The Crown'
By Bustle UK
The Indigo Girls Taught Me Queer Relationships Could Be Messy, Too
By Hannah Soyer
Get Even More From Bustle — Sign Up For The Newsletter