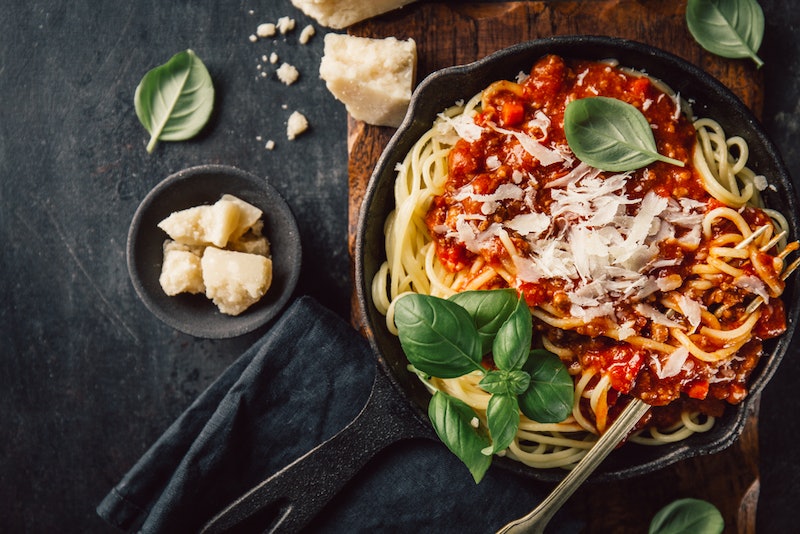 Get ready to eat your heart out, because Oct. 17 is National Pasta Day, giving you the perfect excuse to chow down on all the pasta you love. It's not that you need a reason to eat all of the pasta (of course you don't! It's basically a form of self-care), it's just nice to be able to act like you're celebrating something while you do it. National Pasta Day also gives you the perfect opportunity to post an Instagram photo of your favorite pasta dish. Everyone knows that food photos are one of the most-liked types of photos on Instagram, so you're guaranteed to get some attention there. And you'll definitely need a funny Instagram caption to accompany your National Pasta Day photo.

We don't know the history behind National Pasta Day, but one thing is for sure: pasta itself has been around for a very long time. There is a myth, based on 13th-century explorer Marco Polo's writings, that pasta was brought to Italy from China. While it's quite popular, it's also not true. National Geographic points out that there are other Polo references from the 1270s about a soldier in the Italian city of Genoa who owned a basket of "macaronis." The Muslim geographer al-Idrisi wrote about seeing pasta in Sicily a century before. Some Italian writers even say that pasta has been around since the fourth century B.C., citing a tomb that bears a relief of pasta-making equipment.

Food historians, however, believe that it probably became popular in Italy sometime around the 13th century because of Mediterranean trading in the Middle Ages.

During the Renaissance, pasta was thought of as a dish for wealthy people. But by the late 17th century, in Naples, it was becoming more of a staple in everyone's diet. Historians think this is probably because around that time, industrial pasta production was developed thanks to new mechanical press machines that could easily make the noodles.

Today, pasta is wildly popular and always delicious. So of course we have a National Pasta Day to celebrate here in the United States! We have a lot to be grateful for when it comes to this perfect Italian dish. So get a plate of pasta together, get someone to snap a photo of you eating it, and use one of the below captions for Instagram stardom:

More like this
Dolly Parton Released 4 New Baking Mixes With Duncan Hines
By Alexis Morillo
An Expert Weighs In On The Viral Raw Carrot Salad Trend
By Alexis Morillo
16 Trader Joe's Appetizers That Are Total Party-Pleasers
By Kaitlyn Wylde
19 Instagram Captions For Celebrating Black History Month
By Ayana Lage
Get Even More From Bustle — Sign Up For The Newsletter
From hair trends to relationship advice, our daily newsletter has everything you need to sound like a person who’s on TikTok, even if you aren’t.