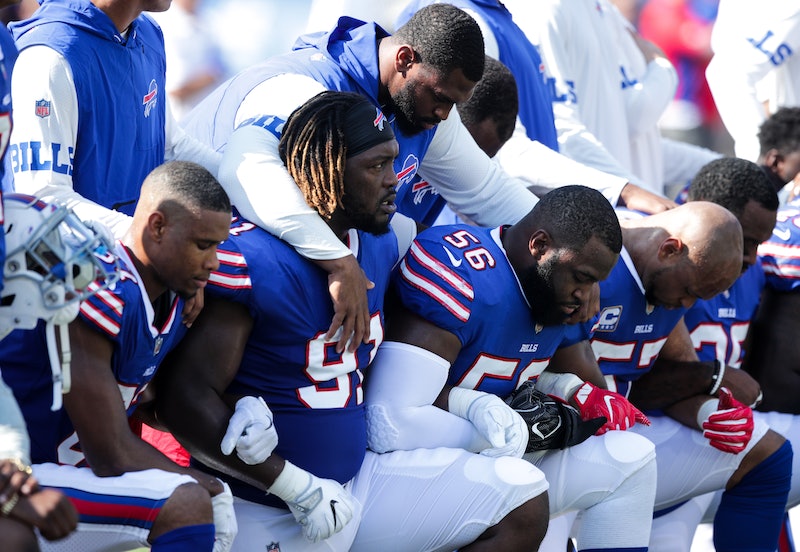 On Sunday, many National Football League players opted to "take a knee" during the singing of the national anthem at various games across the country as a means of protesting racial injustice in the U.S. While primarily serving as means of condemning racial discrimination and injustice, Sunday's protests also served to rebuke President Trump, who recently condemned NFL players for kneeling in protest during the national anthem — and suggested that kneeling players should be fired. Many on social media captured the sentiments of the day, with myriad "take a knee" memes and tweets demonstrating the powerful nature of the action and offering unwavering support to those players who choose to protest.

According to CNN, players from a variety of NFL teams took action Sunday to condemn discrimination and offer support for a player's right to protest. Indeed, several players from the New England Patriots, the Jacksonville Jaguars, the Cleveland Browns, the Denver Broncos and the Miami Dolphins chose to kneel during the national anthem, while the Seattle Seahawks and Tennessee Titans chose to not even go onto the field during the anthem.

Moreover, every player on the Pittsburgh Steelers, save for offensive tackle and former Army ranger Alejandro Villanueva, also chose not to stand on the football field during the singing of the anthem. Many players and coaches on other teams also chose to show solidarity with their teammates and support for their right protest by standing and linking arms during the national anthem.

Social media responded very strongly to Sunday's NFL protests, with many users praising NFL players and coaches for taking a stand against injustice — and reminding others why peaceful protest is so important, both as a right and as a tactic to achieve necessary change. Thus, without further ado, the following are a variety of memes and tweets that capture the powerful spirit of Sunday's protests.

More like this
The David Beckham Qatar Controversy, Explained
By Sophie McEvoy
Twitter Is In Awe Of Alex Scott & Her Show Of Solidarity At The 2022 World Cup
By Sophie McEvoy
The Best Memes & Tweets About Twitter’s Potential Shutdown
By Alexis Morillo
Matt Hancock's “Cringe” Jungle Karaoke Left Twitter Reeling
By Sam Ramsden
Get Even More From Bustle — Sign Up For The Newsletter