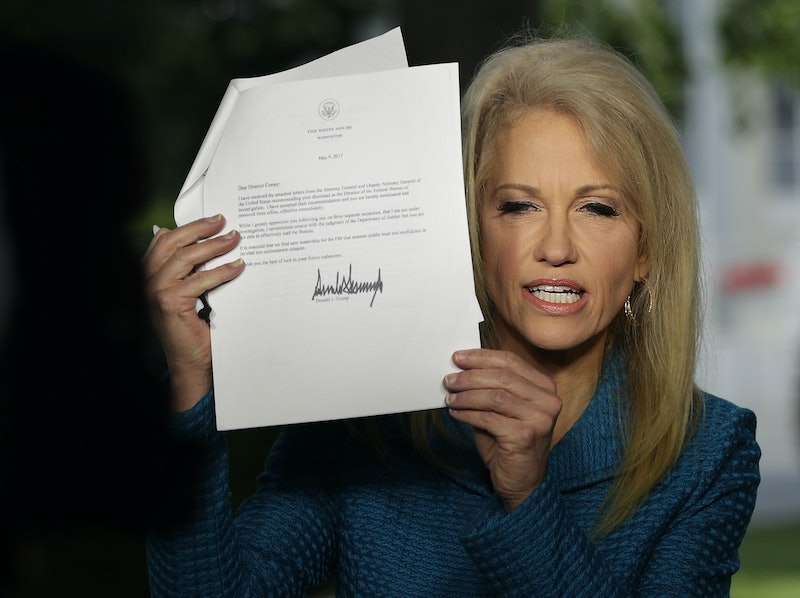 Although Donald Trump has been besieged with controversy more or less since he announced he was running for president, his supporters never fail to come up with new and creative ways to excuse his behavior. No matter how inappropriate, offensive, unprofessional, or flat-out embarrassing his behavior is, there's always someone around to defend Trump's actions with ludicrous reasoning and tortured logic.

In a sense, this shouldn't be a surprise, because in many cases, ludicrous reasoning and tortured logic is often the only way to go about defending Trump. This was constantly on display during the campaign, and things haven't changed much since then. Even people who are paid to go on TV and defend Trump often have a hard time doing so, as senior advisor Kellyanne Conway demonstrated when she characterized the White House's falsehoods not as lies, but rather, as "alternative facts."

Like many of Trump's hapless defenders, Conway was mocked mercilessly for this patently silly explanation. But amazingly, it wasn't even the most egregious example of a Trump supporter using on a laughable justification to explain why, actually, whatever Trump just did is perfectly fine. Some of the most memorable excuses are often quite amusing, albeit in a morbid and somewhat horrifying way.

During an appearance on The View, Trump supporter Ann Coulter came up with a novel excuse for the many false statements the president has made, explaining that when Trump says something that isn't true, that doesn't actually count as a lie.

"He doesn't lie," Coulter said. "He's a B.S.-er, an exaggerator." She went on to explain that when Trump says something that isn't true, "the audience doesn’t believe it, he doesn't believe it, and he knows they don't believe it, but everyone feels nice." Which, apparently, makes it all okay.

In an interview with Megyn Kelly during the campaign, former Arkansas Gov. Mike Huckabee defended Trump's crude and offensive rhetoric by comparing him to Captain Quint from the film Jaws. Like Quint, Huckabee explained, Trump is "crude" and "salty," and yet at the end of the day, he's "gonna save your butt and save your family." Hillary Clinton, in Huckabee's analogy, "is the shark" that Quint was fighting off in the film.

Kelly responded by pointing out that in Jaws, the shark eats Quint.

Trump was criticized by Democrats and Republicans alike when, after being asked a question about abortion at a town hall, he said that women who have abortions deserve "some form of punishment." But Carson had an easy explanation for the gaffe: Trump hadn't been told ahead of time that he was going to be asked that question.

"I don't believe that he was warned that that question was coming," Carson told CNN. "I don't think he really had a chance to really think about it."

4. Boys Will Be Boys

After audio leaked of Trump tacitly endorsing grabbing women's genitals without permission (he denies acting upon it) during the filming of Access Hollywood, there were countless "boys will be boys"-style defenses of his indefensible comments. One came from Rudy Giuliani, who said that it's okay to say that kind of thing because "the fact is that men, at times, talk like that."

"Not all men," the former New York City Mayor added, "but men do." Needless to say, "men do it all the time" is not a good excuse for, well, anything.

One manner in which Trump's defenders hold him to a low bar is by noting that hey, he's new to this politics thing. After the Access Hollywood tape leaked, Federalist writer Matthew Cochran made the argument that, in essence, America is already a garbage fire and doesn't deserve any better than Trump.

We're a reality TV nation, and Trump is a reality TV star. Class is something we have no business expecting or requiring.

Hear that? Those who criticized Trump for boasting about grabbing women's genitals are simply setting their expectations too high.

One of Trump's most egregious lies was his claim that "the murder rate in our country is the highest it’s been in 47 years." In reality, the murder rate peaked in the mid-1990s and has fallen steadily since then. Thankfully, Sen. Rick Santorum was around to remind us that Trump, for whatever reason, isn't "bound with all the facts."

I think Trump speaks more from emotion and how he's feeling about certain things than he does necessarily being bound by all the facts. ... I do believe that's one of his characteristics.

8. Trump Didn't Flip-Flop, The Universe Around Him Did

In April, Trump reversed his positions on four different policies in a single day. When asked to explain why Trump's stances on NATO, the Federal Reserve, the Export-Import Bank and foreign relations with China had suddenly changed, the White House Press Secretary made it clear that there had been no flip-flops. Trump had been entirely consistent; what actually happened, the press secretary explained, is that the world around Trump changed, so his old positions became his new positions. Therefore, he was entirely consistent. Ta-da!

At the risk of stating the obvious, Spicer's reasoning doesn't make sense.

Trump's firing of FBI Director James Comey sent Washington into a tizzy, and like clockwork, Conway immediately stepped up in an attempt to tame it. When Anderson Cooper asked her why Trump had suddenly let Comey go, and whether it had anything to do with the ongoing investigation into the Trump campaign's alleged ties to the Russian government, Conway said that Trump's decision "has nothing to do with Russia," and that the president simply "took the recommendation of his deputy Attorney General."

A fine explanation — except that three days later, Trump contradicted everything she said, telling CNN that before firing Comey, he considered "the Russia thing" and that "regardless of the recommendation, I was going to fire Comey."

During the third presidential debate, Trump lost his temper and called Hillary Clinton a "nasty woman." When asked if he felt Trump's comment was justified, Texas GOP Rep. Brian Babin said that it was, because Clinton was "saying some nasty things," and added that "I think sometimes a lady needs to be told when she's being nasty."

Really, this was less a defense of Trump and more a defense of misogyny in general. Babin also referred to himself as "a genteel southerner" in the same interview.

After Trump accused former President Obama of wiretapping Trump Tower, Rep. Devin Nunes defended the president on the grounds that, hey, he's new to to this whole "being president" thing.

The president is a neophyte to politics. He's been doing this a little over a year. And I think a lot of the things that he says, you guys sometimes take literally. Sometimes he doesn't have 27 lawyers and staff looking at what he does — which is, I think, at times refreshing and at times can also lead us to have to be sitting at a press conference like this, answering questions that you guys are asking. But at the end of the day, I think tweets are a very transparent way for a politician of any rank to communicate with their constituents. So I don't think we should attack the president for tweeting.

Trump may be new to politics, but that certainly doesn't mean his tweets are off-limits. After all, he certainly isn't new to Twitter.

The most frightening part about all of this is that Trump hasn't even been office for six months yet. So, yes, we'll almost certainly be getting many, many more of these types of defenses in the months and possibly years to come.

More like this
How 5 People Upended Their Lives To Fight For Abortion Rights
By Hannah Smothers
Police Shove 'Full House' Star Jodie Sweetin At An Abortion Rights Protest
By Radhika Menon
5 Ways To Stand In Solidarity With Women In America From The UK
By Sophie McEvoy
How To Fight For Reproductive Rights, Based On How Much Time You Have
By Courtney Young
Get Even More From Bustle — Sign Up For The Newsletter