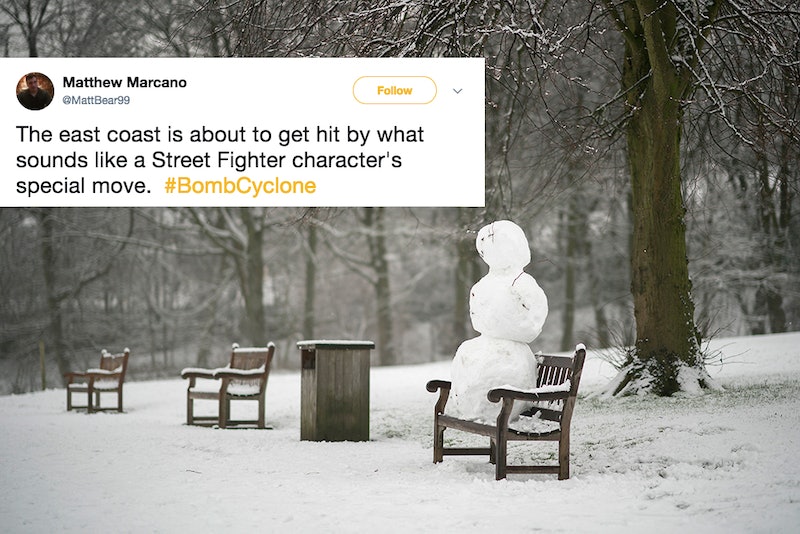 Every winter, the US is slammed with a blast of arctic weather at one point or another. Sometimes it's a blizzard, sometimes it's a cold front, and sometimes it's too cold to even understand what you're experiencing because you just want your blankie. When that blast of arctic weather is enough to be deemed a storm, it's bestowed with a name — a few names, actually — to help meteorologists and the public understand what exactly is being experienced. And, well... some of those names are weirder than others. So, in an effort to combat the frostbite we're all risking by simply living our lives this winter, I took the liberty of ranking the weirdest weather terms I could find, because while "Winter Storm Wilbur" doesn't sound too strange, "Firenado" absolutely does — and it also sounds like a ride at the amusement park that needs to be shut down immediately.

If you're wondering why we even name winter storms, there's a good reason for it. The trend began on the Weather Channel: According to Senior Hurricane Specialist at the channel, Bryan Norcross, "It's simply easier to communicate about a complex storm if it has a name, which our naming program has demonstrated." And so names are revealed, like the top baby names of the year, at the start of a storm season. The storms are named in alphabetical order as they come. From A-Z, we're at G and that stands for Grayson in this case. Naming winter storms regular baby names? Weird, but not so weird.

In February of 2010, an epic blizzard threatened the Midwest and East Coast. You might hear the term "Snowmageddon" thrown around a lot now, and let's specify that this one is not an official scientific term, but it all started with one storm and Twitter poll. The Washington Post asked readers to vote for a name. The Washington Post's Capital Weather Gang blog reported that, "'Snowmageddon' was quite popular for a storm name, and it would also make a good hashtag." And so it was.

It's snowing and it's pretty, but there's also a thunderstorm? Thundersnow is what happens when "thunder and lightning occur while it’s snowing" according to an article in Newsweek. This weather term sounds like a weather event brought on by Thor.

Sea Smoke looks and sounds like something you don't want to cross, but in reality, it's just complex fog. Dictionary.com defines it as, "fog caused by cold air flowing over a body of comparatively warm water, the vapor condensing in small convective columns near the water surface and giving the appearance of smoke or steam." Basically, it looks like Poseidon is pissed.

I hope you never cross a Firenado. It sounds dangerous and like the perfect title for a disaster movie. Live Science explains that firenados are, "created by hot, dry air rising rapidly from the ground." So... it looks like a spire whirling straight from hell, is what you're saying?

Isn't wind just a tornado? Nope: Weather is a lot more complicated than that, and tornados are something entirely different. While tornados involve a conflicted meeting between cold air and warm air that results in a furious vortex, a gustnado is described by AccuWeather as, "a short-lived, ground-based swirling wind that can form on the leading edge of a severe thunderstorm."

As for the Bomb Cyclone, that's probably a new one if you don't study weather terminology on the regular. The Weather Channel defines this condition as, "having undergone bombogenesis or "bombing-out." In short, it happens when a low pressure system drops rapidly, resulting in a "bomb"-like explosion of winter weather madness. It could cause some intense conditions, including snow, wind, and ice. It might sound funny, but it's nothing to joke about. Dangerous weather conditions like this are not only hazardous, but life-threatening. It's a good idea to check up on those you know who live alone, especially the elderly, to see if they need a warmer home, or any supplies to get through the storm.

Next time your hair is affected by the humidity, you might find yourself saying "swullocking." It's a fun word to say. Mental Floss reports, "This is an old southeast English word meaning 'sultry' or 'humid.'" And, it could indicate that a thunderstorm is well on its way. You know the scene. It's humid and clouds are rolling in over your city. That's "swullocking."

Mental Floss also points out that the word "Blenky" exists. They define it as, "'to snow very lightly.' It’s probably derived from blenks, an earlier 18th century word for ashes or cinders." It's an odd term, but more cute than intimidating.

The National Weather Service defines a derecho as, "a widespread, long-lived wind storm. Derechos are associated with bands of rapidly moving showers or thunderstorms variously known as bow echoes, squall lines, or quasi-linear convective systems." If you're not a fan of the wind (me, hi), this doesn't sound fun.

A weather term that will quickly grab your attention is: haboob. USA Today explains that this is, "one term for a massive dust storm that occurs in sandy, dusty areas with extremely dry conditions." It's an intense sand storm that can envelope a city. If you haven't ever studied weather, this is a term that has probably surprised you.

More like this
TikTok Is Using A ‘Love Island’ Sound To Expose Their Weird Crushes
By Courtney Young
How To See The Lunar Eclipse On May 15-16, 2022
By Kaitlyn Wylde
The Viral TikTok “30,000” Sound Fits Nearly Every Scenario
By Courtney Young
What To Know About Taking More Than 1 Piriteze Per Day
By Bustle UK
Get Even More From Bustle — Sign Up For The Newsletter