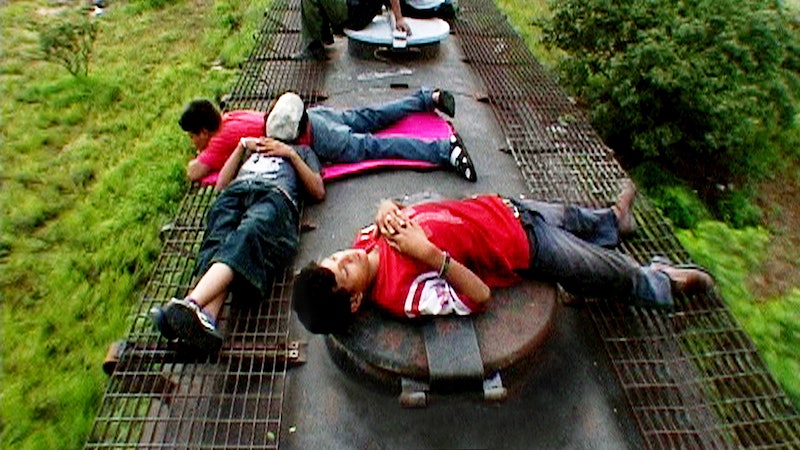 Immigration is one of the most complicated and discussed issues facing Americans these days, especially now that President Trump is in office. Political debates on what immigration should look like in our country can make it easy to forget that there are millions of people in the U.S. who will be affected by what’s decided in our nation's capitol. Immigrant culture is a major part of American life, and the history of the United States is deeply connected to the history of immigration. That’s why it's so important to check out the documentaries about immigration and immigrant life that are out there, and familiarize yourself with the stories of people who've come to live in this country.

The 12 documentaries below all explore the different obstacles, paths, and decisions of people who've moved to America from other countries in order to find better lives, as well as what it's like to be an new immigrant in the U.S. Some are more serious documentaries, while others are narratives that incorporate some of the more societal and personal issues of immigration. All in all these, these docs serve as a reminder of the struggle a lot of immigrants living in the United States have to face when striving to succeed. Check them out.

Rain in a Dry Land is an eye-opening documentary that chronicles the lives of two Somali Bantu families who escape militants during the Somalian Civil War. They are then transported by relief services from refugee life to Springfield, Massachusetts, and Atlanta, Georgia. As they settle into newfound American life, they find themselves confronting racism, poverty, and culture shock. The documentary captures their attempts to learn more about American life and their efforts to survive in the U.S. in order to create a safe haven for their war-torn families. Rain in a Dry Land is available on Amazon Video, YouTube and Vudu.

This seven hour docu-series follows a diverse group of immigrants and refugees from various countries as they leave their families behind and learn what it means to be new Americans in the early 2000s. The New American series is available on iTunes.

Which Way Home will have you in tears. This documentary follows a group of young, unaccompanied Central American children trying to make their way through Mexico in order to reach the United States. Jumping the border to a enter a new land, the kids battle dangerous traveling conditions, poverty, and potential predators. Their desire to have better lives is so moving, as are their struggles. The documentary is available to stream on Vudu, YouTube and Google Play.

Lost Boys of Sudan is about two orphaned Sudanese boys whose lives have been affected by the civil war in their country. The film follows them as they travel from a refugee camp in Kenya to the United States to try to start new lives. They meet their adoptive families, begin to attend school, and get part time jobs. But despite their new start, they have difficulty adjusting to life in America. Lost Boys of Sudan is available to watch on PBS.

5. The Other Side Of Immigration

The Betrayal is about the transition of immigrants from Laos to New York City after the United States' Secret War in Laos, and the difficulty families face to assimilate into American lifestyle. The documentary, which won the 2010 Creative Arts Primetime Emmy Award for Exceptional Merit in Nonfiction Filmmaking, is available to watch on YouTube.

I Learn America follows the lives of five immigrant students at Brooklyn's International High School At Lafayette as they adjust to American life. The high school is dedicated to newly-arrived immigrants, with approximately 300 students coming from over 50 countries and speaking over two dozen native languages. The documentary is a must see, as these five teens face the normal pressures of adolescence as well as the legal and linguistic struggles of cultural representation. You can watch the full length documentary by ordering a copy through the film's website.

8. Who Is Dayani Cristal?

Who is Dayani Cristal? retraces the steps of a migrant from El Escanito, Honduras, to the Sonora desert in Arizona, where his body was found with the tattoo "Dayani Cristal" in August 2010 by border control officers. Officials delivered his body to the Pima County Medical Examiner’s Office to learn who this man was and the location of his family. Oveer a 2,500-mile journey, Gabriel García Bernal retraces the migrant's steps, returning to his hometown and narrating his thoughts as he rides in buses and atop train cars. The documentary can be streamed on Amazon, YouTube and Google Play.

This documentary examines what goes on behind the doors of the asylum office of the INS (the U.S. Immigration and Naturalization Service), where asylum officers, lawyers, translators, economic migrants, and refugees can be found. Due to its in-depth look at the system, the documentary has become a core curriculum element in most immigration law programs. Well Founded Fear is available to watch on Amazon, iTunes and YouTube.

Welcome to Shelbyville documents a Southern town as its leaders and residents — White people, African Americans, Latino and Somali immigrants — grapple with their beliefs, histories, and changing community as more immigrants come through the town. You can watch this documentary on Amazon.

Citizen U.S.A.: A 50 State Road Trip crosses the U.S. to document naturalization ceremonies in all 50 states in order get immigrants from around the world explain their decisions to become American citizens. My family members have all been through the naturalization, process, so to see the backstory for other immigrants showcased is truly inspiring. To watch this film, check it out on Amazon and HBO GO.

Underwater Dreams follows undocumented Mexican teen immigrants who learn how to build underwater robots. The four high school students enter a NASA-sponsored robotics contest and beat MIT and other prestigious universities. However, their unlikely victory wasn't as bright as they wanted it to be, mainly because they were constrained by their immigration status. This incredible story is up for streaming through iTunes and Amazon.

Through these documentaries, we all can gain more knowledge and perspective about immigrant culture and what life is like for those coming to the U.S.