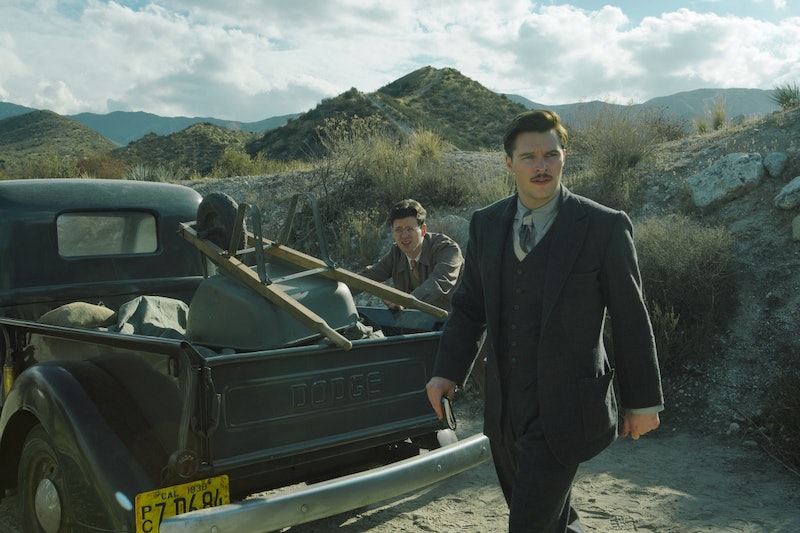 The CBS All Access drama series Strange Angel premieres June 14 dramatizes the true story of Jack Parsons, a rocket scientist who also happened to be into something called "sex magick." Truthfully, there isn't much in life story that needs to be heavily dramatize, because Parsons lived many lives, each more unbelievable than the next. The show is based primarily on George Pendle's biography of Jack Parsons, who was a real person with a pretty wild trajectory.

The first sentence of Jack Parsons' Wikipedia page just casually mentions that he was a Themelite occultist as well as a scientist. Thelema is a spiritual philosophy or religion developed and made popular by occultist writer Aleister Crowley, who the British press called "the most wicked man in the world" and who called himself "the Beast 666."

According to Wired, Parsons' interest in dark magic ultimately got him written out of NASA's early history. As a rocketeer, he developed technology used to help win World War II and helped found the Jet Propulsion Laboratory that developed weapons and other technology. Outside of that, he got involved in occult religions and developed an interest in harnessing sexual energy to do spells.

“Cults were a really big thing in LA [in the '40s]; there were all these offshoot religions springing up all over the place,” said Irish actor Jack Reynor, who plays Parsons on the show, in an interview with the New York Post. “That was surprising to me, because I know America to be quite a conservative place a lot of the time. So to read about how people were embracing this culture and these religions is really interesting.”

Even the Drunk History segment, however, doesn't scratch the surface of how bizarre and eventful this man's life was in reality. Here are some more eye-opening facts that Strange Angel will hopefully cover.

1. His Given First Name Was "Marvel"

Let's start with a small fact. According to The Los Angeles Times, he was born Marvel Whiteside Parsons in 1914 and named after his father — but when Marvel Sr. left the family, his mother took to calling him John. Then, after an out of body experience well into his occult days, he was called "Belarion Armiluss Al Dajjal, antichrist." So Marvel is actually pretty tame, comparatively.

2. There's A Crater On The Moon Named After Him

The crater is simply called "Parsons" and it's located on the dark side, natch.

3. He Was Friends With L. Ron Hubbard

Yes, the future founder of Scientology. The LA Times reported that a mutual interest in "the mind's power" brought these two men together.

Not only were they friends, there's a whole soap opera's worth of drama between the two men. Parsons' wife Helen became pregnant by one of their many Bohemian houseguests, and Parsons himself involved in an affair with Helen's teenage sister Sara. Then Hubbard moved into the house and ultimately married Sara.

According to the LA Times, Parsons and Hubbard fell out over a "sailboat venture that ended in a court dispute." According to Wired, Hubbard basically scammed him for money.

4. He Worked For Howard Hughes

In order to make ends meet later in his life, Parsons worked for another eccentric figure, The Aviator himself, at Hughes Aviation. According to The Daily Dot, Parsons smuggled secret documents relating to some of Hughes' projects out of the company — which caused him legal trouble down as he happened to also be working for the Israeli government at the time.

5. He Tried To Conceive A "Moon Child"

After Jack and Helen Parsons got divorced, the scientist was involved with an artist named Marjorie Cameron, per the LA Times. The two embarked on a 12-day sexual ritual to produce a "moon child" — meaning a child born with magic and mystical powers of their own — that involved naked women jumping through fire and something about the astral plane, an alternative dimension postulated by several world religions. This, apparently, finally got the neighbors to call the cops on the couple, but nothing ultimately happened.

According to Air & Space, Parsons, his childhood friend and engineer Ed Foreman, and Caltech grad student Frank Malina were dubbed the "Suicide Squad" — when they started running rocket experiments on campus — by concerned students. This was almost twenty years before that phrase premiered in DC Comics.

I height [sic] Don Quixote, I live on peyote,

I never knew sadness, but only a madness that

burns at the heart and the brain.

And took a lot of drugs, apparently. The above verse opens the LA Times article, which reveals that in childhood, Parsons was most interested in reading poetry and Jules Verne science fiction.

This is another way that the LA Times said Parsons used to get cash after quitting Caltech. Why not? As a rocket scientist, Parsons was good with explosives, after all.

9. He Was Investigated By The FBI

As if moon children, nitro, and antichrist cult activities weren't enough, Parsons was also investigated for espionage and consorting with Communists, per The Daily Dot.

10. He Believed He Summoned His Second Wife

According to Wired, when Parsons met artist Marjorie Cameron, he wasn't surprised because he had been doing spells of a sexual nature to conjure the perfect woman. A collection of poems written about Cameron by Parsons titled Songs For The Witch Woman was later published.

11. He Put Away Other Criminals

Wired notes that he was often called in as an expert witness in bomb trials.

One of the reasons that Parsons was able to dabble in alternative religions and make such powerful connections could be related to the fact that, according to the LA Times, he and his first wife moved into a mansion on "Millionaire's Row" in Pasadena, right next to the former estate of beer baron Adolphus Busch — he had famous gardens, you may have heard of them.

Will Strange Angel show these aspects and more as the show progresses? Even Parsons' death is fascinating and strange. He died in a laboratory explosion in 1952, though his death was deemed to have been either suicide or an accident, Cameron and some of his friends had conspiracy theories about foul play, according to the LA Times.

Clearly this is all rich stuff for a television program — Strange Angel will have material to draw from for years and years if the show succeeds.