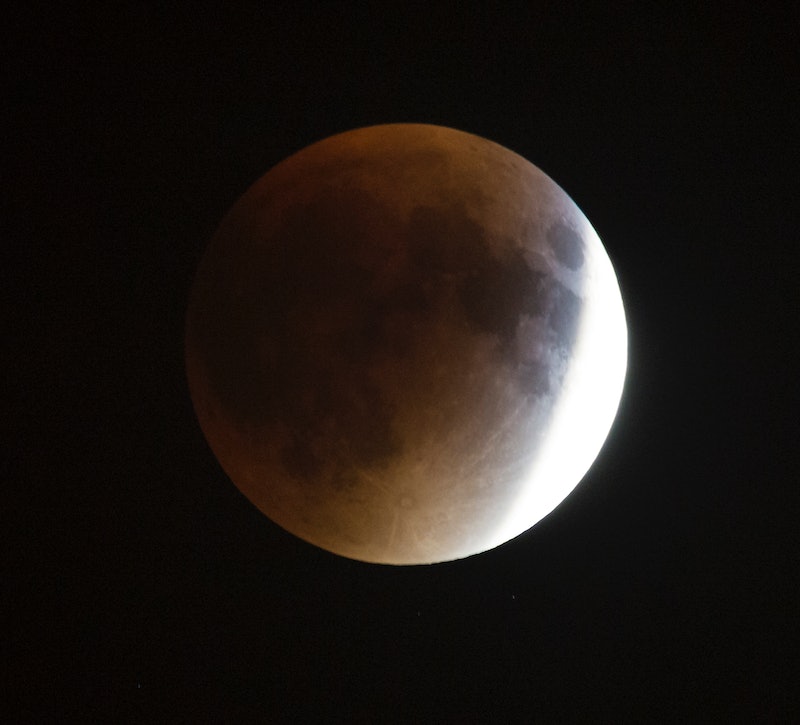 At this point you've definitely set an alarm in your phone to wake up in the early morning hours of Jan. 31 to see the super blue blood moon. Right?! The second full moon of the month of January — aka, a blue moon — is also considered a super moon and it's also a lunar eclipse. It's the first time in 150 years us Earthlings will be graced by those three lunar events happening at the same time. Because it's the second full moon in a single month it also earns the title of "Blue Moon." Unsurprisingly, there are many super blue blood moon superstitions revolving around the astronomical body that orbits around us.

You've heard the phrase, probably tossed it around a few times and definitely have sung along to it: once in a blue moon. But what exactly happens "once in a blue moon?" What's so ~mysterious~ about it, other than it doesn't happen all that often? Blue moons, as a matter of fact, aren't even blue. They glow just the same. It got its name from an old English word that means "betrayer." You know, because it's the second full moon in one month which ~fools~ the calendar.

We are all familiar with the superstitions that come with a full moon. You go crazy. Animals freak out. There are higher crime rates. Turns out, there's a slew of specific superstitions for the blue moon and the lunar eclipse from around the world. If you're a person who avoids walking under ladders, these might be good to know about.

It's believed by Tibetan Buddhists that any good acts you commit under the the lunar eclipse are multiplied. The Farmer's Almanac is quick to also include that this karmic superstition goes the same way for anything negative you commit under the eclipse. Call someone up and tell them you love them. Hold the door open. Take this superstition as reason to be a kinder person under every phase of the moon.

2. It's A Good Time To Resolve Feuds

National Geographic reports that the Batammaliba people in Togo and Benin have a myth revolving around the lunar eclipse. The myth goes, "the sun and the moon are fighting during an eclipse, and the people encourage them to stop." To this day the lunar eclipse is the perfect time to come together and resolve old feuds.

3. If Girls Stare At The Moon They'll Become Pregnant

Talk about taking birth control to out of this world measures. If you're not here to play around, don't look at the blue moon. Multiple folklore sites list staring at the blue moon as a way for girls to ensure they'll get a bun in their oven.

To bring a wave of good fortune, pick flowers under the glow of the blue moon. Whether an abundance of wealth follows the bouquet of wild flowers, you'll at least have a gorgeous floral display to Instagram.

5. Don't Point At The Moon — Especially Not Nine Times

A superstition from the British Isles cautions against staring at the moon. Apparently, the man residing on it finds it to be incredibly rude. It's considered so rude in fact that if you point nine times at the blood moon you'll be refused entry to Heaven. Just like that.

6. Turn The Bed For Fertility

If you want children, it's apparently superstition to turn your bed over for better fertility under a blue moon. This is not scientifically proven.

7. Looking At The Blue Moon Through Glass Brings Bad Luck

We all had to view the solar eclipse through glasses, but when it comes to this lunar eclipse and blue moon, it's best not to use any kind of glass — from a drinking vessel to your specks — to peek at the moon. Otherwise, you might tempt 30 days of bad luck.

The Farmer's Almanac says, "Many Native American tribes say lunar eclipses are a sign of a transformation to come here on Earth (based on their belief that the moon controls and regulates our planet)." Look out for anything ~shifting~ around you.

9. Turn A Coin Over In Your Pocket For Good Luck

Hey, worth a shot!

10. Don't Sleep With The Blue Moon On Your Face

If a regular ol' full moon is rumored to make people act a little more nutty than normal, the blue moon can apparently lead to lunacy. Do yourself a favor and draw the curtains. Even if you won't go crazy by the light of the moon, you'll get a better night's rest.

11. Eating Will Cause Indigestion

In India, some people avoid eating and drinking during solar and lunar eclipses to avoid indigestion.

12. If You Start Bleeding, It'll Be Harder To Stop

Be extra careful when slicing up apples to snack on. It's superstition that if you cut yourself, the bleeding will take longer to stop and a scar will be left for the rest of your life.