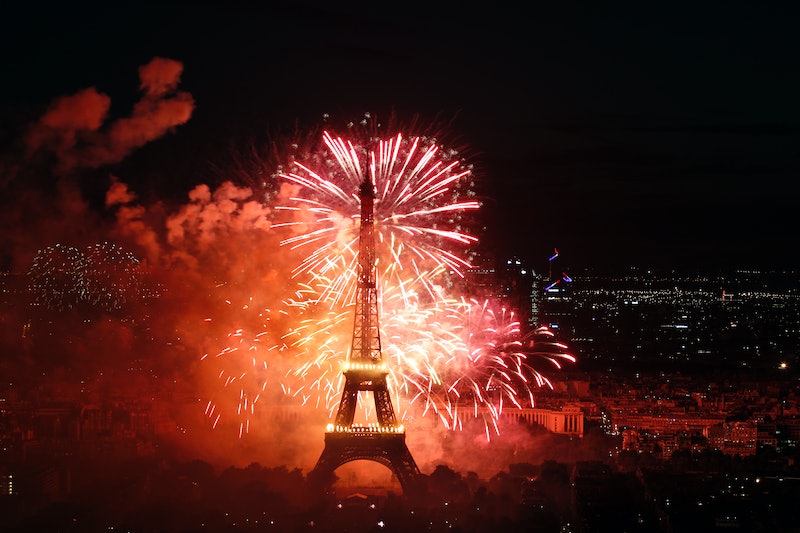 Today, Bastille Day, is the French celebration of the day in 1789 credited with the beginning of the French Revolution. If you want to celebrate what is known as la Fête Nationale in France, these Bastille Day 2018 Instagram caption ideas about resistance and hope are perfect, even if you're not in France. Sure, you may be celebrating Bastille Day by honoring French culture (brie and baguettes, anyone?), but it's important not to forget that this holiday has revolutionary origins.

On July 14, 1798, amid widespread famine and unemployment, revolutionaries stormed the Bastille — a military fortress and prison, the website HISTORY explained. "As a prison, it held political dissidents (such as the writer and philosopher Voltaire), many of whom were locked away without a trial by order of the king," HISTORY noted. Ultimately, the French revolution was prompted by the government's impending economic disaster. "Following a harsh winter, violent food riots began breaking out across France at bakeries, granaries, and other food storage facilities."

Similar to the Independence Day celebrations in the U.S., Bastille Day is celebrated annually on July 14 with fireworks, parades, and parties. According to the website Time and Date, Bastille Day celebrations take place around the world, including in Milwaukee, Minneapolis, New York City, Philadelphia, San Francisco, and Seattle. There are also festivals of French culture in South Africa and Hungary.

So go ahead and post that #TBT of your Paris vacation, or your study abroad in Marseille, or your French-inspired picnic. But just remember that July 14 has a pretty significant meaning that's all too resonant today. If you want to celebrate the resistance, these Bastille Day 2018 Instagram captions can give you some inspiration.