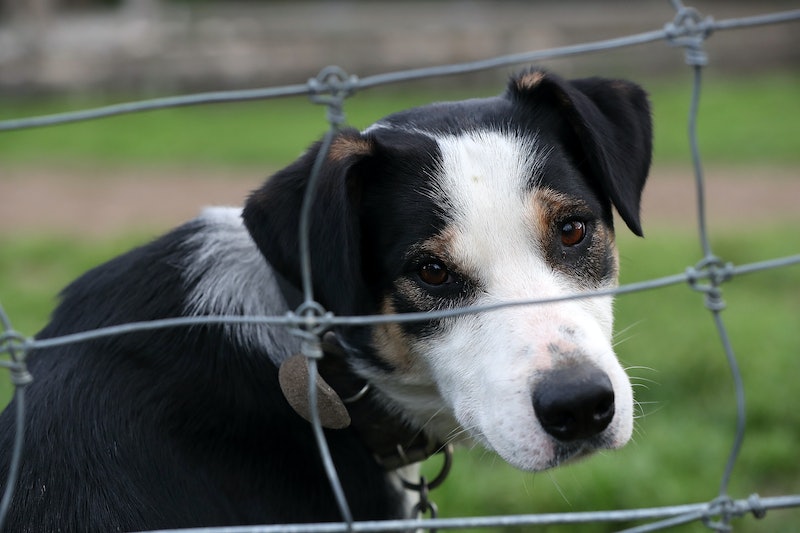 I don't think I need to tell you that dogs are special, wonderful pets who can make your life a lot more magical. Dogs are your number one buddy who never let you down, always bring a smile to your face, and make you feel so loved the second you walk in your door. There's even evidence that they can improve your health. They're a gift and we don't deserve them, honestly! But here's the thing: sometimes owning a dog can be a little weird.

It's often said that animals have paranormal sense that humans don't — or at least, one that humans don't want to acknowledge. There's no science behind this, of course, but that doesn't mean it isn't true. Pet psychologist Marti Miller told Animal Planet that she believes both dogs and humans possess a sixth sense that connects them to some weird things. Miller said, "The simple answer is, we don't know that dogs see ghosts or spirits. If you observe a dog standing in the corner, barking at nothing visible, then there's a pretty good chance that he's barking at an entity, spirit, or energy that doesn't belong there."

That's slightly terrifying if you're a dog owner, because you may have probably witnessed your dog doing something like that. My dog will sometimes randomly wake up in the middle of the night and start barking and growling at the back door. When she's outside, it seems like there's nothing there, but she runs all around, sniffing. My logical side believes it's an animal. But my imagination tells me it's definitely a spirit.

If you don't believe that, here are 13 other creepy dog stories from people on Reddit. Just a warning: don't read these while you're alone in your home with your dog.

More like this
26 Ghost Story Podcasts To Get You Ready For Halloween
By Jessica Booth, Mia Mercado, JR Thorpe and Emma Carey
14 Scary Campfire Stories To Tell Your Friends
By Charlotte Ahlin and Kaitlyn Wylde
These 25 International Horror Movies On Netflix Prove Fear Is A Universal Language
By Bustle Editors
15 Easy Pranks To Play This Halloween
By Emily Kelley and Lauren Grant
Get Even More From Bustle — Sign Up For The Newsletter