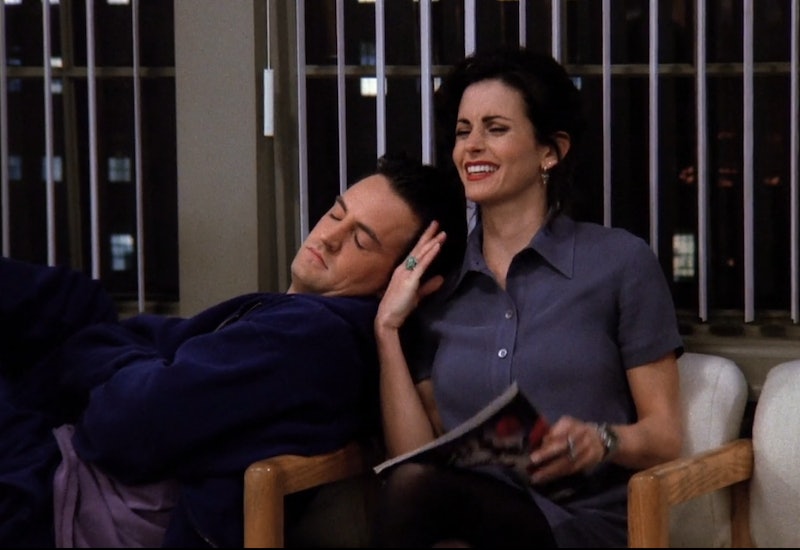 Friends was on for 10 seasons, and during that time, there were plenty of relationships, babies, weddings, and career moves for all six of the main characters. And because the show was on for so long and so much happened, it's easy to look back at earlier episodes and see potential hints at what was to come. If you look just at the very beginning, there are some moments from Friends Season 1 that seem to foreshadow things that would occur down the road.

Some of the quotes and scenes are pretty obvious foreshadowing, and some of them seem like they might have just been fun coincidences that only work as foreshadowing in hindsight. For instance, from the moment Rachel showed up in the pilot, it was clear something was going to happen between her and Ross. But then, there are moments like Chandler and Monica joking around about babies that couldn't possibly have been a look at what was going to happen later on, but work as awesome hints at their relationship when you re-watch the episodes.

There is a lot to sort through over the series' 236 (!!) episodes, so shout-out to the wonderful users of the Friends Wikia page, who really gave it their all with their in depth episode summaries.

1. Rachel Showing Up In A Wedding Dress — Episode 1

OK, so this one is very obvious, but Rachel shows up in her gown after fleeing her wedding to Barry just as Ross says, "See, I don't want to be single, OK? I just want to be married again!" The tension between them starts immediately, so this isn't exactly foreshadowing, but hey, they end up being a big deal and this is their first big moment that lays the groundwork for everything that's to come.

After Rachel arrives, Joey is Joey-ish towards her, and Monica says, "Joey stop hitting on her. It's her wedding day." He responds, "What? Like there's a rule or something?" It's a bit of a stretch, but Joey isn't too much of a relationship rule follower since years down the road he ends up confessing that he has a thing for Rachel while she's pregnant with Ross' baby.

During Episode 7, Phoebe tells Joey that Monica used to have a crush on him when he first moved into the building. While Monica and Joey never get together (even though that was the writers' original plan), it's revealed in Season 7 that when Monica ended up hooking up with Chandler in London, she had actually gone to his room looking for Joey.

In the first Thanksgiving episode, Ross is worried about talking to Carol's belly so their unborn baby can get to know his voice, and Phoebe suggests a plan for him to get used to the idea. "You put your head inside this turkey, and then we'll all talk and you'll hear everything we say," she says. He doesn't do it, but there are heads in turkeys to come. In the Season 5 Thanksgiving episode, both Joey and Monica are shown with their heads in (very fake) turkeys.

In Episode 12, Rachel accidentally tells Ross that he and Carol are having a baby boy. Then, all the way in Season 8, Ross reveals he and Rachel are having a girl, even though she's been trying to avoid finding out.

Rachel doesn't quit working at Central Perk until well into the third season, but her fashion career is brought up back in Season 1, when she gets an interview to be an assistant buyer at Saks Fifth Avenue. In this episode she applies to a lot of jobs — like, an entire box full of resumes worth of jobs — but the interview at Saks is mentioned specifically. While she doesn't get the job, it's a look at her future career.

In this episode, Rachel has sex dreams involving Chandler and Joey. Is it a sign of the fact that she'd end up hooking up with Joey? Maybe not exactly, but in the Season 9 episode "The One With Rachel's Dream", she dreams about kissing Joey and says, "Well, that's new." It's not that new, Rachel!

9. Monica & Chandler Ending Up Together — Episode 23

The episode in which Carol and Ross welcome baby Ben is packed full of foreshadowing and moments that will become callbacks for Monica and Chandler. First up, when Monica and Chandler are waiting in the hospital, Monica talks about wanting to have a child, and Chandler says that when they're 40, if neither of them are married, they should have a kid. Monica gets annoyed at even the suggestion that she wouldn't be married by 40, but the point is, this totally foreshadowed Monica and Chandler getting married and having children, as pointed out by BuzzFeed.

Not only does the episode hint at Monica and Chandler getting married and having kids, it hints at them having twins. The whole "what if when we're 40" conversation starts because a woman comes through who has just welcomed twins, and Monica says, "No fair! I don't even have one. How come they get two?"

In another instance pointed out by BuzzFeed, during the same episode, but before the twins thing, Monica says, "I want a baby," and Chandler says, "Not tonight, honey. I got an early day tomorrow." Then, in the first episode of Season 9 when a married Monica and Chandler are at the hospital to meet Ross and Rachel's daughter, Emma, Monica again says, "I want a baby." This time, Chandler jokes, "Honey, we've been over this. I need to be facing the other way."

In the Season 1 finale, Joey reveals that he's part of a "fertility study" at the NYU medical school. Later, in the Season 3 episode "The One With The Jam", Monica decides to look into having a child on her own by using a sperm donor. When she reads one of the applications aloud she realizes the donor is Joey. In the episode, Rachel asks, "When did you go to a sperm bank?" and Joey says, "Right after I did that sex study down at NYU." Hooray for continuity!

The finale of the first season mirrors the finale of the series. In the first one, Rachel goes to the airport to confess her love for Ross, only for it to be revealed that he's returning with his new girlfriend, Julie. And, of course, in the series finale, Ross goes to the airport to try to stop Rachel from going to Paris. And while he isn't successful at stopping her from getting on the plane, she does get off in dramatic fashion.

Certainly, there are more moments of foreshadowing as the series goes on, so good thing all 200-plus episodes are still available both online and re-air on TV all the time.