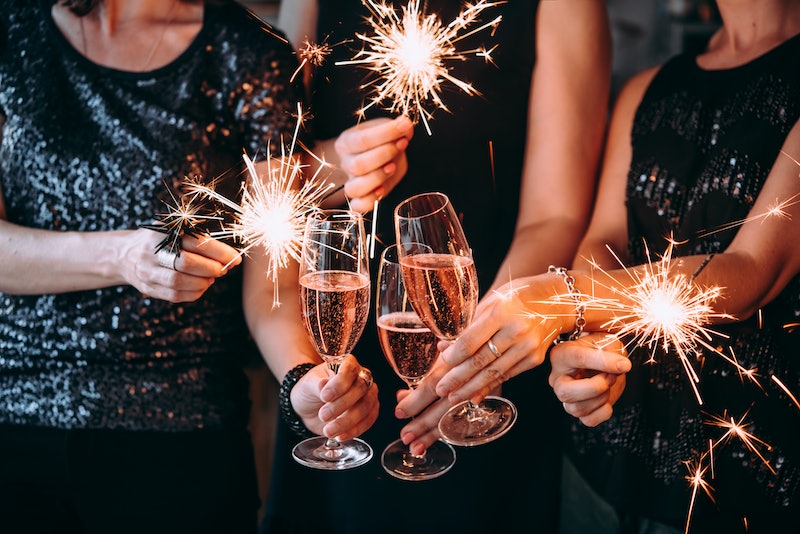 New Year's Eve is one of those nights that you want to have plans set in stone weeks in advance, whether they involve a movie night with your friends or a fancy party in an exclusive venue. The good parties and celebrations typically require RSVPs and a purchased ticket, so you can't just decide you want to go an hour before. Even doing something low-key requires time — if you don't talk to the people you want to hang with beforehand, they'll make plans that don't involve you. We all know this, yet every year, many of us end up spending Dec. 31 trying to make last-minute New Year's Eve plans, frantically texting every friend we've ever met and weighing what we think are our few options.

Actually, though, you probably have more options than you think. The first step towards making last-minute NYE plans is to get rid of all the big expectations for the night. Sure, New Year's Eve is supposed to be about extravagance and glamour, but that doesn't mean it has to be! Once you stop thinking that there's a right way to spend New Year's Eve, you can find something fun to do, even if you're planning it a few hours before. Here are a few last-minute New Year's Eve plans you'll actually love — so that even if you missed the boat on that party your friends are going to, you'll still be able to enjoy yourself as you ring in 2020.

1. Have A Game Night

If you can find at least one other friend who doesn't have plans then suggest having a game night. This could also be a good way to hang with family, like your siblings, parents, grandparents, or cousins. I suggest something easy that gets people into it, like Taboo or Cranium. You could do something very ~2010s~ like What Do You Meme, or something old-school, like Pictionary. You don't even have to go out to buy something if you don't want to — the app store has apps like Picolo or ‎Heads Up!, which only requires your phone. Or get some controversy going with Cards Against Humanity.

Finding a last-minute reservation at a cool restaurant on New Year's Eve? Probably not going to happen. Even the local places might be packed with parties. Even if you do manage to get in, as a former waitress I can tell you that you can expect long wait times, mediocre dishes (because the kitchens are backed up), and lots of crowds. Skip all of that and do a takeout night, inspired by Lorelai and Rory Gilmore. Order a bunch of stuff from your favorite spots, no limiting yourself, and enjoy as you ring in the new year.

Most places do some sort of fireworks show on New Year's Eve, whether it's something huge and expensive or a small show at a local spot. Fireworks are pretty, especially when counting down to midnight, especially against a backdrop of snow. Do a little research and find a firework show near you, then grab your significant other, a friend, or a family member, bundle up, and watch them. It's hard not to feel a little bit of New Year's magic during that.

If you're a decent cook, put your skills to good use by making your own delicious dinner. This is the perfect day to try something new and extravagant. Do it for yourself or invite someone over and just go all out. Then eat that fancy homemade dinner in the comfort of your own home in your favorite leggings.

Not into the idea of making or ordering dinner? Just do a wine and cheese night. Grab a selection of cheeses and a bottle of wine — these two things automatically make anything feel more fancy and fun. Invite a friend over or just enjoy your snacks on your own. These things are easy to pick up and put together, so you can do them even if you only have an hour or two to get everything done.

6. Head To Your Local Bar

If your plans fell through at the very last minute or you literally just waited until a few hours before midnight to want to do something, just go out to your local bar or hangout spot. It might not be fancy, but if it's a place with a lot of memories, it could be fun, and you might run into some people from your past (which could be a good thing!). At the very least, it gets you out of your house if you really don't want to stay in all night, and it's close enough where you don't have to go too out of your way.

7. Have A Movie Marathon

Since New Year's Eve is, obviously, a holiday, a lot of things will be closed — but movie theaters usually stay open. Check the times at your local theater, and if they're open, see a few new movies in a row. You can load up on popcorn and candy, get comfy in sweats, and enjoy the night with your favorite stars. As an added bonus, you'll get to catch up on all the films nominated for awards so that you'll actually know what's going on when you watch the Oscars.

8. Host An Impromptu Hangout With Whoever Is Around

It might feel like you're the only person in the world who isn't doing anything on New Year's Eve, but trust me: that isn't true. Text everyone you know and I guarantee you'll find at least one or two other people who have nothing to do, but who want to do something. If you're up for it, host a small party with those friends, and tell them to bring a friend too. It might end up being a totally random group, but sometimes those are the most fun.

9. Try A Staycation Night At Nearby Hotel

Most hotels will inflate their prices on holidays, especially New Year's Eve, and if you're in an urban area, a lot of them will probably be pretty booked up. But try a staycation night anyway — hop on a site like HotelsTonight.com, and see what's available near you. Sometimes, just being in a hotel room can feel like more fun, even if you're only five minutes from your home. If you feel like dropping more money, get some room service and order some movies.

Break out the face masks, nail polish, cucumbers, and candles and DIY your own spa night. You can do this solo or invite friends over to come over and seriously chill out.

Don't want to leave the house, but feel like doing something? Invite friends over for a DIY paint night. You grab the art supplies and they bring the wine so you can sip as you paint.

If you want to be out and about but not at an overpriced bar or fancy party, New Year's Eve is a great time for a DIY scavenger hunt — even if it's just with a friend or two. Come up with a list of challenges that will take you across your city together and assign each one 1, 2, or 3 points and see who gets the most by midnight.

It might not be everyone's idea of a good time, but if you don't want a hangover and feel like being active, a lot of cities offer midnight classes or midnight runs. If you have friends who want in, you could even host one at your home with a YouTube video and some post-cool down treats.

This article was originally published on Dec. 10, 2017