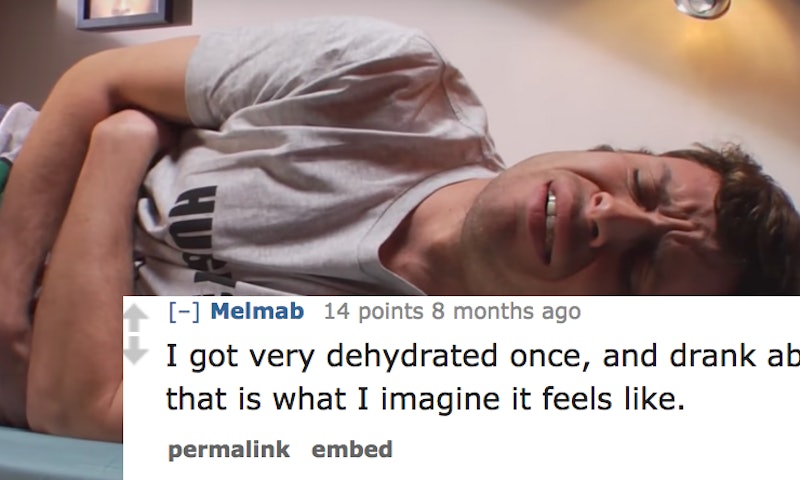 If you've never had a period, there are just some things about it that hands down (uterus down?) you will never be able to understand. That hasn't stopped the internet from making a few educated guesses, though. That's what happened when one Redditor asked what men think period cramps feel like — and the answers ranged from comical to graphic and everything in between.

How does one explain period cramps? There is no comparable feeling, truly. But if you were to get run over by a semi and then beaten with a bag of bricks, that might come close. True, we can maybe give some men who don't have periods a bit of credit here — scan the pages of YouTube and you'll see many videos of guys experiencing something similar to period cramps through electrical stimulation — but they only have to experience the nightmare once to have a better understanding of what lives of people who have periods are like one week out of every single month.

And there's so much more than the pain itself. There's the fatigue, the emotional roller coaster, the ritualistic consumption of an entire Snickers bar and then living in the post-sugar existential fallout. There's the feeling of sneezing and hoping nothing horrible just happened in your pants, and the impending mountain range developing on your forehead due to out-of-control hormones and the family size bag of potato chips you just finished off.

If nothing else, though, props for trying to imagine the pain we go through. Here's how guys picture period cramps, according to Reddit.