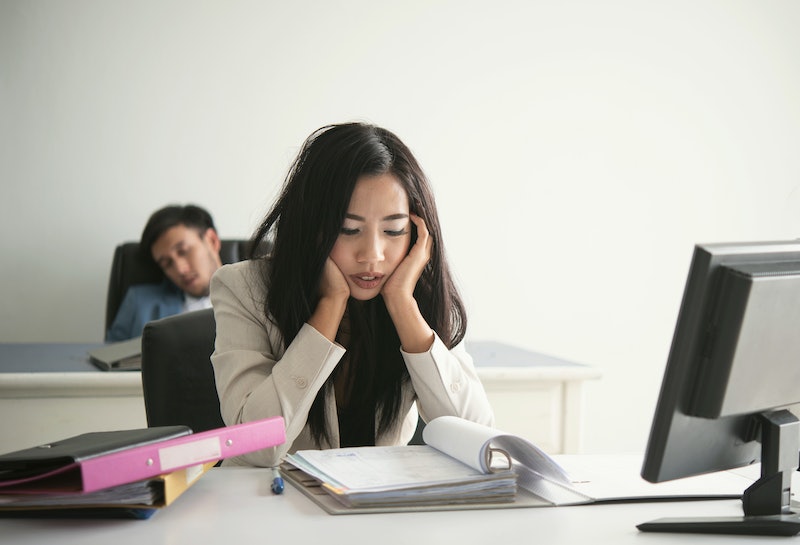 It doesn’t matter if you’re doing your dream job, everyone has off days. Whether you’re a little bit overtired or have been working on a project that isn't sparking a lot of inspiration in you sometimes it’s hard to get up and go to work. However, for some people things are more serious than that. In fact a new poll has revealed that one third of workers feel their job is soul-destroying. The study which was commissioned by the Open Study College found that a high proportion of people clock watch to get through the day and that some feel a lack of qualifications is the reason they aren’t progressing.

Samantha Rutter, CEO at Open Study College, commissioned the poll of 2000 working adults in the UK and the findings are pretty damning of UK workplaces. Sixty percent of respondents said they had no plans for progression in their current role and 30 percent said their job is “utterly dull.” A despondent 35 percent went so far to say that their work set up is “soul destroying.” That’s some seriously dissatisfied workers. As well as measuring how people felt about their jobs, the poll looked into the reasons as to why people might not be the happiest in their current roles and how to spot the signs that you’re no longer excited about work.

“We spend a huge amount of time at work so it’s important to be doing something you enjoy and get some satisfaction from,” Rutter told The Independent, “for some, picking up steady pay is enough to keep them coming back year after year.”

She continued: “But after a while, even a regular income seems to struggle to keep people engaged and excited about work. After all, you do hear about people with the most amazing and high-profile jobs getting disillusioned with their day-to-day lives.”

Twenty-five percent of those surveyed said they didn’t think they had anything left to learn or accomplish in their current role. But according to The Happiness Index, providing people with the opportunity for growth and encouraging people to get out of their comfort zones is a key way to ensure happiness at work. Scarily, 56 percent of those polled said they believed that if you have a dull job it makes you less interesting in day to day life.

So, what signs should you look out for to know whether you’ve fallen out of love with your work? Thirty-seven percent of people pointed to struggling to get out of bed in the morning as being a clear sign you’re not so hot on your job, meanwhile others said if you’re doing a job purely for the money, or if you're pointed to clock watching, then your job may not be working for you. A massive 47 percent of dissatisfied workers admitted to watching the day go by to get them through and the study estimated that a bored Brit at work mentally checks out at 12:46 p.m.

Rutter said, “there are lots of other things you can try if you feel like you’re stagnating at your current role. Employers like it when workers are actively looking to better themselves, it not only benefits the business but is also a great confidence builder for employees to progress.”

Speaking to Forbes, work coach Gia Ganesh suggests learning new skills or going on training courses when the honeymoon period with your job comes to an end. Speaking to the same publication Cheryl Lynch Simpson, executive of Resume Rescue, recommends you take some time out to remind yourself of what your career goals are, both in the near and distant future. Speaking to the BBC, leadership coach and author Scott Elbin advised setting small attainable goals to help you get your spark back. While it's unrealistic to be 100 percent enthusiastic about work constantly, when you spend so much time at work you want to feel good about it.

More like this
TikTok Has A Genius Old School Hack For Saving Money
By Sophie McEvoy
Here’s Where The NHS Nurses’ Strike Currently Stands
By Sophie McEvoy
Twitter Has *A Lot* To Say About The "Single Penalty”
By Sam Ramsden
Siva Kaneswaran's Net Worth Shows The Value In Chasing The Sun
By Bustle UK
Get The Very Best Of Bustle/UK
Sign up for Bustle UK's twice-weekly newsletter, featuring the latest must-watch TV, moving personal stories, and expert advice on the hottest viral buys.