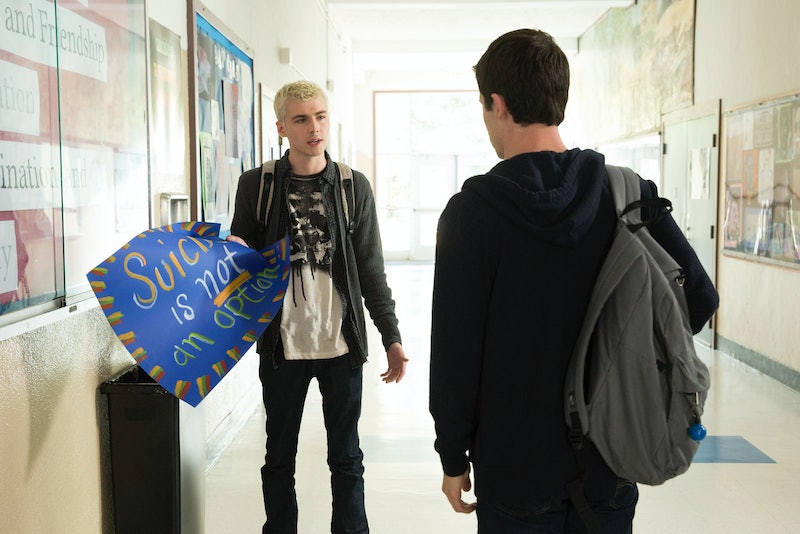 13 Reasons Why can be very difficult to watch. Netflix's adaptation of the YA book by Jay Asher follows the fallout after high school student Hannah Baker kills herself. The show is unflinching in its depiction of the slut shaming, bullying, and sexual assault that led to Hannah's death, and of the ripple effects her suicide has throughout the high school. It also includes a very graphic suicide scene. Despite the sensitive subject matter, 13 Reasons Why doesn't provide resources in its episodes for viewers who might be feeling depressed or suicidal themselves.

13 Reasons Why has been deservedly lauded as a rare accurate depiction of cyber bullying, sexual assault, and suicide, which makes its lack of resources all the more troubling. To the show's credit, three of the more graphic episodes are preceded by warnings, so anybody who might be triggered by sexual assault or suicide can choose not to watch those scenes. Netflix also produced an accompanying special, 13 Reasons Why: Beyond The Reasons, which focuses on the issues the show addresses, features mental health experts, and provides resources.

However, following two very graphic rape scenes and one suicide scene that shows Hannah slitting her wrists in the bathtub, there are no resources provided in the series' episodes, not even the number of the National Suicide Prevention Hotline — which is 1-800-273-8255. One might argue that the lack of resources at the end of each episode helps the show avoid feeling like an after school special, but the portrayal of such real issues should be accompanied by real outlets for help.

Bustle reached out to Netflix about the lack of resources and they responded by detailing the following action items to address the subject matter:

"From the onset of work on 13 Reasons Why, we have been mindful both of the show's intense themes and the intended audience. We are proud to be a platform that can portray these undoubtedly tough issues for young adults with complete (uncensored) authenticity, while not negating the serious nature of the subject matter. During production, our executive producers consulted with several mental health professionals who helped guide their storytelling approach to suicide, sexual assault and bullying.

On the service, all 13 episodes of the series garnered an appropriate rating of TV-MA and episodes 9, 12 and 13 — containing the more explicit material — featured specific warning[s] prior to the beginning of the episode. In addition, immediately preceding the series on the service is a 30 minute After Show that delves deeper into the tougher topics portrayed. Beginning at midnight on launch day, 13ReasonsWhy.info went live and will direct viewers from our After Show to mental health resources appropriate for each region where the show is available."

13 Reasons Why: Beyond the Reasons includes conversations with actors, producers, and mental health professionals, and provides the address of the series' crisis information website, as does the show's official Twitter page. But even with these efforts, resources should have been given at the end of the actual episodes.

Though Netflix has a wide audience and 13 Reasons Why has a TV-MA rating (mature audiences only), it's fair to say that the creators intended to make something that spoke to the teenage experience and that teenage audiences could relate to. And, as the series shows in great detail, young adults don't always know how to get help, which is why the resources should be easily accessible, not something viewers have to go looking for, the way they do for 13 Reasons Why: Beyond the Reasons.

The special is its own separate title on Netflix, which will play automatically a few seconds after viewers watch the final episode of 13 Reasons Why. That means it isn't found under the same banner as the other episodes, and if viewers stop the finale before the credits roll and a countdown begins, they may not find Beyond the Reasons. And because it only autoplays after the final episode, audiences don't see those resources until they've watched the entire season, which contains sensitive subject matter throughout its run.

It's so important to show 13 Reasons Why viewers that there are places to turn when they need help, because Hannah struggles to find resources. She doesn't tell her parents what's going on because she seems to think she'll burden them, her friends are no longer her friends, and turning to a hotline or website doesn't even seem to be on her radar. When she finally finds someone who could potentially help, school counselor Mr. Porter, he handles the situation terribly and becomes her final reason for ending her life. The entire series, and especially her plea for help from Mr. Porter, prove that Hannah's suicide could and should have been prevented.

That's one of the main lessons of 13 Reasons Why: death by suicide is preventable. This is why not immediately providing a teenage audience with any tools to grapple with the issues depicted seems counterintuitive to the very point of the show. Hannah died because she didn't know how to get help, and she's not the only one who didn't know where to turn. Her death and its ramifications appear to lead directly to Alex, one of her former best friends, shooting himself in the head.

The idea of suicide clusters briefly mentioned in the show refers to the phenomenon of contagious suicide, or what happens when one person's suicide inspires another. Alex's attempted suicide (he remains in critical condition at the end of the season) is an example of this phenomenon, and it raises the question: knowing what he did about Hannah's death, why didn't he get help? Was it because he felt there were no resources available to him either?

This is why 13 Reasons Why needed to make resources available in the most direct way possible, to show that there are places and people that can help those who are struggling. Having a title card at the end of each episode (or, at the very least, the last episode) with resources would have been the easiest way to get that information across. Instead, viewers have to go looking for them.

The very premise of 13 Reasons Why can be triggering. It's important for viewers to take care of themselves, be aware, and know that they don't have to watch every scene or episode if they think it might do them harm. For any viewers who feel depressed or at risk, call the National Suicide Prevention Hotline at 1-800-273-8255, or go to their website, suicidepreventionlifeline.org.

More like this
9 Films About Mental Health To Watch On Netflix UK
By L'Oréal Blackett and Sophie McEvoy
What’s New On Netflix: 'Stranger Things' & 'Somebody Feed Phil' Return
By Arya Roshanian
'Ghost In The Shell: SAC_2045' Was Only Supposed To Last Two Seasons
By Kadin Burnett
Michael Peterson & Sophie Brunet’s Relationship Timeline
By Morgan Leigh Davies
Get Even More From Bustle — Sign Up For The Newsletter