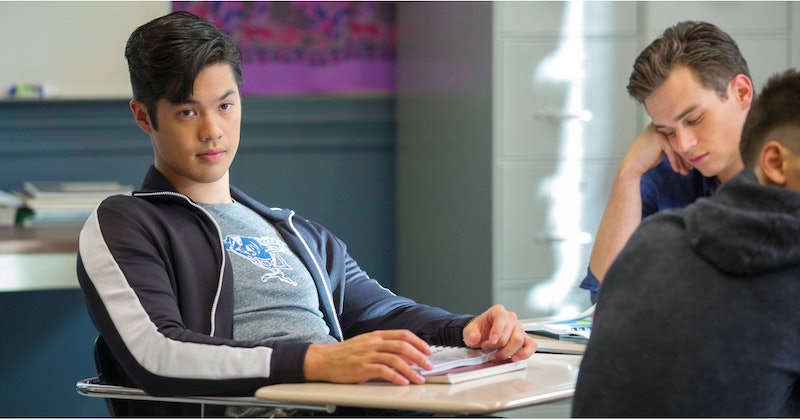 Spoilers ahead for 13 Reasons Why Season 2 Episode 6.

If you thought Zach Dempsey's treatment of Hannah Baker was disappointing in the first season of 13 Reasons Why, he isn't coming off of Season 2 looking much better. In fact, one of the biggest twists of 13 Reasons Why Season 2 is the revelation that Zach and Hannah lost their virginities to each other before she committed suicide, and that they had a serious, committed relationship throughout the entire summer. It was sweet, it was genuine... and Zach kept it a complete secret from his friends and family the entire time. Ugh, Zach.

As the poster child for the negative effects of toxic masculinity personified, Zach's fear of not fitting in with his so-called friends was taken to new heights this season. Ending his relationship with Hannah before school started in the fall just because his friends were all back in town was a cowardly move, especially since it was so clear that neither of them wanted to break up. Now, looking back at Zach's behavior in the first season, it's so much clearer why Hannah's death hit him so hard — he felt a lot more blame, shame, and regret than anyone even realized.

But now that he's testified in the court case against the school and revealed the truth about his history with Hannah, it's all out in the open. Zach is no longer hiding his real feelings or worrying about fitting in. Could this be the spark that finally inspires Zach to do the right thing, especially when it comes to his "friend," accused rapist Bryce?

Bustle sat down with Butler to break down this huge Zach/Hannah twist. While the actor didn't know about their secret shared history during the first season, he knew exactly what was coming in Season 2.

"Going into this season, I knew about it because I had lunch with [showrunner] Brian Yorkey before and he told me and gave me the lowdown," Butler says. "But Season 1 I had no idea. It made sense, it felt organic and real. And if you go back and watch it, the timeline all works out."

While Zach has so much potential when it comes to sticking up for his bullied peers at Liberty High, his continued silence in the face of injustice gets increasingly frustrating throughout the series. He's a part of the "cool," popular jock clique, he's well-liked, and could enact major change in the social hierarchy and dynamics at the school. And yet he tolerates the problematic behavior of his "friends," which includes bullying and covering up serial sexual assault and harassment. Now that it's been revealed that he and Hannah were in a relationship together and he truly cared about her, his decision to ignore her getting bullied and harassed by his own friends is even more appalling.

Now that Butler knows about Zach and Hannah's relationship, the revelation has completely colored his opinion of his character's behavior towards Hannah in the first season. "Yeah, it made me a little bit more disappointed in Zach," he says with a sigh. "As far as he had yet another chance to do something and he was even more emotionally involved with her to where he could have been motivated to do something more and he didn't."

As no longer just an innocent bystander now that viewers know how close Zach was with Hannah before she died, it turns out that he is a lot more complicit in the bullying she suffered than anyone realized. Butler hopes fans can watch Zach and learn some valuable lessons from his behavior and hopefully prevent a situation like this from happening in real life.

"My biggest thing is, growing up or just in life in general, we feel like we need to belong to a certain clique or we need to fall within certain expectations of us because of this identity that's been predetermined just by who we hang out with," he says. "Especially with teenagers. So don't feel like you need to go with the flow. If you feel a certain way, act on it. Don't change who you are because you think your friends are going to like you less. If anything, your friends should like you more for having opinions."

Butler is proud to be on a series that young people can watch and recognize in themselves patterns of behavior that are potentially problematic. "The No. 1 thing I want people to take from watching Zach is, I see that as a cautionary tale," he adds. "Stand up for what you believe in." If only Zach could have heeded Butler's advice.