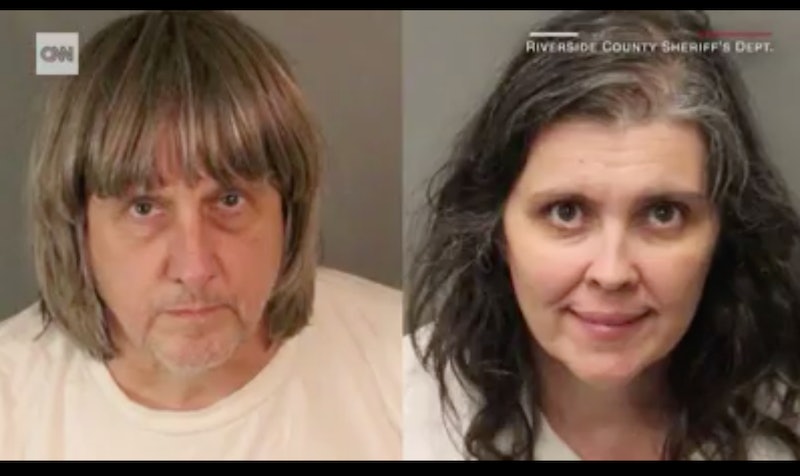 On Monday, the Riverside County Sheriff's Department in California revealed it had arrested a couple after allegedly finding their children handcuffed to their beds. David Allen Turpin, 57, and Louise Anna Turpin, 49, are being held on charges related to the alleged incident and have not commented on the situation.

According to Buzzfeed, police were alerted to the situation after receiving a 911 call from a 17-year-old girl who said she had escaped from the house. The girl reportedly escaped on Sunday morning and called 911 with a cell phone, informing the operator that her siblings were allegedly being held against their will, with some "bound with chains and padlocks."

The Sheriff's Department press release reported that police briefly met with the girl before heading to the family home. Police were reportedly surprised by the girl's appearance, as they noted that, instead of looking 17, she "appeared to be only 10 years old and slightly emaciated."

KTLA 5 News reported that, when police entered the couple's home, they reportedly discovered many children confined in the residence. According to the the Sheriff's Department press release, there were allegedly "several children shackled to their beds with chains and padlocks in dark and foul-smelling surroundings." The release also noted that officers thought they had found 12 children inside the home, with seven of the 12 individuals discovered to be adults; the ages of the children range from 2 to 29 years old.

The release said that when officers confronted the Turpins about the state of the children in the home, they were reportedly unable to provide any type of explanation as to why the children were in chains. The couple were interviewed further by police and eventually each was charged with torture and child endangerment. They are currently being held at the Robert Presley Detention Center on $9 million bail, each.

The Los Angeles Times reported that some who knew the couple were surprised by the allegations against them. Ivan Trahan, an attorney who represented the Turpins during a 2011 bankruptcy case, expressed his disbelief to the paper.

To me and my wife, Nancy, who was with me during the interviews, we always thought of them as very nice people who spoke highly of their children. ... They seemed like very normal people who fell into financial problems.

Kimberly Milligan, a neighbor, had less interaction with the couple, despite living nearby. She told the paper that she found several things about the family strange and also noted that the children always seemed pale — something which other neighbors pointed out as well. She further noted that she was surprised that the children did not come out to play more, but added:

I thought the kids were home-schooled ... You know something is off, but you don't want to think bad of people.

Milligan similarly expressed shock at the charges against the couple, finding it particularly jarring that no one in the neighborhood had noticed anything amiss.

"We're not acres apart," she said. "How did no one see anything?"