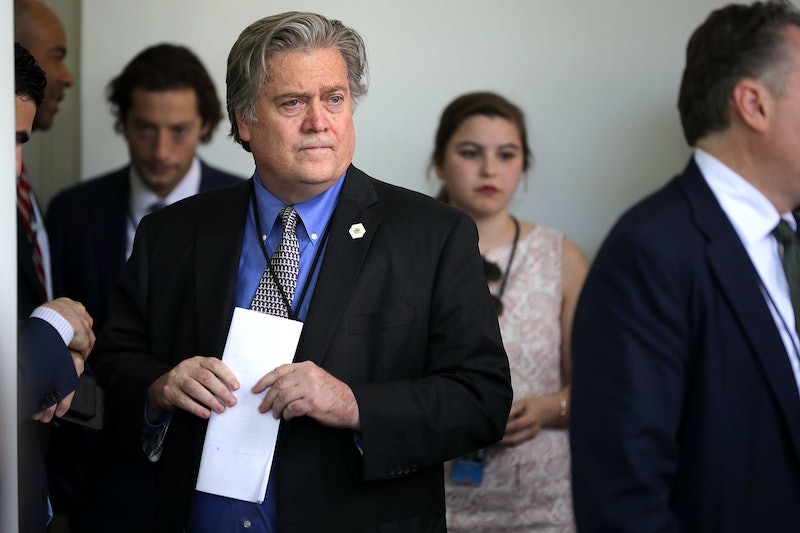 On Friday, the White House announced that senior presidential advisor Steve Bannon is leaving the Trump administration after seven months on the job. The former chief of an "alt-right" news site, Bannon had become a lightening rod for criticism in the Trump administration, both before and after the recent neo-Nazi rally in Charlottesville, Virginia. But these quotes from Bannon show that he shouldn't have been hired to work in the White House to begin with.

Prior to joining Trump's campaign (and later, the White House), Bannon was the executive chair of Breitbart, a conservative news website that's published several factually-incorrect and sometimes intentionally misleading articles since its founding in 2007. Under Bannon's tenure, the website veered into far-right bigotry, with headlines declaring that "there's no hiring bias against women in tech, they just suck at interviews," referring to an anti-Trump conservative as "renegade Jew" and asserting that "gay rights have made us dumber."

Those headlines are disqualifying enough on their own for anybody seeking to work in the White House, and yet many of Bannon's own statements are just as incendiary, if not moreso. Here are some of the worst things Bannon has said over the years — quotes that deemed him unacceptable for government employment from day one.

I’m a Leninist. Lenin wanted to destroy the state, and that’s my goal too. I want to bring everything crashing down, and destroy all of today’s establishment.

3. On Police Violence Against Black Americans

What if the people getting shot by the cops did things to deserve it? There are, after all, in this world, some people who are naturally aggressive and violent.

Cities like Richmond and Baltimore and Philadelphia have black mayors, have black city councils, have black police commissioners. How can it be systemically racist if these men and women today are actually in control of the city?

The women that would lead this country would be pro-family, they would have husbands, they would love their children. They wouldn't be a bunch of dykes that came from the Seven Sisters schools up in New England. That drives the left insane and that's why they hate [conservative] women."

6. On The Refugee Crisis

It’s been almost a Camp of the Saints invasion into Central and Western and then Northern Europe.

This requires some context: Camp of the Saints is a hideously racist book that depicts non-white immigrants as malicious and subhuman invaders out to destroy white culture. Here's more about it.

I am not about to have a twenty-nine-year-old bimbo criticize the people at this place for running something.

Bannon was referring to a 34-year-old colleague who disagreed with him.

Fear is a good thing. Fear is going to lead you to action.

10. On A Potential Hillary Clinton Presidency

Our backup strategy is to f*ck [Clinton] up so bad that she can’t govern. If she gets 43 percent of the vote, she can’t claim a mandate.

When two-thirds or three-quarters of the CEOs in Silicon Valley are from South Asia or from Asia, I think... A country is more than an economy. We’re a civic society.

Bannon's ex-wife said this during the couple's divorce trial. Bannon denies having said it.

As should be clear right now, no president — Trump or otherwise — should have hired Bannon to work in the White House, or indeed any branch of government.