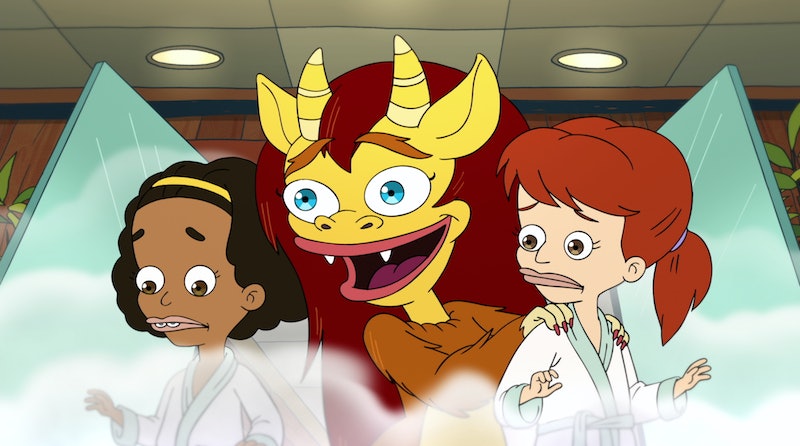 For some reason, one of the very basic functions of the human body still remains taboo to even joke about in polite company, probably because it happens primarily to women. Most people with a uterus get their period and still, you rarely see periods depicted on TV, in movies, or talked about in public, while other bodily functions like pooping get entire television series built around them. Menstruation and all the issues that go along with it have, like many "women's health" issues, been uncomfortable topics of conversation for men and by extension, women, who have been taught to literally hide the fact that they get their period. A lot of that has to do with representation in pop culture.

Dr. Lauren Rosewarne, author of Periods In Pop Culture, tells Bustle via email that media representations of menstruation can help fight period stigma. But it also perpetuates it. "Film and TV provides an informal - and ongoing - education on a range of topics. While education is not it's primary function, nonetheless, we still glean information from it. This means that if we're going to get an informal education on menstruation from the screen, ideally it should not only reflect the drama of it all, but notably also the thorough ordinariness in which most women experience it," she says.

Some earlier period episodes perpetuate stigma or dangerous gender stereotypes, such as dads who "just can't (or won't) understand" their daughters or that menstruation is something to be embarrassed about. But it's been getting so much better, thanks to the sheer quantity of TV these days and more women, from all walks of life, in writing rooms.

Rosewarne says that the rise of cable TV and streaming services has "led to a greatly flexibility about what content is shown: audiences have validated their acceptance of - if not enjoyment for - more risqué content by continuing to pay for such services." She adds that this has led to not just more depictions, but conversations about menstruation. Below, you'll find 13 TV episodes that have contributed greatly to that conversation and paved the way for more to come.

More like this
The 'Bachelor In Paradise' Schedule Shifts To 4 Hours Every Week After The Season 8 Premiere
By Brad Witter
Everything To Know About 'RHOA' Season 15
By Gretchen Smail
You Can “Fall In Love” At The Resort Where Bachelor In Paradise Season 8 Was Filmed
By Brad Witter
Mike Flanagan Teases 'The Midnight Club' In This Exclusive, Creepy Clip
By Grace Wehniainen
Get Even More From Bustle — Sign Up For The Newsletter