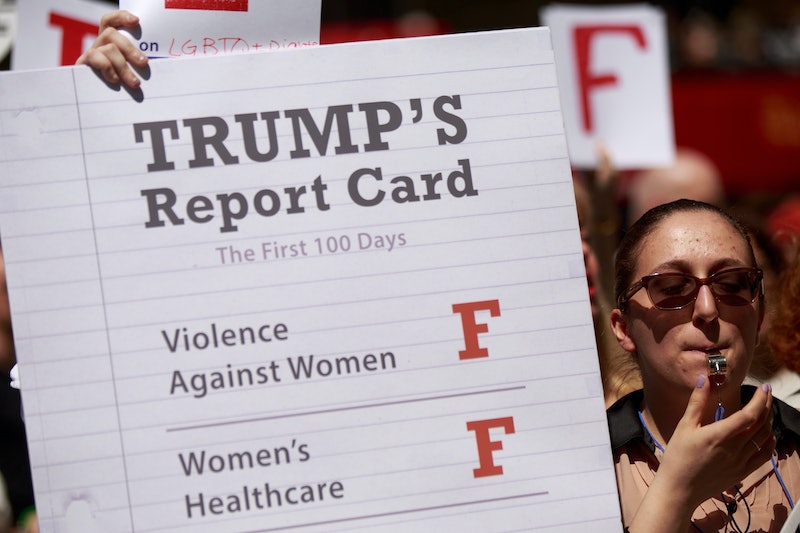 It's officially been 100 days since Donald Trump took the inauguration oath and became President Trump. Unsurprisingly Trump's first 100 days have been terrible for women and their rights. After all, it's an administration led by a man who, before winning the election, was caught on tape bragging about grabbing women's genitals without permission (he denied acting on the comments) and regularly insulted women's looks, among other things.

America has seen budget proposals slashing funds to programs working to help domestic violence victims and provide affordable childcare and child nutrition options. Men who openly resent feminism — like Steve Bannon, who once referred to feminists as "a bunch of dykes" in a radio interview, and Stephen Miller, who wrote an article rejecting the notion of a gender pay gap and titled it "Sorry feminists" — have been given high positions in government. Women's health has taken hit after hit, particularly when it comes to reproductive rights.

While it may be upsetting to read, it's important to remember the challenges the current administration is posing and to use the bad news as motivation to keep pushing back. Here are just a few ways life has gotten harder for American women since Trump took office.

1. The Global Gag Rule Was Reinstated

One of Trump's first actions as president was to reinstate the Mexico City Policy, or the "global gag rule," a law that prohibits U.S. federal funds from going to certain non-governmental organizations based in foreign countries. The law dictates that organizations that even mention abortion as a family-planning option, regardless of whether the organization provides the procedure itself, cannot receive financial support from the U.S. government.

2. An Anti-Feminist Was Hired To Work On Women's Issues

Stephen Miller, a senior adviser to President Trump with a history of dismissing the pay gap between men and women, defending gender roles, and criticizing paid maternity leave, was hired to work on women's issues alongside Ivanka Trump.

Apparently under the impression that if someone is nice to him they can't be guilty of sexual harassment, President Trump defended Bill O'Reilly against accusations that he sexually and verbally harassed five women (O'Reilly denies the allegations). "I think he's a person I know well — he is a good person," he told the New York Times. "I think he shouldn't have settled; personally I think he shouldn't have settled. Because you should have taken it all the way. I don't think Bill did anything wrong." O'Reilly was ousted by the Fox News Network in late April and denies the allegations against him, calling them completely unfounded.

On March 27, the president signed an executive order undoing former President Obama's 2014 Fair Pay and Safe Workplaces mandate, which aimed to make sure that contractors conducting business with the federal government adhered to 14 civil rights laws. Included in these laws were measures meant to ensure that sexual harassment or sexual assault claims be arbitrated only with the consent of employees involved, as well as equal pay between genders.

In March, Vice President Pence cast a tie-breaking vote in the Senate allowing a bill giving states the right to withhold funds from Planned Parenthood to move forward. Two weeks ago, while most of the world had its attention fixed on Trump authorizing the bombing of Afghanistan with the "Mother of all Bombs," the president privately signed the bill into law.

6. Ivanka Trump Somehow Got Touted As A Feminist

Because she reportedly leans on the liberal side of social issues, a plethora of articles suggested that Ivanka is secretly progressive and a feminist who will push her father more toward the left. But elevating a woman who excuses her father's long list of anti-woman policies and stances is not right. She's even gone as far as to declare him a "feminist" — and thus far, she's only served to distract the public from the Trump administration's plans to attack women's rights.

7. The White House Got Even More Male & White

Neither women nor people of color have much presence in Trump's inner circle. According to an analysis by the New York Times, the current president's cabinet is the most white and male since Reagan's administration. With hardly any of his cabinet members having the personal experience of being a woman, the chances that decisions regarding women's healthcare, paid maternity leave, the wage gap, sexual assault, harassment against women, and other female-related issues will be approached from a non-male-centered perspective are very low.

8. Reproductive Rights Became A Point Of Contention For Democrats

Desperate to get their party on a better track after losing all three branches of government to Republicans, Sen. Bernie Sanders and DNC Chair Tom Perez recently kickstarted a "unity tour," which ironically started off by dividing the party over abortion rights. Sanders endorsed and campaigned with pro-life Democrat Heath Mello and subsequently responded to criticism by suggesting that he's willing to put aside his disagreement with pro-life colleagues in order to achieve other goals. Perez made a similar statement when he said that support of reproductive rights would not be a litmus test for Democrats.

Perez later backtracked and insisted that all Democrats must support abortion, but he was later publicly contradicted by House Minority Leader Nancy Pelosi and Sen. Elizabeth Warren. The fact that reproductive rights has become a point of division within the party is definitely bad news for women, who oftentimes look to the Democratic Party to defend their reproductive rights.

Having a Supreme Court justice with views as conservative as Gorsuch's are on women's rights is another blow for the American female population.

The budget proposal Trump released in March included a $200 million cut to the Special Supplemental Nutrition Program for Women, Infants, and Children (WIC). Roughly 7.8 million women and children living under the poverty line were aided by the program in just the first three months of the 2016 fiscal year. Slashing these funds from a program that already struggles to provide for its caseload will only result in more starving women and children.

11. Maternity Coverage Was Put In Danger

Trump picked Seema Verma, who believes insurers should have the option of whether or not they want to cover maternity and newborn care, as the administrator of the Centers for Medicare and Medicaid Services by the Senate.

Numerous government posts dedicated to different women's issues, such as the global women’s issues ambassador in the State Department, have yet to be filled by the Trump administration.

Motivated to resist Trump? Check out this guide to see how you can take action.