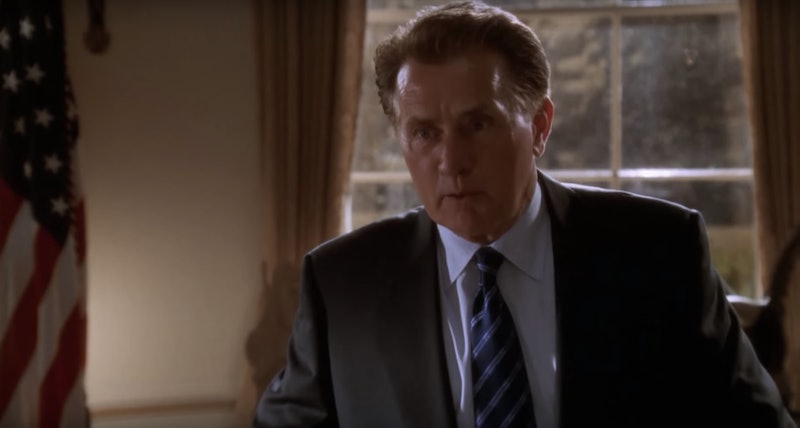 When you're working with a show that's as close to technically perfect as The West Wing was, is, and always will be, it's tempting to choose every episode as your favorite. Still, there are some that rise above the rest. I'm talking about the West Wing moments no true fan will ever forget; the ones that keep you up at night, that you find yourself re-watching in moments of need, and paraphrasing to your friends when they come to you for advice. ("OK, so I think you need to establish some boundaries, like when Donna Moss quit working for Josh Lyman when he wasn't taking her seriously enough.")

Some are comedic, some are dramatic, some are heart-wrenching, some are heart-warming, and most of them are some Aaron Sorkin-y combination of the above. Regardless, they're all built to stand the test of time, and clearly already have, as I'm still thinking about them over a decade after the show wrapped up its seventh season and went off the air. The show wormed its way into my head and my heart, and here are the 13 moments that did most of the work. If you can get through this list without feeling 13 pangs of emotion right in your gut, then I regret to inform you that you aren't a true fan... or maybe it's just time for another watch, because these are classic West Wing moments.

Can you imagine a better introduction to a character like C.J. Cregg than watching her swig beer and lip-sync to the Ronny Jordan song "The Jackal" in Season 1, Episode 18? I'll answer that for you: no, you cannot. Allison Janney is queen, and this is proof.

2. When The Assassination Attempt Happens

All the episodes surrounding the attack on Charlie Young — and more indirectly, President Bartlet and the rest of his team — were extraordinarily well done, but I was particularly impressed by the way the Season 2 premiere was handled. It juxtaposed the drama of the event itself with the way I'd imagine an actual presidential team would handle an assassination attempt, and the imagery has really stayed with me.

3. When Josh Deals With PTSD

A lot of shows have a tendency to drop a big bomb in a finale episode, wrap it up neatly in the premiere of the next season, and never address it again, but The West Wing is not a lot of shows. Even though Josh survived the attack, he sustained intense emotional damage. And the fact that the plot stayed with him through the process of denying he was struggling, being confronted with his distress, and finally accepting help from those around him was as important as it was powerful.

4. When They Cross Time Zones

One of the things I love most about The West Wing is Sorkin and the rest of the writers' willingness to make their characters fallible. When Toby Ziegler, Donna Moss, and Josh get stranded in Indiana after missing the motorcade in the Season 4 premiere, "20 Hours In America (Part I)," they talk to some everyday Americans and gain realizations about why their campaign isn't hitting and how they can adjust it to really serve the needs of the public. It's one of those moments that you feel like real-life politics could take some hints from.

This has been a lot of drama all in a row, but the show nails humorous moments too, like when C.J. gets a root canal and cannot — literally cannot — do the briefing.

6. When Josh & Donna Finally Hook Up

Never has there ever been a more satisfying end to a will-they-won't-they than that long-awaited kiss between Josh and Donna. The timing is off for entire seasons, and even after they first hook up, Donna has to lay down the law a few times, because Josh is an idiot. But their eventual union is well worth the wait.

7. When President Bartlet Gives The Knife To Charlie

No big deal, just a knife made by a little known silversmith named Paul Revere that Jed Bartlet's father gave to him and that he passes on to Charlie Young in Season 2, Episode 8. I'm not crying, you're crying.

8. When Toby Buys The House For Andy

Speaking of impressive gestures, the one where Toby buys his ex-wife, Andy, a house in hopes that they can move back in and raise the twins together — only to be turned down — is the mother of all gut punches. Such impressive acting, such intelligent writing, and so true and brave and real not to have them get back together after the birth of the babies and the traumatic event of the abduction of Zoey Bartlet, even though that's how most shows would write it.

The string of episodes leading up to C.J.'s appointment as the White House Chief of Staff is cleverly arranged to make it seem like it will come down to Josh or Toby, who are both vying for the position, so it's both a surprise and intensely satisfying when it goes to C.J.

If you ever want to see me weep like a child, just say the phrase, "She put the pen in your pocket," and watch my eyes fill up. I very legitimately had to take some time away from the show after President Bartlet's secretary and longtime friend, Dolores Landingham, was struck and killed by a drunk driver. I truly don't think I'll ever be over it.

The West Wing really was more than just a show, and after the 9/11 terrorist attacks, they seemed to feel a responsibility to cover this moment. Knowing the eyes of the nation were on them, the writers pulled together an introduction to Season 3 called "Isaac and Ishmael" that spoke to the attacks and the fears of the American people in equal measure.

12. When President Bartlet's MS Is Revealed

Once again, the writers allowed one of their characters to be wrong in a big way, and for another character to call him on it. President Bartlet went to great illegal lengths to conceal his MS diagnosis from the American people, and Toby very rightly spoke for them as he explained to the Commander-in-Chief why this was unacceptable.

13. When Leo McGarry Gets A Tribute Episode

When the actor who played Leo McGarry on the show, John Spencer, died in real life in 2005, he had already filmed several episodes, which the show aired. They capped off with a tribute episode in which the character passes away as well, and he's mourned by the entire cast. It's as heartbreaking as it is beautifully done.

And with that, I'm pretty sure I need to go lie down, because this is quite the emotional journey to have gone on all at once. West Wing, you still got it, and I'm pretty sure you always will.