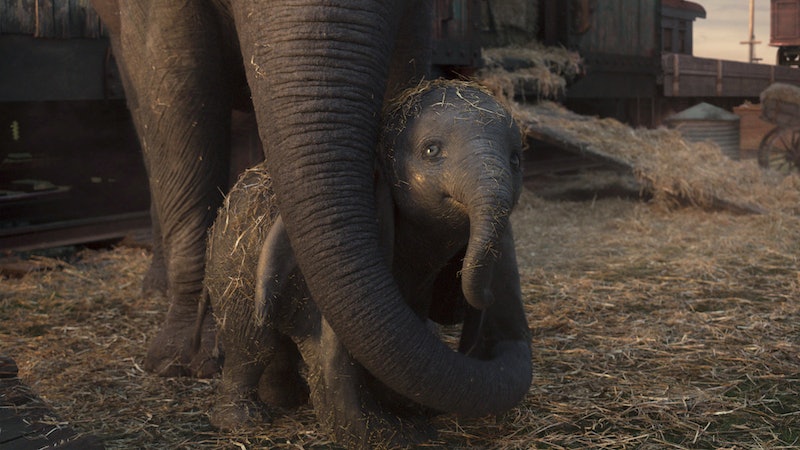 The House of Mouse continues its trend of making live-action editions of its hit animated classics this week with the release of Disney's new Dumbo on March 29. As an elephant enthusiast myself, I can't wait to check it out, for one thing I'm curious how they're going to adapt some of the original animated film's distasteful elements, such as the animal cruelty, and the racist undertones. I don't have to feel conflicted about the wellbeing of the animals in this Dumbo, at least — all of them are CGI. But I'm also eager to see how goth-master Tim Burton puts his signature twisted take on a family-friendly story about a cute baby elephant with gigantic ears.

If you're anything like me, you make a habit out of heading over to YouTube to watch adorable baby elephants fall over their trunks or take splashy baths. But thankfully there are also more cinematic ways of getting our elephant fix. So before you can make it to the theater for what is quite possibly the most popular elephant in pop culture, you may want to check out one of more of these elephant-centric movies.

The list below offers up some movies streaming now that feature our favorite creature. From serious dramas to ridiculous comedies to informative documentaries, here are 14 movies featuring elephants for a good pachyderm kick.

This 2011 circus-set love story stars Robert Pattinson as a veterinary student who takes a job caring for the animals of a traveling circus, including the lovable elephant Rosie. Reese Witherspoon co-stars as a performer whose cruel husband owns the circus. Not only does this movie feature an amazing elephant, but it's also a rare cinematic example of a romance between an older woman and a younger man.

Streaming on Netflix, Amazon, and iTunes.

Operation Dumbo Drop is one of those 1990s movies that seems so ludicrous today but is still wildly entertaining. Danny Glover, Denis Leary, and Ray Liotta star as members of the U.S. Army during the Vietnam War who are tasked with providing a village with an elephant for one of their most sacred rituals. The only problem is they have to airlift the pachyderm into the village.

Streaming on HBO, Vudu, and iTunes.

3. The Prince And Me: The Elephant Adventure

This 2010 rom-com is the fourth installment in the Prince and Me series, which began with the 2004 Julia Stiles movie. In this direct-to-VOD sequel, Paige (Kam Heskin), now a queen, and her King Edvard (Chris Geere), attend the arranged marriage of the princess of Sangyoon, a very India-like country invented for the movie. But the princess is secretly in love with the handler of the elephant that will be used for her wedding ceremony.

Larger Than Life is another one of those ridiculous '90s comedies, but this one has the added value of Bill Murray. Murray stars as a business man named Jack who inherits an elephant named Vera from his dead father. In order to provide Vera with a better life in Sri Lanka, Jack has to get her across country, and of course, shenanigans ensue.

5. Love And Bananas: An Elephant Story

This 2018 documentary by actor/director Ashley Bell travels to Thailand, where elephant rescues are a dangerous operation. The doc follows Lek Chailert, founder of Thailand's Elephant Nature Park, where elephants from riding farms, circuses, and captivity across the country live in a sanctuary after being rescued. But the doc's real star is a 70-year-old blind elephant named Noi Na.

Streaming on Starz and iTunes.

There was an animal movie trend in the '90s that saw famous actors voicing anthropomorphized live action animals to tell stories. Movies like Milo & Otis or Homeward Bound probably spring to mind first. Whispers is another one of those, with actors like Angela Bassett, Joan Rivers, and Betty White voicing live elephants from real footage. It's a cute film, if not exactly a documentary or a fully fictional piece.

7. An Apology To Elephants

This 2013 HBO original documentary explores the reality of the elephant entertainment industry around the world. Narrated by Lily Tomlin and directed by Amy Schatz, An Apology to Elephants will make you second-guess the circus.

Streaming on HBO and Amazon Prime.

8. When Elephants Were Young

Narrated by Captain Kirk himself, William Shatner, this 2016 Canadian documentary also heads to Thailand and follows a 26-year-old man named Wok who's had his elephant, Nog Mai, since she was 3. The doc explores traditional mahout (elephant trainer) relationships that have been around for hundreds of years, the dwindling elephant tourism industry in Asia, and Wok's quest to set Nog Mai free.

An old classic, 1954's Elephant Walk stars Elizabeth Taylor as Ruth, a woman who marries into a family that owns a plantation that was built across an elephant herd's natural path to water. The herd still attempts to access their water source through Ruth's new home as she learns the dark secrets about the plantation and her new family.

Whether you enjoy the 1967 animated version or the recent 2016 live-action adaptation directed by John Favreau, both Jungle Book movies have awesome elephants. The animated version has the advantage of having elephants more involved in the story, as the ones in the live-action movie are more mysterious and revered.

Here's another example where you can opt for an animated tale or a live-action version. The 1999 Disney animated version of Tarzan features Tantor, Tarzan's elephant friend, plus the sweet stylings of Phil Collins. 2016's The Legend of Tarzan has fewer elephants interactions, but more shirtless Alexander Skarsgård, which is always a plus.

The Legend of Tarzan is streaming on iTunes and Vudu; Tarzan on Netflix.

And of course, we wouldn't have the new Disney live-action movie without the original 1941 Dumbo. And if you're miss Timothy the mouse from the new film, behold his tiny cuteness in the animated version.

Elephants make the best movie stars, and these movies prove it.