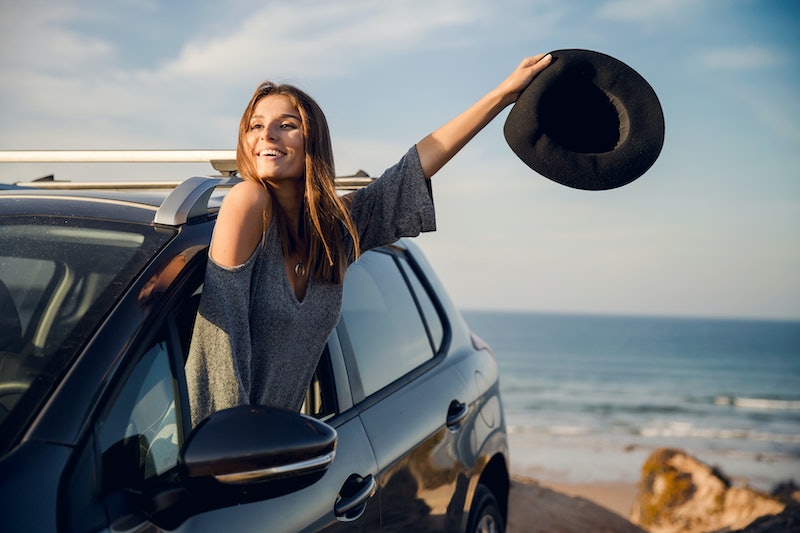 When it comes to Valentine's Day, women are often conditioned to believe that, if they're single on the day of, they're meant to hate the holiday and everything it stands for. I'm talking the whole shebang: Women are taught that if they're, god forbid, single on Valentine's Day, all they're supposed to do is roll their eyes at happy couples, snark at lovey-dovey Instagram captions, and order enough takeout for dinner that their local Chinese spot gives them enough disposable silverware for two people — not to mention sob over a pint of ice cream over the fact that they don't have a significant other. Of course, it's fine to want a relationship, but for society to uphold a dated cliché that a relationship is all that women want sucks a lot. Shockingly (that's sarcasm), some women actually like being single, and are happy to own their single status on Valentine's Day! Just as it's totally OK to actually want a relationship, it's also OK to not — and for those who fall into the latter category, Valentine's Day can feel like a little bit of a drag when it rolls around every year. However, it doesn't have to: This year, to show off how proud you are about your lack of relationship status, take to social media and post one of these Instagram captions about being single and loving it on Valentine's Day. Not only do you get to post an awesome status, but you can pair it with a great photo that shows you enjoying single life as much as you do too, so it's a win-win.

While unfortunately, posting a status that proclaims how much you love being single probably won't completely make the barrage of sympathetic "don't worry, you'll find someone one day!" comments stop — not everyone follows you on Instagram, after all — it will make you feel awesome, and a lot of people will likely identify with it as well. Hey, there are a lot of people who prefer to be single, and they probably feel the same way you do about how single people are treated on Valentine's Day!

Below, you'll find a selection of captions from a variety of public figures that'll pair perfectly with any photo of you loving single life that you choose to post. Pick whichever you like the best — after all, there are no compromises when it's only you who has to decide.

"Being single is better than being in the wrong relationship." — Unknown

"If there's one thing I'm willing to bet on, it's myself." — Beyoncé

A woman is unstoppable after she realizes she deserves better." —Unknown

"Single is an opportunity to live life on your own terms and not apologize.” ― Mandy Hale

"Today, be the badass girl you were too lazy to be yesterday." — Christina Carlyle

"The most exciting, challenging, and significant relationship of all is the one you have with yourself.” — Carrie Bradshaw, Sex and the City

"I never found a companion that was so companionable than solitude." — Henry David Thoreau

"I celebrate myself and sing myself." — Walt Whitman

"If we seek paradise outside ourselves, we cannot have paradise in our hearts." — Thomas Merton

"Discover why you’re important, then refuse to settle for anyone who doesn’t completely agree." — Fisher Amelie

"You alone are enough. You have nothing to prove to anybody." — Maya Angelou