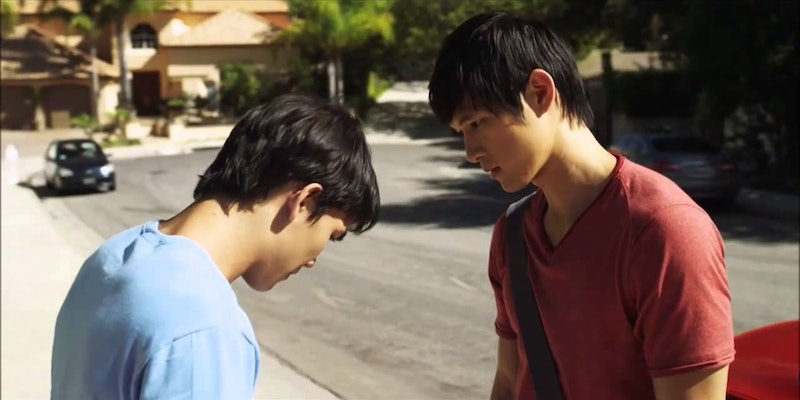 We all tend to look at films and documentaries to gain better understandings of issues and subject matters that we have little knowledge about. It's so important to see a variety of narratives tackled in the film industry, especially when it comes to mental health, disabilities, and other conditions that often are stigmatized. And with April being Autism Awareness Month, it's a good time to watch movies about autism in order to learn more about the condition and understand the experiences of autistic people.

According to the CDC, autism is the fastest-growing developmental condition in the U.S., and it couldn't be more important for all of us to educate ourselves on the matter. Of course, no one's experience is the same, and seeing a movie's representation of an autistic person doesn't mean that you suddenly know all there is to know about the condition. And similarly, autistic people and their families who know firsthand what it’s like to live with the condition may not see a reflection of their lives in these movies. However, movies that help educate audiences and work to destroy the stigma around autism are incredibly important, and deserve to be seen.

So, here are 14 of the most heartfelt, funny, and informative movies showing the different angles of autism, all of which I think you should watch.

1. The Story Of Luke

After his grandmother and caretaker passes away, Luke (Lou Taylor Pucci), a 25-year-old with autism, has to learn how to navigate through an unfamiliar world on his own. With determination, Luke sets out to find a job and fall in love. The Story of Luke is available to stream on Amazon.

Autism in Love follows the story of four adults with autism as they search for romance. These brave individuals take the viewer on a journey that will urge you to reevaluate your own ideals of what it means to love and what love looks like. You can stream Autism in Love on YouTube, Vudu and Amazon.

Fly Away is about a woman named Jeanne (Beth Broderick) and her relationship with her daughter, Mandy (Ashley Rickards), a teenager with autism. As Mandy gets older and her needs change, Jeanne works to reconcile her own goals for daughter with what is actually best for her growth. The movie is available to stream on YouTube, iTunes and Amazon.

4. The United States Of Autism

Seeking insight and answers for his son, a father travels 11,000 miles in a 40-day journey across America to interview individuals and families dealing with autism. The United States of Autism is available for to watch on Amazon, Vudu and iTunes.

Carla (Juliette Lewis) and her overprotective mother (Diane Keaton) have misgivings about her having independence and getting an apartment while pursuing a relationship. When I saw this movie as a child, I found it to be a great example of the idea that if you're determined to find independence, you can. The Other Sister is available on YouTube, iTunes, Amazon and Google Play.

This film shows the harsh reality that dozens of families face when living with autism. The constant struggle to find affordable lifetime care is the major concern for these parents featured in the movie. The documentary is available to stream on Google Play, iTunes and Amazon.

If you're a sap like me, this film will make you tear up. When Nick (BooBoo Stewart), who has Asperger’s syndrome, struggles to carry on after the death of his brother Chaz (Harry Shum Jr.), Chaz’s best friends take him under their wings to create a brotherhood. This moving drama/comedy is available to watch on iTunes, Amazon and Vudu.

A minor-league baseball team coach (Dean Cain) finds inspiration when he seeks a new small town pitcher Mickey Tussler (Luke William Schroder), who has Asperger’s. A Mile In His Shoes is available on Amazon, iTunes and YouTube.

Eric Gibb (Jay Underwood), a teenager with nonverbal autism, loves to stand on rooftops and window ledges, because he believes he can fly. His behavior alarms those around him, but when he saves his neighbor Milly (Lucy Deakins), from a deadly fall, everyone begins to wonder if he really can fly after all. The Boy Who Could Fly is available on iTunes, Vudu and Amazon

11. A Mother's Courage: Talking Back To Autism

This inspiring film follows one mother’s quest to know her autistic son’s mind. Margret has tried a number of treatments to help her son; she travels from her home in Iceland to the United States to meet scientists and health experts, as well as other families touched by autism, to learn more about the condition. The documentary is available on Amazon, iTunes and Vudu.

Forrest Gump was the first movie that made me understand as a child that everyone experiences personal setbacks, but we can all persevere and move forward. Forrest (Tom Hanks), who may have thought to be autistic, is an unforgettable, sweet-natured man who will go down as one of the best characters in theatrical history. Forrest Gump is available to stream on iTunes, Amazon, YouTube and Google Play.

Wretches & Jabberers follows two autistic men as they embark on a global quest to change the attitudes society has about disability and intelligence. Tracy Thresher and Larry Bissonnette lived isolating lives in mental institutions and adult disability centers, but when they learned that they could communicate effectively through typing, that permanently changed. Wretches & Jabberers is available to stream on Vimeo and purchase on Amazon.

This story is so inspirational. As a young child Owen Suskind was diagnosed with autism and was unable to speak. Eventually, though, he and his family discovered a unique way for him to communicate, by immersing themselves in the world of classic Disney animated films. Life, Animated is available on iTunes, YouTube and Amazon.

Exploring movies like these will give you perspective and knowledge about autism, but don't stop there — it takes more than a few movies to fully understand a person's experience, so educate yourself as much as possible.

More like this
At 14, Bryce Dallas Howard Was Being Grounded From Set
By Olivia-Anne Cleary
15 Romantic Movies On Netflix That Are Perfect For Snuggling Up On The Couch
By Rachel Simon and Grace Wehniainen
15 Intriguing Movies On Netflix That Are Based On True Events
By Mary Kate McGrath, Shannon Barbour and Grace Wehniainen
10 Must-Read New Books Out This Week
By K.W. Colyard
Get Even More From Bustle — Sign Up For The Newsletter