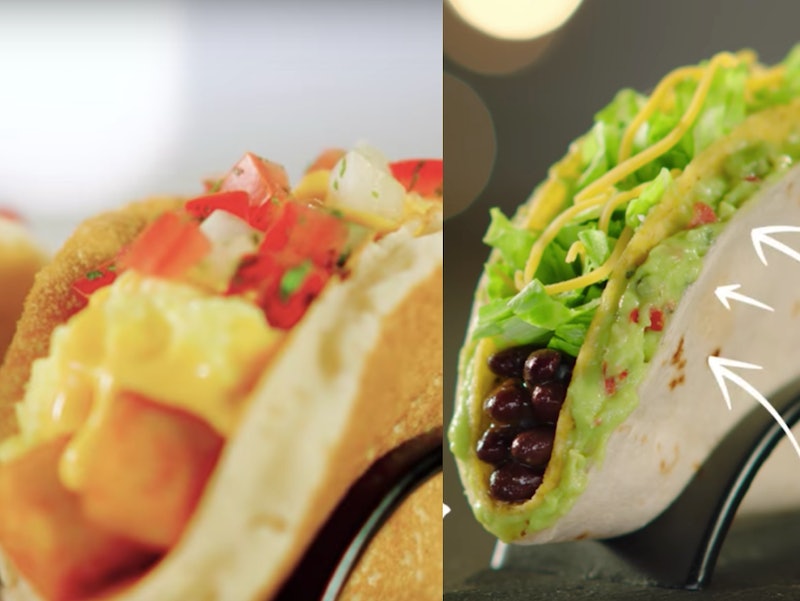 If you hit up Taco Bell on the regular, you probably have some go-to items that you always order. For me it's the Mexican pizza with no beans, and two crunchy tacos. However, if you want to leave your taco comfort zone, there are some weird Taco Bell food hacks you should know about. While you can ask to modify things at most fast-food restaurants, you might not know that you can pretty much customize anything at Taco Bell. Seriously, this is a perfect example of the notion "ask and you shall receive." And in this case, the answer is always yasss!

"Anything that involves a hard-shell taco, you can replace with a Doritos Locos shell. If you want to upgrade your basic soft-taco shell to the 10 (inch) we use on other items, you can do it," an anonymous Taco Bell manager told Thrillist. "If you want anything we sell added to your dish, we can do it. You can literally play around and create anything you want with the ingredients we have. It's a little annoying for us to do, but it's totally possible and I feel like not a lot of people know that. You just have to know that you are allowed to ask." Ready to try some of these Taco Bell food hacks? Here's how to get what you want.

While Taco Bell employees might groan over this manager revealing their secret, it's good news for you. Unless there is a line eleventy-million miles long, you can order whatever your heart desires. Of course, every employee has the right to say no to save their sanity when they’re in the weeds (and this is something you should be mindful of, too). When I was a bartender, if someone ordered a blender drink while we were slammed I told them the blender was broken. So, the lesson here is that if you want to customize your Taco Bell experience, try to do it when it's not super busy.

If you're a vegetarian, you might not know that there are some delicious menu hacks you can order at Taco Bell, like this tricked out spicy potato soft taco. Thrillist recommended ordering a spicy potato soft taco, substituting regular lettuce for romaine lettuce, adding premium Latin rice, and topping it off with guacamole and pico de gallo.

3. Get The Más Sauce Taco

Like it saucy? There's a taco hack for that. To get your own Más Sauce Taco, order a double-decker taco and substitute beef with shredded chicken. Swap the bean for nacho cheese and chipotle sauce, and add spicy ranch.

If you're doing meatless Mondays, this Double Decker Vegetarian Taco won't leave you wanting for anything. Taco Bell's For Here or To Go series suggests ordering a double-decker taco and swapping the meat for black beans, and 86-ing the refried beans in favor of a double whammy of guacamole. Top off this mouthwatering veggie taco with pico de gallo.

5. Ask For The Spicy Potato Quesadilla

The Taco Bell manager told Thrillist that quesadillas are among the most labor-intensive menu items you can order. So, if you're going to try this hack, it's best to do it when they're not slammed. If you want to get your spicy potato on, then this super easy Taco Bell food hack is for you. Simply order a cheese quesadilla and add potatoes and jalapeños.

6. Believe In The Buenos Días Pizza

If you didn't know that Taco Bell served breakfast, than you're totally missing out. And, if your running for the border for your morning meal, it's completely acceptable to order a breakfast pizza. To create a Buenos Días Pizza order the Mexican pizza and swap out the ground beef for bacon, and top your breakfast pizza with eggs. You can also make a crazy-good Breakfast in a Blanket by ordering a Skillet Bowl, making pancakes at home, and using them as taco shells.

If you like to keep it sweet in the morning, then you're going to want to get the Cinnabon Bite Breakfast Crunchwrap ASAP. Start by ordering the breakfast crunchwrap and asking for some Cinnabon delights inside the wrap. If you want to try a Taco Bell Cinnabon recipe at home, this Stuffed Monkey Bread recipe is the bomb.

OK, if you're vegan you might think Taco Bell is a no go for you. However, Taco Bell has a guide for ordering anything vegan. It's important to note that some restaurants use frying oil that's not vegan, so if you're super strict you might want to get your meal in a bowl. However, you can replace all of the meats with black beans, and just ask to the to hold the cheese, ranch sauce, and sour cream.

If you want to mix in a little Mediterranean with your Mexican food, then the Mexiterranean Bowl is a must try, but you'll have to do it at home. To create this cross-cultural dish start by ordering the Power Bowl, then ask them to remove the sour cream, cheese, and black beans. When you get home grab some lemons, hummus, cucumbers, olives, and feta-cheese crumbles. Mix it together, and start noshing.

If you want to turn your taco into a sandwich, order some Fiery Doritos Locos Tacos and nix the lettuce. Then, take your tacos home and get some bread, cheddar cheese, fire sauce, and butter. Butter your bread just like you would to make a regular grilled cheese, and stick the cheese, fire sauce, and your tacos in the middle. Grill each side for three minutes to create this epic taco-grilled cheese.

This one is another hybrid that starts with ordering at Taco Bell and ends with you adding the finishing touches in your kitchen. To make the Crunchwrap Pizza Supreme, order a Crunchwrap Supreme, take it home, and place on a baking sheet. Then top it with cheese, and your favorite pizza toppings. Bake this bad boy for 10 minutes at 350 degrees, and enjoy.

Pairing waffles with chicken or bacon is always a good idea. To treat yourself to the Cheesy Bacon Waffle Dilla, start by ordering the Cheese Quesadilla; ask them not to slice it. When you get home, get out the bacon and pepper jack cheese and add it to one side of the top of the quesadilla, then fold it in half. Next, if you have a waffle iron, heat your creation for three minutes. If you don't have a waffle iron, you can stick it in the oven. I suggest adding a little maple syrup too.

This is a great option if you're having some friends over for dinner, but you don't want to commit to doing all of the cooking. Make a quick Taco Bell run, order five bean burritos, and ask them to add jalapeños to just one burrito. Next, head home and get out some cheddar cheese, enchilada sauce, and nacho cheese Doritos. Put the burritos in a glass baking dish, and top with enchilada sauce and cheese. Bake for 25 minutes at 350 degrees. Finally, smash up the Doritos and sprinkle them on top. It's called the Bean Burrito Roulette because it's a total surprise which burrito contains the jalapeño peppers.

14. Bring On The Brunch Nachos

Nachos for brunch? Yes, please. It's super easy to make these delicious Brunch Nachos at home to take to your next brunch potluck. Start by ordering a Nachos Bell Grande; ask them to hold the sour cream, and swap the beef for steak and the nacho cheese sauce for the three-blend cheese. Substitute the refried beans for black beans, and add red sauce. Once you get home, cook up a sunny-side egg, and slice an avocado. Top your nachos with avocado and eggs, and you've got Brunch Nachos that will be a big hit.

If you think you've evolved past Taco Bell, think again. Between the secret menu and the hybrid hacks, Taco Bell has upped its game with recipes and ideas that even grown-ass women can appreciate.