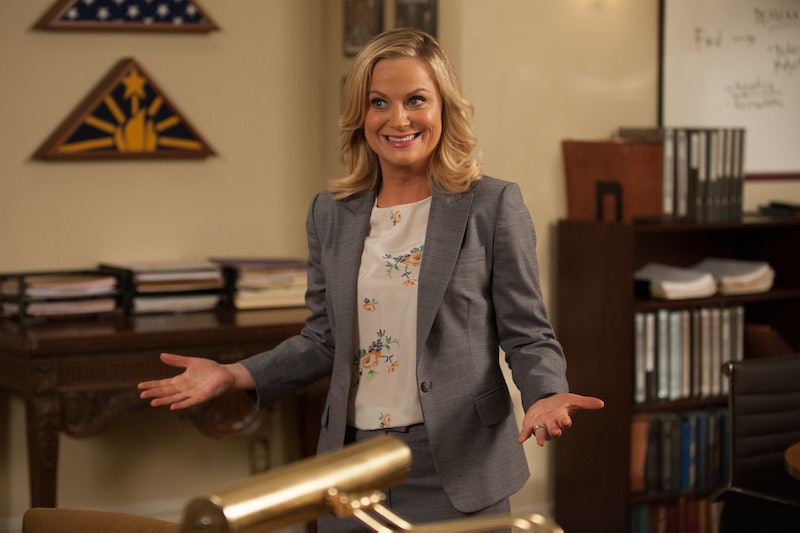 NBC's Parks and Recreation officially ended in 2015, meaning the show never had the chance to draw influence from the totally surreal and often unpredictable state of politics in 2017. But while Parks and Recreation ended before America elected a former reality TV star or saw its first female presidential nominee of a major political party, the show's heroine has actually said more than a few things which have proven to be startlingly relevant to politics in 2017. Whether she was looking to smash the patriarchy or simply dropping some surprisingly insightful one-liners, these Leslie Knope quotes show she may have known more about the future of American politics than even she realized.

While Pawnee is certainly not Washington, D.C. and Parks and Recreation didn't predict the election of Donald Trump (as another comedy sitcom did), the show did dedicate more than a few episodes to something we've been seeing more and more of since Trump took office – the challenging of male-dominated government institutions. In fact, Knope's particularly passionate brand of feminism may be especially inspiring to women and men looking to resist Trump's administration. Moreover, throughout the series, Knope has dropped multiple quotes that seem eerily relevant to what's currently unfolding in Washington.

Don't believe me? Here are 15 quotes from Leslie Knope that prove to be startlingly relevant to politics in 2017:

"I don't want to be overdramatic, but today felt like a hundred years in hell and the absolute worst day of my life."

Shortly after America decided to hand the presidency over to a former reality TV star with frightening ideas about what fame entitles men to do to women, therapists and psychologists reported seeing an overwhelming number of patients suffering from post-election anxiety and depression. While Trump's election spurred different feelings in everyone, this Knope quote from Season 4 perfectly captures post-election anxiety and depression can feel like.

"Why didn't you just tell everybody the truth?"

In Season 2 of Parks and Recreation Knope asks Jerry a question I've often found myself asking in this new era of alternative facts: "Why didn't you just tell everybody the truth?" Whether they're discussing crowd size, fake news, fabricated Bowling Green massacres, or instances of alleged voter fraud, Trump's administration has already been caught appearing less than truthful on more than one occasion.

Faced with a president who's bragged about grabbing women without their consent and a White House administration that doesn't seem particularly interested in protecting women's rights – reproductive or otherwise – many women have stood up to say they'll grab the power back if necessary. Millions of women marched around the country in support of women's rights and the rights of other marginalized groups the day after Trump was sworn in to office.

"I fully believe that a woman should be in charge of what happens to her body."

While Knope may be a staunch pro-choice supporter, many conservative legislators don't share her opinion on a woman's right to bodily autonomy. Just days after taking office, President Trump signed an executive order prohibiting international health organizations who perform or provide information about abortions from receiving federal funding. Not surprisingly, Trump signed the order while surrounded by white males, which brings us to...

"There are no consequences to my actions anymore... I'm like a white, male U.S. senator."

If the election of a man caught on tape bragging about kissing women and grabbing their genitals doesn't drive home the point Knope makes in episode 8 of Season 6, I don't know what will.

"There are no consequences to my actions anymore," Knope says. "No matter what I do, literally nothing bad can happen to me. I'm like a white, male U.S. senator."

"Maybe it's time for more women to be in charge."

When lewd photos were sent to all of the women working at Pawnee City Hall in episode 1 of Season 4, Knope shares a thought with reporter Perd Hapley that's startlingly relevant to American politics of 2017. "When men in government behave this way, they betray the public's trust," Knope says. "Maybe it's time for more women to be in charge." Well, women are hearing Knope's call. Organizations that work to help women run for office have reported an uptick in the number of women reaching out to them about becoming potential candidates since Trump's election.

"Math is worthless in real life."

In the era of President Trump, math has quickly proven to be a confounding subject. White House Press Secretary Sean Spicer may have been hoping no one would check his math when he told reporters the crowd at Trump's inauguration "was the largest audience to ever witness an inauguration, period, both in person and around the globe."

Both TV viewership numbers from Nielsen and side by side comparisons of photos from Trump's inauguration and Obama's inauguration in 2009, however, point to the fact that more people watched Obama get sworn in.

In 2017, outrage has become a familiar feeling for many Americans. Whether it's over Trump's Cabinet picks, his travel ban, his move on the Keystone XL and Dakota Access pipelines, or one of his administration's other policy proposals, many voters choose to channel their outrage into phone calls to Congressional and state representatives. In fact, members of Congress reported being flooded with calls (the Senate reportedly received as many as 1.5 million a day) over Trump's Cabinet picks in early February.

Many Americans have reached out to their Congressional representatives so often since Trump took office in January that they might as well put them on speed dial. Whether its to share their concerns about Trump's Cabinet nominees or weigh in on policies coming out of the White House, constituents are actively trying to make their voices heard by Congress.

"I need a good plan though. I don't want to cause a panic."

Plans are good. Plans made to address and thwart panic before it happens are even better. Trump's executive order to temporarily suspend refugee admissions and ban travelers, including green card holders, from seven predominantly Muslim nations sparked immediate outrage, panic, and a bit of chaos when its hasty roll out left hundreds of travelers detained in airports.

"Hey Leslie, it's Leslie. Hang in there."

If we've learned anything from the state of American politics in 2017 it's that self-care is vital to staying committed to effective political activism. With the Trump administration set to remain in the White House for at least the next four years it's important to remember this is a marathon, not a sprint.

"I guess some people object to powerful depictions of awesome ladies."

Is Knope on to something here? Did fear of a female president or an objection to authoritative women contribute to Hillary Clinton's election loss? According to The Atlantic, Clinton's presidential candidacy spurred a backlash of misogyny that could have a lasting impact on America.

Sixteen years before the 2016 presidential election, The Simpsons predicted Donald Trump would be president of the United States. Since his real election victory, reports of his inflammatory tweets, diplomatic gaffes, potential conflicts of interest, and totally surreal Cabinet picks have driven some to wonder, is this real life? Yes, yes it is. As Knope says, "It's not a movie, it's our real life."

"A blind stubborn belief that what I am doing is 100 percent right."

It seems Knope may not be the only politician – real or imagined – who is motivated by a blind stubborn belief that they're 100 percent right.

"You know what? America is awesome."

Trump's campaign promise to "make America great again" spurred raucous debate over when – if ever – the country had stopped being great. While Trump painted a dark picture of America, former President Barack Obama argued the country "is already great."