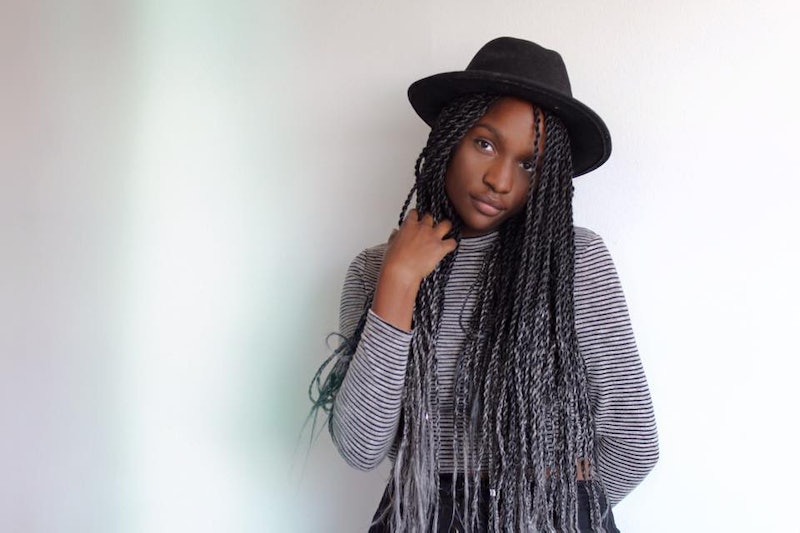 Editor's Note: While we're aware that seeing these offensive slurs in full may be triggering for some readers, we are using the spelling and phrasing each contributor used in their response verbatim, which is why you will see some slurs partially-censored below while others are not. This is meant to best reflect the experience of each respondent.

As a Black woman, I'll always remember the first time I heard someone call me a "nigger." Now, I want to specify and stress the word "heard" here, because we as otherized peoples (people of color, members of the LGBTQI+ community, people who emigrated to this country, etc.) are not always privy to conversations that happen amongst white people when they're alone. It happened when I was at the house of a friend of mine, a guy I had a crush on. We all were sitting gathered around the TV, watching him play Halo on Xbox Live. The funny thing about Xbox Live is you can hear what the other players are saying in real time. A boy from my high school asked my crush if he still had that "nigger" over at his house.

I can't recall what day of the week it was, what month, or even the year, but I can tell you it happened approximately around 8 p.m.. I know that because I spent the minutes following looking at my phone and timing how long I could last without crying. I made it back to my mom's car, made it the entire ride home, then allowed the tears to flow as I sat in my room alone. I remember taking pride in the fact that the only witnesses to how that word got to me were the eyes of the numerous Jonas Brothers plastered on my wall.

I tried to rationalize it at first, thought of it as being initiated into the "fraternity of marginalized minorities." (I once asked one of my friends in a fraternity why he endured the hazing. He explained very plainly that it helped him and the other pledges to become closer, that he didn't necessarily enjoy it but it made them "brothers," so to speak.) But as a marginalized minority growing up in a predominantly white town, I wondered what the experiences of others were like. So I asked a variety of people to recall the first time they had ever heard hate speech being used against them. These are their stories.

"Before I had ever heard 'tranny' puncture the air around me, 'faggot' was there to remind me that I was grotesque. I grew up revering my older sister as a model of the human I wanted to be. I was still in elementary school when she had entered middle school, and the word 'faggot' was among the things she learned there. When she first called me a 'faggot' as the punchline of a joke, it was clear to me then that my [very] being was a joke to the world. The way the consonants twisted her lips meant that this word was never constructed to reference the living, and I would have been better off dead."

"'You're such a faggot,' she said, as my mother walked away from me one Saturday morning. My heart sunk, and my body felt weighed down as the feeling of disbelief turned into the shame and sadness I felt every time I heard that word in school or on the streets. I could feel the tears swelling from my eyes, the tightness in my chest robbed me of my breath, the dizziness that made me feel sick to my stomach, the feeling of being numb. It was almost 18 years ago, but the pain of that moment still lingers. I didn't really know what that word meant all at that age, but I know what it felt like to be called that."

"[It happened] at recess, as a third grader, while being called 'it' during a game of tag. As I reached to tag a white boy, my definition of power changed. 'You can’t tag me. I don’t play with nigger girls,' he spat in my direction. Moments before, I was running around joyfully, and then my chubby little feet seemed stuck in the grass as I turned my head and, for the first time, noticed the primitive difference between myself and the children around me — our skin colors. I instantly felt unprotected. With one phrase that little boy had used his power to strip me of mine."

"[It was] my junior year of high school, and my mother and I were just leaving the homecoming football game. The sun had heated the interior of our car and my mother was lowering the windows just in time for the word "faggot" to pierce through the summer haze and strike us both. Three younger boys, members of the lacrosse team, snickered as we drove away.

At the time, my mother and I both lacked the frame of mind to acknowledge it out-loud, but I silently and coolly watched as she tried to hide the tears streaming down her face on the drive home. One of her greatest fears had not only just come true, but she stood witness to it, silenced by shock. I wanted to seem strong for her, to seem unaffected, but knowing that this jab at me had her so upset added a layer of guilt to my own pain and embarrassment. It was during this silent drive that I truly came to understand my mother’s explanation for her tears, years earlier, when I had first come out — they were not tears of her disappointment, they were tears of fear. She was afraid for me — afraid that I was entering a society that wasn’t made for me, didn’t want me, and would make me feel other any chance it got."

"The first time someone called me the n-word I was in sixth grade, at a small independent school (read: mostly white and mostly bougie). I was one of two black students in our grade of about 20 total. On a break between classes, there were a few of us in the classroom, running around, being rowdy, when one boy turned to me and yelled the n-word. I remember my best friend and I both froze, but I also remember that everyone else in the class kept on as though they weren't phased by it. I'm not still not sure which part was more poignant to me: hearing that word directed at me for the first time, or seeing how unbothered and immune all of my peers were to it."

"I was in kindergarten. [It was] during recess, I was on the swings. I was swiveling around in my swing and I got a little too close to the kid next to me. He turned around and screamed, 'You're a spic!' I didn't even know what a spic was, and had to ask my father when I got home."

"When I was in elementary school, probably as young as 5th or 6th grade, kids used to alter my last name and call me 'Faglioli.' It made me feel like sh*t because I didn't even realize I was gay yet."

"I was riding in an Uber, headed towards an airport in California, and in the middle of the highway, the driver asked me where I was from. The moment the word 'Mexican' came out of my mouth, he quickly told me I belonged to a dangerous nation of criminals who don't know their place, and followed this with a storm of insults. I tried to get [out], but I realized I was in the middle of nowhere without cell service, details he used to further intimidate me. I eventually got [out] safely in a more populated area, but during the whole ride felt a tremendous amount of impotence as I had to navigate defending my identity while also trying to keep myself safe."

"There are most likely earlier incidents of hate speech that I've blocked out or don't remember, but this one sticks out. When I was 18, I was a marshal for the NYC dyke march, which meant that as marchers came down the avenue I and a few other people would hold hands in front of each side street to block traffic. This one news reporter, an older cis white guy who seemed to be alone, started talking to me, asking me questions while we were stopped, and when I didn't answer, he started yelling, 'you fucking dykes, always stirring shit up!'

"I was in the 4th grade when me and my friends were getting into the subway to go home after school. An older white man, roughly in his 60s, grew impatient while waiting for all of us to swipe in. He pushed past two of our friends and screamed 'f**king monkeys!' before knocking them both to the ground on his way out. Racism was something I just read about in school before I heard him say that."

"He slammed a door in my face and spit the word "lesbian" back at me. 'Lesbian—' like it was a dirty word, a bad word, a word that not only othered me, but that was my identity entirely. I was 14. His then-girlfriend proceeded to 'out' me to my entire middle school. Now she posts about feminism on Facebook and probably forgets just the extent to which she tricked me into believing my sexuality was disgusting."

"At age 15, I was waiting for my mother to pick me up from a party. There was a fight that had caused a disturbance in the neighborhood, so the police were called. A dozen squad cars showed up long after the perpetrators had left and started screaming at the predominantly minority crowd to disperse. As I was only 15, I just stood there and continued to wait for my mother to pick me up. A cop charged at me, threw me against a nearby tree, dropping me like a ton of bricks and shouted 'what don't YOU people understand.' My parents and I filed a former complaint against the officer. He has since been promoted to Lieutenant."

"One night, after a particularly rough, emotional argument with my girlfriend, we were standing outside a club in Bushwick when a man on a bike rolled through and belted mockingly, 'haha MUFFlove.' Maybe that wouldn't have been so jarring if my girlfriend wasn't sobbing on my shoulder."

"I was in middle school, defending my best friend outside after school. Kids were calling her the n-word, and throwing stones at her while surrounding her. I saw what was happening and got in front of her and started throwing stones back at them. Kids began calling me "faggot" and chanted both obscenities at us while throwing stones. It was really my first time dealing with direct racism and homophobia at the same time."

More like this
Bustle Daily Newsletter: October 4, 2022
By Hayley Schueneman
Black History Month UK’s 2022 Theme Calls For Action, Not Words
By Maxine Harrison
Chris Kaba's Family Continue Fight For Justice After Viewing Police Bodycam Footage
By Sophie McEvoy
14 Scary Campfire Stories To Tell Your Friends
By Charlotte Ahlin and Kaitlyn Wylde
Get Even More From Bustle — Sign Up For The Newsletter