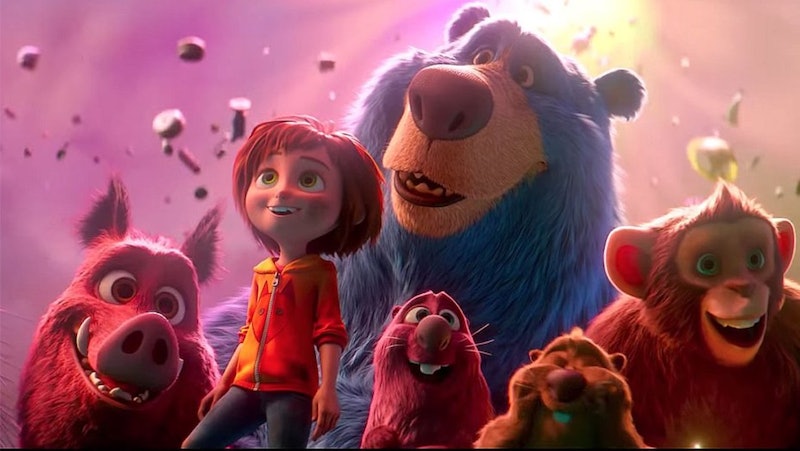 A number of animated sequels and original films are headed to the big screen this year, and we're so ready for it. Going to the movies has always been a great way to escape reality, and animated movies — maybe because they're often aimed at kids — provide even more of a break from the world. In 2018, there were several animated movies that did well in the box office, most notably The Incredibles 2 and Hotel Transylvania 3: Summer Vacation. This year's late includes everything from remakes of classic Disney movies to modern sequels, plus some new stories, which may get sequels of their own. Keep a lookout for these 17 animated films coming in 2019. There's definitely something for everyone.

Indeed, the animated future is looking mighty bright this year. For one, there's a new Toy Story film on the horizon, and you can bet the fourth installment of that Pixar saga will make you cry as much as it makes you laugh. Some of your favorite stars are getting in on the fun with voice work, most notably Ryan Reynolds in the Pokemon film adaptation you never thought you'd see. And Spies in Disguise wins for Most Surprising Trailer, in a twist you just have to watch and see.

It's been five years since everything was awesome with the citizens of Bricksburg, but now they face a dangerous new threat when LEGO DUPLO invaders from outer space start to wreck everything. The battle takes the LEGO universe by storm and now it's up to the city's biggest heroes to restore harmony to the universe.

If you fan hard for the Queen and her pets, this animated take on Elizabeth II's favorite breed is for you.

3. How to Train Your Dragon: The Hidden World

How to Train Your Dragon: The Hidden World picks up the story of the unlikely friendship between a Viking named Hiccup (Jay Baruchel) and a fearsome Night Fury dragon named Toothless. In the sequel, Hiccup has created a dragon utopia of his own that seems nearly perfect until he discovers Toothless isn't the only Night Fury dragon out there. Soon he must seek "The Hidden World," another secret dragon utopia, before a hired tyrant named Grimmel (F. Murray Abraham) gets to it.

Wonder Park tells the story of a magical amusement park that comes to life after a young girl June (Brianna Denski) loses hope in her own imagination.

The Disney classic Dumbo gets a new live-action/CGI adaptation that'll add new, realistic emotion to the tale of a newborn elephant with an extraordinary ability.

Mr. Link, an eight-foot tall creature covered in fur, is tired of living alone. So, he goes on a journey with an explorer named Sir Lionel Frost to find his long-lost relatives in the valley of Shangri-La.

Shaun the Sheep: Farmageddon is a British animated sci-fi comedy based on the Shaun the Sheep television series, and the original movie.

A young man (Justice Smith) joins forces with Detective Pikachu (Ryan Reynolds) to figure out the mystery behind his father's disappearance.

Both live-action and animated, Aladdin is definitely one of the most highly anticipated films of 2019, featuring lots of newcomer talent — and Will Smith.

Not much has been revealed about the plot of this sequel, but if it's anything like the first one, it'll represent our hilarious pets well.

Beyonce, Donald Glover, James Earl Jones, Chiwetel Ejiofor and Seth Rogen all provide voices in this live-action and animated reboot of The Lion King, so brush up your knowledge of those classic lyrics.

In Toy Story 4, it looks like the old gang may find a new groove. When Woody (Tom Hanks) finds a new toy called Forky (Tony Hale), they and the gang embark on a road trip to see how big the world can be for toys.

The Angry Birds Movie 2 is the sequel to the 2016 film of the same name and will commemorate the 10th anniversary of Angry Birds video game.

A young girl named Marla (Anya Taylor-Joy) finds herself traveling to an animated world of Playmobil to find her missing brother (Gabriel Bateman).

Super suave spy Lance Sterling (Will Smith) and scientist Walter Beckett (Tom Holland) are to total opposites, but when things take a weird turn for the two, they have to rely on each other in a new way. And if this odd couple can't learn to work as a team, the whole world is in peril.

The spooky family face-off against a reality-TV host, all while preparing for their extended family to arrive for a major celebration. This movie has an all-star cast including Charlize Theron, Bette Midler, Allison Janney, Chloë Grace Moretz, Finn Wolfhard and Nick Kroll.

The sequel to the hugely popular Disney musical will be a hot ticket this holiday season. The film doesn't have an official trailer just yet, so rewatch the original's to refresh all those "Let It Go" vibes.

There are so many options to choose from this year, so best that you just decide to see them all.