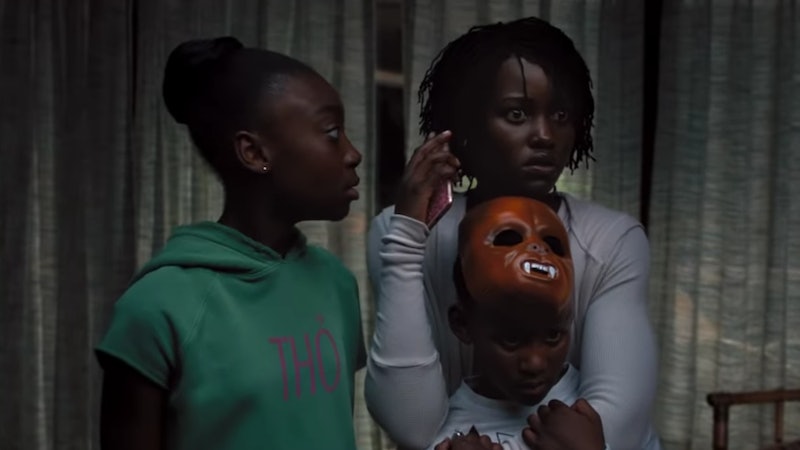 In case you haven't had time to properly stew over your viewing of Us, Twitter's got you covered. Not only is it a great place to bounce theories off of each other and try to come to terms with whatever went on in director Jordan Peele's new hit horror movie, it's also good for a laugh, as evidenced by these amazing Us memes and tweets. For those who haven't seen the film: the following tweets won't necessarily spoil it for you, but they should make you laugh, even if it's just out of confusion.

As you all know by now, Us stars Lupita Nyong'o as Adelaide and Winston Duke as her husband Gabe Wilson. The movie follows as, along with their two young kids, they go on a little getaway to a quiet vacation house near Santa Cruz, only to find themselves under attack by doppelgängers, known as the Tethered. Naturally, the terrifying idea of coming face to face with another person who looks just like you — and who wants to kill you — spawned memes even before Us was released in theaters. But it's safe to say that since the film's release on Friday, March 22, fans have upped their meme game significantly, resulting in these 17 best Us memes and tweets.

Warning: this post has a ton of spoilers for Us. Continue at your own risk.

1. The Beyoncé / Us Mashup You Deserve

Despite the serious, terrifying nature of the film, this comparison to Destiny's Child's "Lose My Breath" is hilarious. A dance-off with your Tethered self would be a great use of your time, honestly. Better than death, anyway.

Mariah Carey actually fought off her snooty doppelgänger in her 1999 "Heartbreaker" music video, so she could definitely hold her own if The Tethered were real. She's got some moves!

3. Jason Is The Real Hero

Jason (Evan Alex) is the youngest Wilson, but he really knows how to stay alive. He — spoiler alert — managed to trap his Tethered, Pluto, in the closet. It's because of his quick thinking that he and Adelaide can get away from the house.

4. Pluto Was The Scariest Of All

Speaking of Pluto, he really was the creepiest. He was the most animal-like and could easily kill you in a single bound.

5. Get Lupita All The Awards

A lot of actors in the movie played two roles. However, Lupita had the biggest, most pivotal role in the film, and she really nails it. If she's not on one major awards ballot, the system has to be overturned.

Nyong'o already won an Oscar for Best Supporting Actress in 2014 for 12 Years a Slave, but Best Actress is calling her name with this movie. It's only March, but it'll be hard to top her performance in Us by the time the 2020 Oscars come around.

Whoever invented the "J. Cole went platinum with no features" meme might not have expected it to go this far, but it's been around a while and this Us one is too funny.

8. The Tethered Will Haunt Us All

Major spoiler alert! The Tethered have to do every single thing the above ground version of them does. From dancing to who they marry to having kids, they are forced to mimic it all. And you also learn that they have to eat rabbits whenever their above-ground counterpart eats. So if you're having a big meal, just know somewhere, underground, a crazed version of you is chowing down on some bunnies, and probably not enjoying it.

From the trailer, you know Gabe tries to fight off the family in their driveway with a baseball bat. It's a great moment, and for a hot second you think you might get to see Winston Duke beat some people up.

A great movie will have you thinking about it for days, and Us is certainly no exception. Not only are there so many symbols and possible hidden meanings, there are also major twists that will keep you up at night.

Spoiler alert. Jason is the only one that was down in the hallway where The Tethered lived while Adelaide fought Red. Whether it was the story or the fighting, or maybe the noises Adelaide made when she killed Red, but something tipped him off to the fact that she was actually a Tethered being. Makes you really think some type of way when it comes to your own parents.

12. Maybe Having A Tethered Could Be Fine?

In an ideal world, The Tethered wouldn't be hellbent on killing you, and maybe you could be goofs together. If you're not a twin, that'd be a fun first. But the world isn't perfect and nice, and neither are The Tethered.

13. Zora Is A Better Driver Than Most Of Us, TBH

Zora (Shahadi Wright Joseph) got in that car with a purpose and did not disappoint when she chose to drive away from the house. They knew they were under attack and saw her Tethered, Umbrae, coming at them. She was ready to run her over. There was some complications, but this was definitely everyone's reaction in the theater.

14. The Tethered Were A Little Off, To Say The Least

The Tethered couldn't really talk besides Red, and their movements were odd to say the least. Acting "normal" would not be a strong-suit of theirs.

It's already been established that Us is a head scratcher and very complex. But having to then describe it all to someone else, even if they've seen it? Try again.

The Tyler twins were a bit snotty and off-putting towards the Wilson kids, plus brats to their parents, but the constant cartwheels was a show-off moment for sure.

17. In A More Perfect World

Yeah, a doppelgänger would be pretty cool to come across, if they weren't murderous.

Us is sure to become a horror classic and has really upped the ante for the genre. But, it's also given us these lovely, hilarious memes and tweets. And really, we'd be greedy to ask for more.

More like this
Zendaya Shares Intimate Photo With Tom Holland To Wish Him A Happy Birthday
By Bustle Editors
The Trailer For The Whitney Houston Biopic Has Twitter Feeling Heated
By Radhika Menon
The First 'Percy Jackson & The Olympians' Teaser Comes With An Ominous Warning
By Grace Wehniainen
Nicola Coughlan Shared A Lady Whistledown Excerpt From ‘Bridgerton’ Season 3
By Grace Wehniainen, Alyssa Lapid and Sam Ramsden
Get Even More From Bustle — Sign Up For The Newsletter