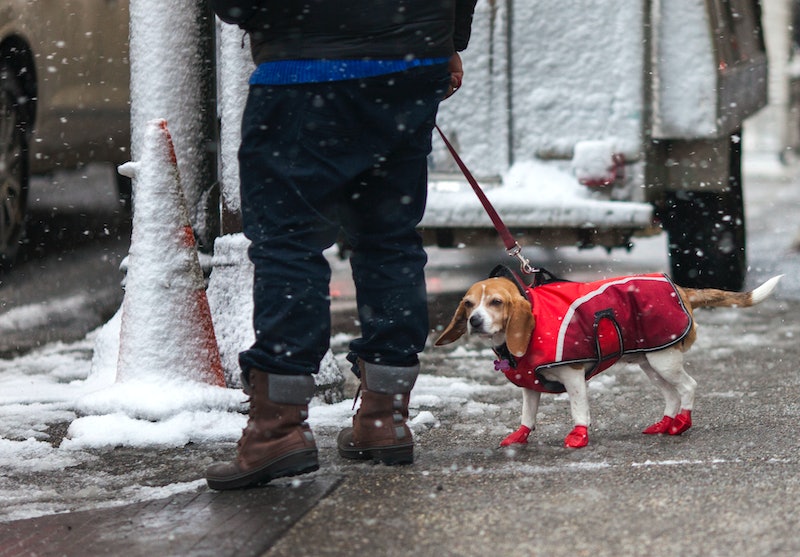 If you'll be in the northeast anytime over the next few days, make sure you're ready for Winter Storm Stella. New York, Washington D.C., Boston and are set to be pummeled by a high-impact snowstorm, bringing up to a foot and a half of snow throughout Monday and Tuesday. If you're going to be stuck inside, you might as well check out these Blizzard 2017 memes to keep yourself occupied while you stay warm.

Stella is expected to hit the northeast on Monday night, and it'll continue throughout Tuesday until the early hours of Wednesday. Winds may reach 50 miles per hour from the New York City metro to parts of southern New England, creating blizzard conditions, and coastal flooding may occur in Jersey Shore, Cape Cod, Long Island and other east coast beaches.

Needless to say, this is going to make traveling a nightmare. Flooding will likely cause road closures, as will downed power lines, trees, traffic accidents and a general absence of visibility. You should also expect major delays at airports throughout the area.

In short: You'll want to stay at home if possible — that is, if it's even an option to leave the house to begin with. If you do find yourself stuck at home, comfort yourself with some memes about the blizzard that's preventing you from opening the front door.

It's true — this storm had bad timing.

Not the most unreasonable reaction in the world.

This is pretty impressive as far as meme mashups go.

There's a lot going on here.

Make Sure To Prepare

All right, this is less of a meme and more so just a picture of a cute dog in the snow. But you're still glad you saw it, aren't you?

This is a screenshot from Get Out, and it's especially pertinent given that [spoiler alert] within the world of the film, the character depicted is from New York City.

I can only hope to one day be as excited about anything as that cat is about the snow.

Unfortunately, Trump has yet to tweet about the storm, so it's probably going to happen.

Don't Overreact, Except Maybe Do

But no, really, this is going to be a huge storm.

It's not supposed to work this way.

It's Okay To Be Dramatic About This

This is not overreacting.

You know there's a storm coming when the yogurt is gone.

Airports won't be that much fun at all.

Any cat that can deal with the snow is pretty impressive.

The Most Helpful Type Of Forecast

Because that's really the most pressing question, right?

The most important thing during any blizzard is to stay safe. Finding good memes about the blizzard is a close second, though.

More like this
The Best Memes & Tweets About Twitter’s Potential Shutdown
By Alexis Morillo
Twitter Is Still Reeling Over Tyler’s 'Strictly' Exit
By Sophie McEvoy
'Neighbours' Is Officially Coming Back & Fans Are Going *Wild*
By Sam Ramsden
Twitter Can’t Get Enough Of The Romance In 'Ekin-Su & Davide: Homecomings'
By Sophie McEvoy
Get Even More From Bustle — Sign Up For The Newsletter