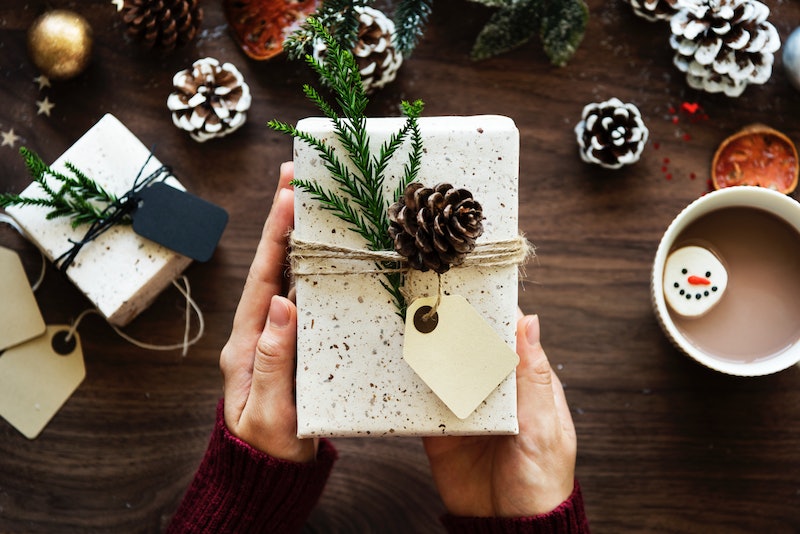 There's a reason why so many sitcoms have covered the dreaded office Secret Santa gift exchange — it has the potential to be a highly stressful game of chance and, well, disappointment. But if the thought of having to buy a random co-worker a present that they open in front other entire office is giving you hives, check out this list of secret santa gift ideas for co-workers to make things super easy. Best part? They're all $10 or under.

While the practice of gift giving is hardly a new one — pre-Christian pagan communities in Europe and the Middle East celebrated a host of midwinter festivals that focused on food, wine and exchanging presents — "Secret Santa" is a distinctly contemporary, Western tradition. The rules are fairly straightforward: the names of all participants are written on pieces of paper and placed into some sort of a container (usually a holiday-themed hat because, you know, "'tis the season"). Each person draws a name, and are then responsible for buying that person a present and anonymously gifting it to them. Because of the nature of the game, there's usually a price cap that hovers around $10.

Really, deeply lost even after reading through this list? A $10 gift card is a very reasonable choice. Just make sure it's to a place your person likes.

The anonymous element of Secret Santa can probably be attributed to the Scandinavian Julklapp, which translates roughly to "secret Santa" -—"jul" means "Christmas" and "klapp" means "to knock." According to tradition, you're supposed to knock loudly on one's door. Once they open it (or in some cases, you can just open it yourself?), you're supposed to throw your present inside, shut the door and run away before anyone inside sees you. Yes, actually. Yes, I've also been giggling for about 10 minutes imagining that scenario. Maybe suggest trying that tactic for your office Secret Santa? It would certainly make the event more interesting if everyone was trying to clandestinely lob presents into one another's cubicles.

The julklapp tradition apparently stems from Knecht Rupert, or "Servant Rupert," who traveled from house to house delivering gifts without ever being seen. Knecht Rupert serves as Saint Nicholas' assistant, kind of. Er, more like errand boy. Regardless, he's the guy with gifts. Another element of the julklapp tradition is the practice of writing a funny inscription on a present, rather than simply addressing it by name. While you do have to put the recipient's name on your own Secret Santa gift, it could be fun to add a little something extra. Maybe an inside goof. Maybe a nice note about synergy. Listen, office culture can be a bit, uh, odd. You do you.

An secondary tradition from which Secret Santa is derived is Germanic folklore. Rather than elves, Santa Claus had "wichtels" (fairies) who helped him make and deliver toys. They flitted about anonymously, bringing joy and aiding the big guy in the red suit.

But ultimately, gift giving during the holiday season is meant to spread joy. It's a sentiment that's been around since the pre-Christian days, when midwinter festivals were designed to serve as bright spots among the darkest, coldest, harshest days of the year. Like, winter is tough now, and we have heat, electricity, Netflix and Seamless. So if you're feeling anxious about gift-giving (or getting), remember its roots: a moment of kindness and light in the middle of darkness.

More like this
Is The Insta-Famous Always Pan Actually Worth It?
By Jessica Goodman
13 Summer Solstice Quotes To Celebrate The Longest Day Of The Year
By Sadie Trombetta
60 Gifts That Are Selling Out On Amazon Because They're So Freaking Clever
By Allison Bolt
The Cabincore Home Decor Trend, Explained
By Jessica Goodman
Get Even More From Bustle — Sign Up For The Newsletter