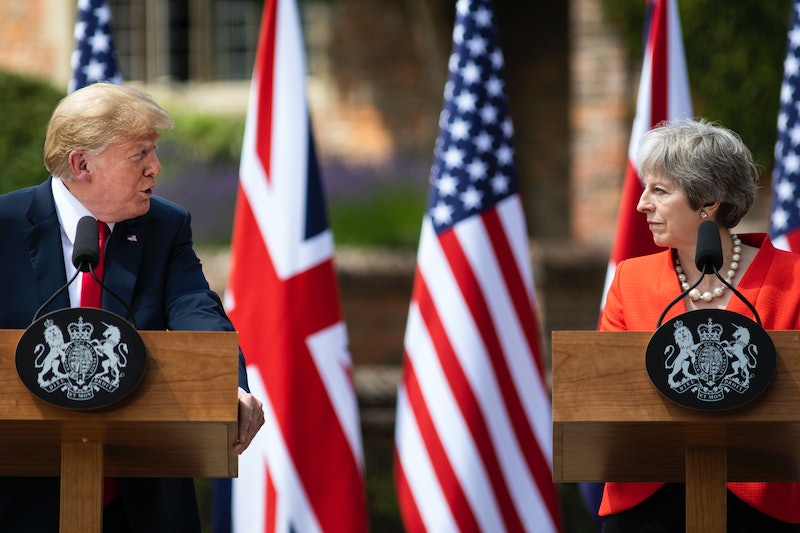 How do you deal with a U.S. president who might just be trying to undercut you? Well, according to a number of Britons, you channel Hugh Grant's character in the romantic Christmas film Love Actually. Some Brits urged British Prime Minister Theresa May to respond to President Trump's undermining of her Brexit strategy by pulling a Love Actually moment at their joint press conference Friday. But Theresa May and Trump's Love Actually moment didn't happen, leaving Britons left to simply imagine how it might have gone down.

Shortly after The Sun published Trump's blistering rebuke of May's Brexit strategy, Britons began asking themselves one question: Had May seen the film Love Actually? In an interview with The Sun, Trump suggested May's Brexit plan would "kill" any potential U.S.-U.K. trade deal after claiming he'd "told" her how to handle Brexit, "but she didn't listen."

In the film Love Actually, Grant's character plays a newly-elected prime minister who, upon finding the U.S. president sneakily making a pass at his love interest, uses a press conference to stand up to his American counterpart. "I love that word relationship," Grant's character, David, says at a presser in response to the U.S. president's (played by Billy Bob Thornton) claim that the U.S.' "special relationship" with the U.K. "is still very special" as he'd got what he came for.

"Covers all manners of sins, doesn’t it?" Grant's character continues. "I fear that this has become a bad relationship. A relationship based on the president taking exactly what he wants, and casually ignoring all those things that really matter to Britain."

"A friend who bullies us is no longer a friend," Grant's character says in the film. "And since bullies only respond to strength, from now onward I will be prepared to be much stronger."

In real life, May sidestepped questions about Trump's interview with The Sun, leaving Britons to bemoan her missed Love Actually moment on social media.

More like this
This Episode 6 Moment Foreshadows Viserys' Fate On 'House Of The Dragon'
By Grace Wehniainen
'The Distant Echo’s Ending Mirrors 'Karen Pirie' In One Crucial Way
By Catharina Cheung
10 Stranger Things-Inspired Halloween Costumes For True Fans
By Emma Carey
Nicola Coughlan Shared A Lady Whistledown Excerpt From ‘Bridgerton’ Season 3
By Grace Wehniainen, Alyssa Lapid and Sam Ramsden
Get Even More From Bustle — Sign Up For The Newsletter