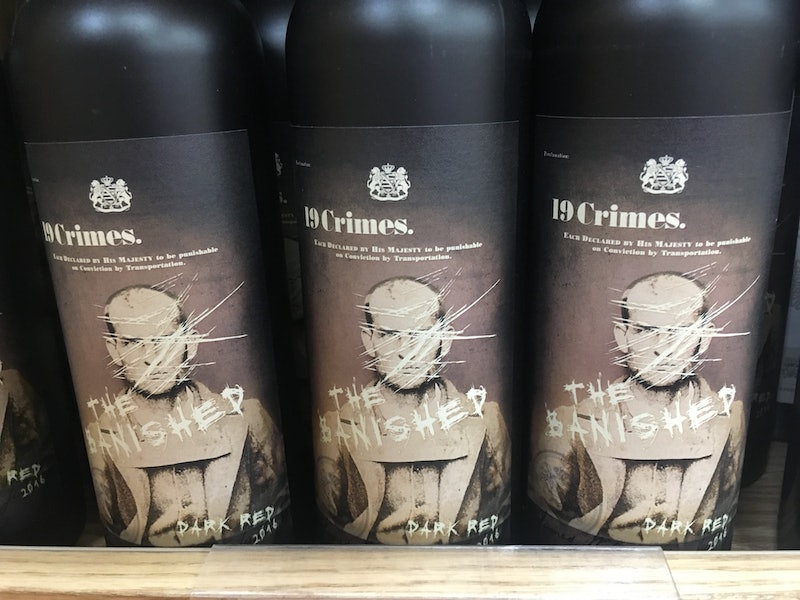 Two of my absolute favorite things in the world are wine and spooky things, so you’d better believe that when I was alerted to 19 Crimes wine’s existence, I sat straight up and took notice. With labels that highlight the stories of real life, historical people who were sent to prison colonies in Australia in the 19th century, 19 Crimes’ wines — which are mostly red (another bonus in my book) — do a lot more than just give you something nice to sip on as the weather turns colder and the leaves start to change; they also bring history to life.

I mean that literally, by the way. There’s an augmented reality app that goes along with the wine called Living Wine Labels — and when you examine 19 Crimes’ bottles through it, the people depicted on them actually start talking to you. Heck, and yes.

Founded in 2012, 19 Crimes is nestled under the massive wine company known as Treasury Wine Estates. (Treasury Wine Estates is also the parent company of brands like Beringer, Rosemount Estate, Sterling, and Stag’s Leap, so when I say “massive,” I really mean it.) They’re widely available; you can get ‘em at Trader Joe’s, various grocery store chains, and a huge number of liquor and wine stores, as well as from 19 Crimes’ online store.

But as good as the wine is — and word on the street is that it’s good! — what really sets it apart is the storytelling inherent in each bottle. The augmented reality aspect of the labels allows each of the prisoners featured on the labels to speak about their own history — a move which has been hailed as “an amazing example of adult-targeted augmented reality,” as Forbes put it. Here’s what it looks like in action.

The history is brutal. Penal transportation — the practice of removing convicts from society and sending them far, far away, often to penal colonies established specifically for that purpose — was the punishment of choice for particular sets of crimes in a number of countries for many centuries. In England, though, it was undoubtedly at its height for the 80 years between 1788 and 1868. During this period, petty criminals and political prisoners alike were transported sometimes to America, but more frequently to Australia — where, it should be noted, the folks who set up the penal colonies conveniently ignored the fact that there were, y’know, already indigenous people living there — in order to alleviate overcrowding in British prisons and ease up on the court issuing so many death sentences. More than 160,000 convicts ultimately ended up in Australia as a result of penal transportation.

19 Crimes takes its name from the list of crimes for which people could be sentenced to transportation — offences which ranged from “grand larceny” to “stealing a shroud out of a grave.” Accordingly, each of the labels features one of those thousands of convicts who were transported halfway across the world as their sentence.

Many of these featured people were connected were connected with what’s known as the Catalpa rescue, which broke out six members of the Irish Republican Brotherhood (often referred to as the Fenians) from the penal colony of Western Australia in 1876. On the regular red blend, for example, is John Boyle O’Reilly, an Irishman who joined the Fenians in 1864 to rebel against British rule in Ireland; along with a large group of Fenians, O’Reilly was arrested in February of 1866, tried for treason, and sentenced to death. His sentence was commuted to life imprisonment, and in 1867, he was transported to Western Australia — but he escaped in 1869. He settled in Boston and became a writer, poet, and activist; he also helped mastermind the Catalpa rescue. On the dark red blend called the “Banished” is James Wilson, another Fenian who was arrested in 1866 and tried for desertion and mutinous conduct; his death sentence was commuted to servitude for life, and in 1867, he was transported to Australia. He broke out during the Catalpa rescue. The shiraz features James Kiely, a Fenian who was actually left behind during the Catalpa rescue, but later pardoned in 1905.

Others, however, highlight others who were transported and imprisoned. The “Uprising,” a blend of shiraz, cabernet sauvignon, and grenache aged in rum barrels, is a tribute to the Rum Rebellion of 1808; on its label is Cornelius Dwyer Kane, a law clerk from County Cork who was transported on Oct. 10, 1867 and arrived in Western Australia on Jan. 9, 1868. He was pardoned in 1871 — but, barred from returning to Ireland, he remained in Australia, settling in Queensland. And the Hard Chard — a chardonnay, 19 Crimes’ first and only white — features Jane Castings, who was tried on Mach 2, 1846 and sentenced to seven years for “receiving cheese and bacon knowing the same to have been stolen”; she was transported from London aboard the Sea Queen.

It’s worth noting that the “19 crimes” themselves might be — at least in part — a marketing gimmick; even if they are, though, they do have their basis in the actual history. A few years ago, someone posed the question of what the “19 crimes” actually were to the r/AskAHistorian subreddit, and one Redditor, u/Brassafrax, turned out a terrific response. (I know, I know — anonymous people online aren’t always who they say they are, don’t trust everything you read on the internet, and so on and so forth. For what it’s worth, though, u/Brassafrax has been incredibly active in the r/AskAHistorian subreddit; their area of expertise is legal history — and I was able to verify most of what they wrote independently, so I feel OK taking them at their word here in terms of their credentials.)

According to u/Brassafax, they’d never encountered the specific list used by 19 Crimes in their marketing materials before; however, they did note, “It is true that throughout 1760-1820, a variety of lists were published dubbed ‘Crimes denominated single felonies; punishable by transportation, whipping, imprisonment, the pillory, and hard labour in houses of corrections, according to the nature of the offence.” What’s more, these lists did generally include roughly 20 offences, give or take a few depending on the list; it’s therefore possible that one does exist somewhere with the version 19 Crimes uses for their brand identity.

However, it's worth noting that the image seen in this tweet, which is usually passed around as evidence of the 19 crimes’ existence, might actually just be taken from the label of a bottle of 19 Crimes wine (specifically the "Warden," a red blend):

If you perform a reverse image search on it, Google’s “best guesses” for it are all related to the wine:

So, uh, do with that what you will.

For the curious, the closest match I’ve found to the so-called 19 crimes is documented in a book written by Patrick Colquhoun, founder of the Thames River Police and early proponent of preventive policing, and originally published in 1796. Titled A Treatise on the Police of the Metropolis, it’s one of many treatises Colquhoun wrote on various social issues. Project Gutenberg has the sixth edition of the book, which was published in 1800, available to read online; in this edition, the list of “Crimes denominated Single Felonies; punishable by Transportation, Whipping, Imprisonment, the Pillory, and Hard Labour in Houses of Correction, according to the Nature of the offence” is 22 items long. It reads as follows:

"Grand Larceny, which comprehends every species of Theft above the value of One Shilling, not otherwise distinguished.

Stealing (or receiving when stolen) Ore from Black Lead Mines.

Stealing Letters, or destroying a Letter or Packet, advancing the Postage, and secreting the Money.

Petty Larcenies, or Thefts under one Shilling.

Assaulting with an intent to Rob.

Aliens returning after being ordered out of the kingdom.

Stealing Fish from a Pond or River—Fishing in inclosed [sic] Ponds, and buying stolen Fish.

Stealing Roots, Trees, or Plants, of the value of 5s. or destroying them.

Stealing Children with their apparel.

Bigamy, or Marrying more Wives or Husbands than one (now punishable with transportation).

Assaulting and Cutting, or Burning Clothes.

Manslaughter, or killing another without Malice, &c.

Stealing a Shroud out of a Grave.

Watermen carrying too many passengers in the Thames, if any drowned."

Anyway, you can find out more about 19 Crimes at their website; head here to see where you can get it.