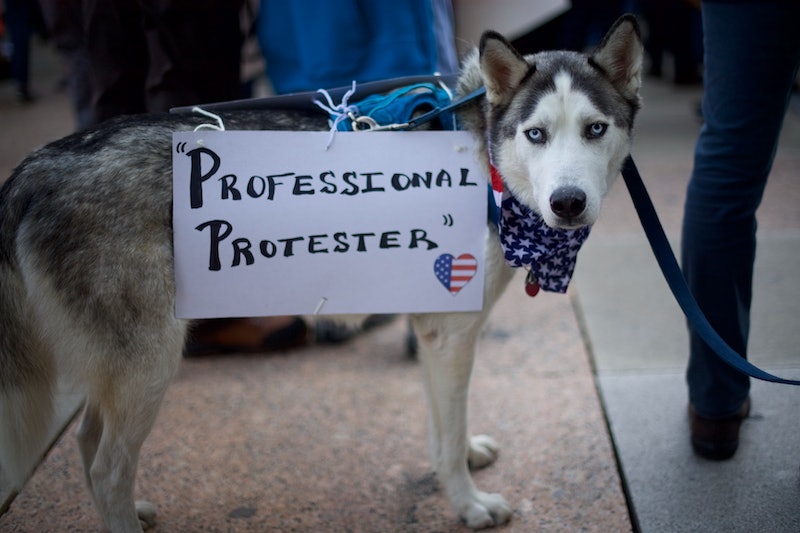 On Saturday, hundreds of thousands of people across the globe marched for equal rights, one day after President Donald Trump was officially sworn into office. Not only did humans show up and stand up for women's rights, but they brought some furry friends along as well. Plenty of dogs were spotted at the marches carrying feminist signs in a show of solidarity to their owners and to women across the globe.

The dogs joined the estimated 2.6 million women marching worldwide. Some were probably there simply because their owners were attending, but others were therapy or service dogs — although, let's be honest, the ones that weren't there specifically for therapy probably provided it in the form of cute pupper faces. Even John Kerry took his dog for a walk at the Women's March on Washington. Like their humans, both male and female dogs participated in the historic event.

Not only did the dogs provide joy to those around them, some of them wore important messages either on their clothing or on signs made by their owners. Others wore pink or pussy hats in silent solidarity. Regardless, all of them look adorable and ready to lead the revolution.

15. I Will Never Be Trump's Poodle

Hopefully the people marching enjoyed the presence of these adorable dogs as they stood up for equality. Since dogs can help reduce stress, it's likely their attendance at the march provided some self care for some of the participants. But they also spread some empowerment in the form of their feminist signs.

More like this
Iran Has Issued A Death Sentence Over Mahsa Amini Protests
By Catharina Cheung, Darshita Goyal and Maxine Harrison
MOBO Awards Found Kanya King On The Woman Whose Grit & Determination Spur Her On
By Kanya King
Amanda Gorman Shared A Powerful Message On Meghan Markle’s Penultimate Podcast
By Darshita Goyal
The David Beckham Qatar Controversy, Explained
By Sophie McEvoy
Get Even More From Bustle — Sign Up For The Newsletter