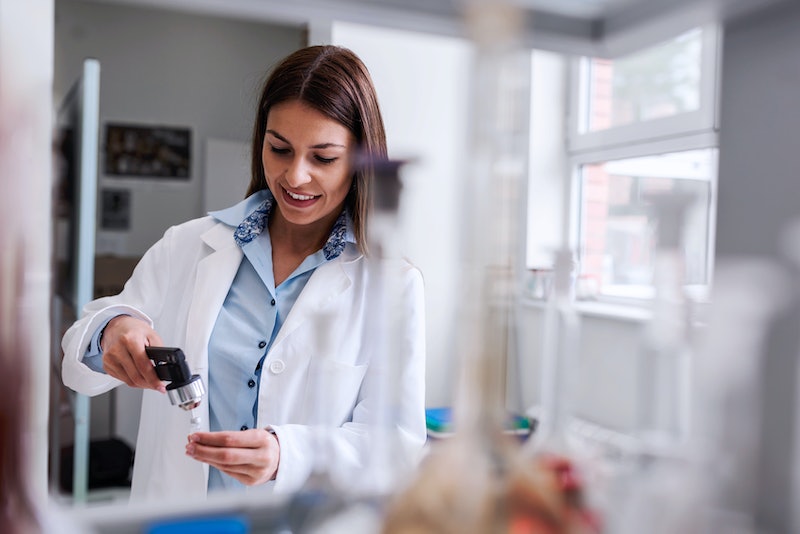 You've likely heard of female scientific stalwarts like Marie Curie — whose research in the field of radioactivity led to the invention of the x-ray machine — or Rosalind Crick, whose contributions to our understanding of DNA may have been as important as Watson and Crick's. But a recent report took a look at which inventions are helping us live longer than ever — and female scientists have a hand in a huge number of them. Underestimating or erasing the contributions of female inventors and innovators from history is hardly new, but it's particularly crucial that we know who did the most to make human life healthier and longer over the course of the 20th and 21st centuries. We all owe them a debt, whether it's for inventing vaccines that help children survive illnesses or contributing to the development of nuclear power.

The analysis, which was conducted by researchers at Aperion Care, ranks technology by the estimated number of lives they've saved in the past and will potentially save in the future. Unsurprisingly, it's in the medical field that the biggest overall gains are largely found, and prominent female thinkers and inventors were crucial to many of the most useful discoveries. Blood transfusions are thought to have saved 1 billion lives, and scientists like Audrey Smith, who discovered how to freeze red blood cells in 1950, and Judith Pool and Angela Shannon, who invented a treatment for hemophilia, were crucial to the process' success.

Everywhere you look in medical history, in fact, there's a female thinker holding sh*t down. Antibiotics, which have saved at least 200 million lives? American scientists Elizabeth Hazen and Rachel Brown invented anti-fungal antibiotics in 1950, which treat fungal infections and are still used today. Anti-malarials (50 million lives saved)? Chinese scientist Youyou Tu won a Nobel Prize in 2015 for her work on malaria medication; she isolated a substance, artemisinin, that became the foundation for anti-malarial drugs.

When it comes to vaccines, which have saved at least 1 billion lives, there's a veritable list of contributing female scientists. Dr. Anna Wessels Williams isolated diphtheria in 1894, doctors Pearl Kendrick and Grace Eldering famously worked for years to produce the whooping cough vaccine in the 1930s, and Dr. Isabel Morgan made a breakthrough on polio in the 1940s that helped Jonas Salk create his famous vaccine. And women have helped drug discoveries in general: Dr. Gertrude Elion's work on pharmaceuticals in the 1950s led to the invention of HIV/AIDS drugs, which have saved 15 million people — and earned her a Nobel prize.

Beyond medicine, though, other advances have also featured prominent women. Female researchers have been a big part of the discovery of renewable energy sources, which may save up to half a million lives in the future; Hungarian-American scientist Maria Telkes, for example, invented the first solar-powered heating system and solar distiller in the 1930s and '40s. Nuclear power, which the researchers estimate has saved 2 million lives due to its reduction of air pollution, was based on the famous work of radioactivity researchers Marie Curie and Lise Meitner, while the genome-mapping project that may save millions of lives in the future was based on the theories of pioneering theorist Rosalind Franklin in the early 20th century: She was the first to discover DNA's distinctive structure, and we've now unravelling it to help us make medical advances.

Inventions that may not seem like life-savers are, according to the research, actually responsible for a lot of human lives. Air conditioning — which was invented in the 1920s by Willis Carrier, who employed engineer Margaret Ingels to perfect it and introduce it to the American public — is thought to have reduced human deaths by 2 million because temperature control helps prevent heat stroke. And satellites, which were sent into space by Dr. Yvonne Brill and her invention of rocket propulsion systems, have saved at least a quarter of a million lives due to their ability to help track and predict natural disasters.

The 21st-century inventions that may make human life even longer in the future feature large quantities of women on their rolls of honor. Nanotechnology, the field of research that creates machines and other inventions on an impossibly tiny level, owes a lot to female scientists, from Dr. Esther Conwell, whose work is used to make nano-tubing, to Professor Mildred Dresselhaus, who decoded carbon structures and was awarded the Presidential Medal of Freedom by Obama.

So the next time anybody asks why it's important to have women in STEM, you can hand them this list — female scientists' contributions have helped save billions of lives over the past few centuries, and will undoubtedly continue to do so in the future.