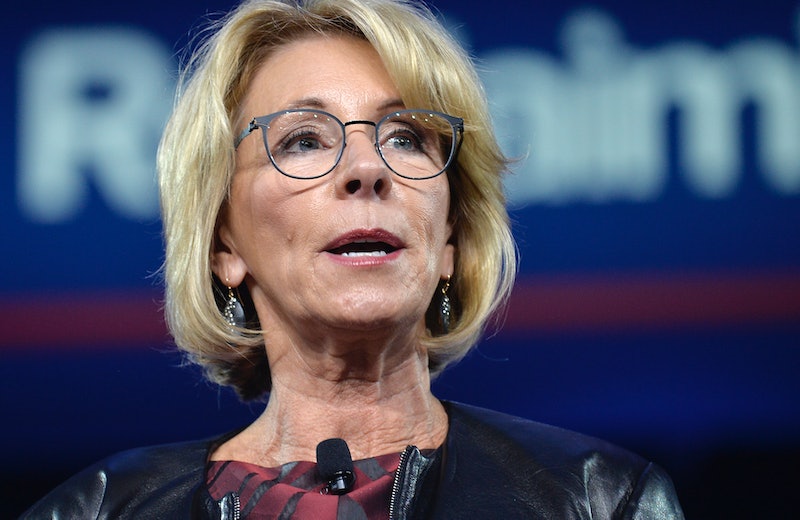 While outlining her issues with the way Title IX is enforced when it comes to campus sexual assault, Betsy DeVos repeatedly mentioned sexual assault survivors and the accused in the same breath, leading many to express frustration that she seemed to be equating the two. DeVos' quotes about Title IX and the "accused" perpetrators of sexual assault had Twitter on edge.

During the speech, DeVos said the Department of Education would be revamping Title IX to "do a better job" at handling sexual assault cases. She did clearly condemn any act of sexual misconduct, calling them "reprehensible, disgusting, and unacceptable." But it was the similar amount of time she spent devoted to talking about those who are accused to sexual assault that had people furious.

"Betsy DeVos wants to better protect accused rapists. The ones who start kissing and don't even wait. When you're a star, they let you do it," wrote Brook Lundy, co-founder of Someecards, subtly mentioning the tape of President Trump bragging about doing whatever he wanted to women because he was famous.

False accusations of sexual assault do happen — but research cited by the National Sexual Violence Research Center shows that somewhere between 2 to 10 percent of accusations are false. Not nearly 50 percent, which many people thought is how much time DeVos devoted to it in her speech about campus sexual assault guidelines and how she plans to replace them.

Here are 19 times DeVos mentioned the affect that Title IX has on the accused.

The "Lives Of The Accused"

"There is no way to avoid the devastating reality of campus sexual misconduct: lives have been lost. Lives of victims. And lives of the accused."

To "Better Understand All Perspectives"

"It requires a serious pursuit of truth. And so, this is why I recently hosted a summit to better understand all perspectives: survivors, falsely accused students and educational institutions, both K-12 and higher ed. I wanted to learn from as many as I could because a conversation that excludes some becomes a conversation for none. We are having this conversation with and for all students."

"Both The Survivor And The Accused"

"The right to appeal may or may not be available to either party. And no one is permitted to talk about what went on behind closed doors."

"The Failed System Failed The Accused"

"Survivors aren't well-served when they are re-traumatized with appeal after appeal because the failed system failed the accused."

"No school or university should deprive any student of his or her ability to pursue their education because the school fears shaming by — or loss of funding from — Washington."

"Rights Of The Accused"

"One university leader was rightly appalled when he was asked by an Office for Civil Rights official: 'Why do you care about the rights of the accused?'"

"Faculty from the University of Pennsylvania's law school also voiced grave concerns about the current approach. They wrote, and I quote, 'it exerts improper pressure upon universities to adopt procedures that do not afford fundamental fairness.'

Too often, they wrote, 'outrage at heinous crimes becomes a justification for shortcuts' in processes."

"Every Student Accused Of Sexual Misconduct"

"Biased Toward Finding A Student Responsible"

"And any school that uses a system biased toward finding a student responsible for sexual misconduct also commits discrimination."

"Boys And Girls Who Are Wrongfully Accused"

"This conversation has too often been framed as a contest between men and women or the rights of sexual misconduct survivors and the due process rights of accused students.

The reality is, however, a different picture.

"The notion that a school must diminish due process rights to better serve the 'victim' only creates more victims."

"If Everything Is Harassment ..."

"Schools have been compelled by Washington to enforce ambiguous and incredibly broad definitions of assault and harassment. .... Any perceived offense can become a full-blown Title IX investigation. But if everything is harassment, then nothing is."

"Schools Which Seek To Punish The Accused"

"But there is a fundamental difference between making these sorts of accommodations for accusers — and schools which seek to punish the accused before a fair decision has been rendered."

"Rights Of Every Student"

"To implement sustainable solutions, institutions must be mindful of the rights of every student. No one benefits from a system that does not have the public's trust — not survivors, not accused students, not institutions and not the public."

"The Center cooperates with local law enforcement and has access to resources to collect and preserve forensic evidence, facilitate — but never require — criminal prosecutions, and apply fair investigative techniques to gather and evaluate all relevant evidence to determine whether sexual misconduct occurred.

This insures that students are not charged by school-based tribunals on the basis of hearsay or incomplete evidence."

"Our interest is in exploring all alternatives that would help schools meet their Title IX obligations and protect all students."

"Lives Have Already been Ruined"

"We can do a better job of preventing misconduct through education rather than reacting after lives have already been ruined."